Pamela left me flabbergasted for two days in a row. . .

Yesterday morning, we felt like pinching ourselves. Steve and I woke up at six in the morning, and our early bird, Miss Pamela, was already out of her nest. Steve ran, and she did not melt down! He headed to an appointment at 8:30 before work and left the laptop at home, and no drama. Then, he drove to the office at about nine in the morning, which was late for him. We were too stunned to spotlight any of these moments.

What do I mean by spotlight? I have not clearly explained my understanding of this technique before, so here goes! The book My Baby Can Dance describes spotlighting, or "the art of communicating to effectively encode an episodic memory," in the following way:

Spotlighting is achieved by any type of contrast or noticeable change in an established rhythm. The adult guide creates clear boundaries around a critical moment in an activity, causing that moment to stand out from its temporal neighbors. Spotlighting is critical for development of episodic memories. Spotlighting is all about contrast. Spotlighting involves making sure that some piece of information stands out from the rest.

What do I mean by episodic memory? I find it easier to understand by contrasting it with procedural memory. Many autistic children excel at storing procedural memory, such as Pamela's recall of the day of the week given any date (future or past). Procedural memory "encodes details leading to specific goals" like a script or sequence of events. It activates a separate neural pathway from episodic memory, which selects meaningful details that fit into the big picture and encodes the emotional context with them as episodes falling into different categories. Episodic memory guides people in making decisions in future episodes.

Since I was not sure how well Pamela encoded the memory of being calm about Steve's early morning run and weird schedule, I exerted a special effort at lunch to spotlight those critical moments. First, I thought about the critical moments in which Pamela usually meltsdown but did not: before the run and leaving for the office without his briefcase. Then, I spotlighted those moments in our conversation and focused on the emotion she felt, "Dad went running, and you were so calm" (I smiled and gave her a thumbs up). "He went to an appointment and left for work late, but you were calm and brave." She beamed at me and said, "Not like the crazy lady." (Pamela thinks the Chinese lady melting down at the airport is hilarious.)

Since Steve's schedule vexes Pamela so much, I spotlighted it again later in the day and even filmed it for our consultant. My favorite moment is when I asked Pamela why she was so calm. Pamela started off with her knee-jerk response, "Because I s----," stopped herself, thought for a moment, and said, "Because Dad's going to work today."


Tonight, when Steve came home, he told Pamela his plans to run at 7:30 in the morning and leave for work by 8:30. Unlike yesterday morning, Pamela began to sputter, fuss, and cry; we stayed calm and neutral. This time her reaction was very mild: point five out of ten on the lady-at-the-airport scale. Steve left the room, and I stopped talking and comforted Pamela. I told her that I understood she was upset and rubbed her back. She said, "I'm crying." I replied, "That's okay. You're being brave."

At this point, Pamela must have associated her feeling with that of the lady at the airport. Suddenly, she started laughing and crying at the same time, alternating between thinking about that silly you-tube video and Steve's plans for tomorrow. She giggled so much her tears dried up. I'm not sure Charlotte Mason had this in mind when she talked about changing your thoughts, but it works for me!

Off-Topic Pictures of My Birds Taking Baths or Considering It: 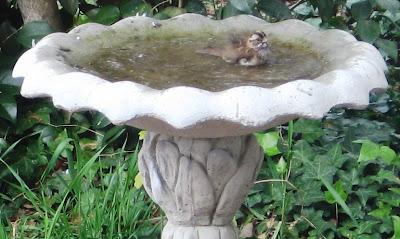 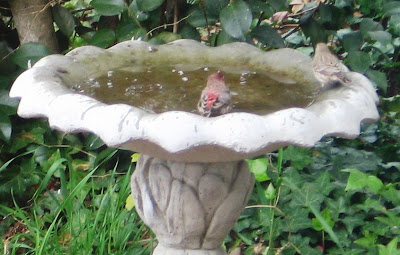 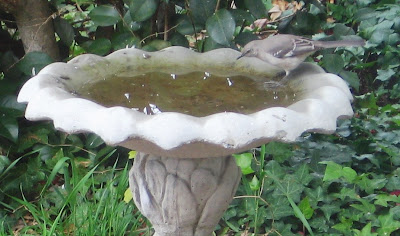 Hi there. I don't know how I lost touch with your blog for a while there. I am so glad I got back to you through Mrs. C's comment section, and I now have you securely in my reader! I love your blog, and how you share about your life with dear Pamela. I feel so encouraged, and not alone. Thank you so much.

I am still in the trying to figure things out mode. I go for a while reading everything I can get my hands on, then I get overloaded and have to take a break. I feel ready for more lately, so I am glad that I can get back to reading all of the great info you have on your blog.

Pamela is almost twenty and there are days I definitely feel like I am still figuring things out! LOL! You are not alone on that front!

I have to tell you, the crazy lady at the airport... I feel like that sometimes. Hey, if I thought for *one second* it would get me my way, I'd do that, too. :]

Good job to Pamela! These routine changes are tough!!