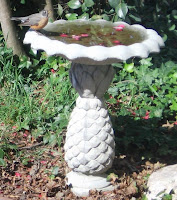 One reason why I enjoy watching birds is because every day unveils something different. Yesterday, I saw another first: robins drinking from our bird bath, as many as four at one time! Robins are everywhere, a welcome sign of spring, especially since the kids and I are down with head colds. Today, Steve and I saw bluejays for the first time ever, three eating seeds strewn on the brick walkway.

Many people with autism prefer things to stay the same, but Pamela had never expressed this to me until last Friday. I debated whether or not to post the video of her mild meltdown and decided against it. Have you seen fodder on You-Tube, like the Chinese woman who missed her flight?

Steve had face time with the dentist, who is half an hour north of us, before going to work, which is seventy-five minutes south of us. After he left the dentist, he realized he would not have time to make it to his office for an important phone call set for eleven o'clock. He decided to call from home and gave me a heads-up on his imminent arrival. We expected Pamela to have a meltdown, and she did not disappoint us! Steve's routine had been predictable for several days in a row, lulling Pamela into a false sense of schedule security.

I experimented with many strategies to keep her cool. Her meltdown was about a three on the Chinese-woman-at-the-airport scale. I told Pamela while she was playing GameBoy and watching television, hoping distraction would prevent meltdown. I answered her questions indirectly, hoping she would slow down and think. When she began to balk, I closed the distance between us to increase her opportunity for referencing, and I stayed calm in neutral when the fur started flying. I avoided matching her drama with my drama, remaining cool and collected in Mr. Roger's tone of voice. I even gave her a bump out of the outburst by sharing some good news: her Netflix DVD had arrived and you can see how quickly she recovered from round one.


Based on feedback from our consultant, I will be adding more strategies to my parenting tool bag. I plan to cut back on my talking even more and rely on nonverbal broadband channels for comfort, label her feelings in a neutral way, let her know I am there to help her work through those feelings, remind her of previous memories of overcoming angst,and bump her into a positively distracting activity.

After Steve arrived, she melted down in the kitchen, dining room, and bedroom, the intensity increasing to a five on the Chinese-woman-at-the-airport scale. She was upset off and on for about 20 minutes and did things like screech, plop herself on the floor, berate me verbally, and grit her teeth. We had a moment of clarity during one of the bedroom meltdowns. Pamela said, "I want the same! I don't like different." Pamela has NEVER been able to express WHY she gets upset so articulately. She gave me insight into what caused her distress, and I have been reflecting on that morsel it all weekend because what she said is highly puzzling!I developed a hypothesis about Pamela's behavior. In January, Steve became more mindful about changing his communication style and working off the same plan as I do in reacting to her outbursts. I suspect Pamela, who perceives way more than she can express, recognizes Steve's change of parenting style. Instead of caving to her will, he now remains calm and neutral and sticks to his plan. She senses losing control of him, even though they still run errands together on weekends when he does indulge some of her more reasonable whims.

I tested this hypothesis in a couple of ways over the weekend. We recently decided to find a new church, so I broke the news to Pamela on Friday. This is a huge change for us since we attended our last church for almost four years. When we went to Wally World after Pamela calmed down, I told her about the new church on the way home. We decided to drive by it and take a peek. She was cool as a cucumber because the difference is not about Steve.

Saturday, Steve followed his weekend ritual: he made a to-do-list that would make Martha Stewart cry. He noticed Pamela bubbled watching him clean the stove, refrigerator, and counters with a special cleaner. She giggled as they headed off to Hardees to pick up breakfast because he was behaving like the same old dad. Later, she discovered his plan to go to Lowe's and asked to join him. Steve had run sevens miles in the morning and told her he needed a siesta before going. Pamela tried to bully him out of it. They were discussing it in the kitchen and Steve said, "See. I'm writing it on my list. 'Take a nap.'" Without missing a beat, Pamela grabbed his pen and scratched it off! Steve did take a catnap, and Pamela did wait patiently with some guiding from me before they left. Then, they went to Lowe's, and Pamela talked Steve into window shopping at Blockbusters on the way home. Before she went to bed, she brought Baby Alive to Steve and told him that her doll was going to watch television with him.

Clearly, Pamela loves bossing her daddy around and I do think controlling his schedule is another way to manipulate him. And that brings us to my theory on the terrible twos, which I will cover in my next post.
Posted by walking at 10:20

Yep, I SOOOOO think you are on the right track. They usually up the ante when they know they are about to lose some control. Weather this storm and I'm willing to bet you'll
be home free on the 'manipulating Daddy' front. LOL!!! Rhonda BTW I CANNOT believe that woman in the airport, I don't believe I've ever seen an adult behave like that, Oh Man!

I have a feeling the poor woman might be somewhere on the spectrum . . . or drunk. When we were waiting for a flight home from Santiago, Chile, to the States, our flight was canceled at two in the morning. Some ugly American had been drinking way too, went ballistic, created an ugly scene, and got a free trip to the drunk tank! Even though Pamela was upset, she was nothing like that woman or the drunk.

So interesting to read about how Pamela trying to boss her Daddy around, as I am watching my two-year old daughter do the same thing! She won't let Johnny get near me and plays little games with withholding affection from him when i am around.