Angels to the Rescue

I have a good excuse for taking a break from blogging all week: VBS. I guided a class of eight to ten--depending on the day--fifth and sixth grade girls, and it was more exhausting than herding cats. The sweetest moment occurred AFTER it ended. I was cleaning up my classroom while Pamela waited for me on the couch. Since I had no back-up plan for Pamela if she became unglued, I did not push her into anything. Whatever she did (usually, music and snack) was completely volunteer. Two girls from my class helped me clean up my room and then headed out into the hall, where other kids and adults were taking colored bulletin board paper off the walls.

Suddenly, Pamela jumped up and offered to help. I joined her, and we worked together to figure out what decorations to keep and what to rip. I started getting her to take tape off the wall and make a tape ball. She loved that, too. Then, she began helping the other kids take the paper off the wall, and I remembered my camera. I ran back to my classroom and grabbed the camera to capture her in action. The best moment of all was when she saw a girl jumping up to pull paper from above the doorway and Pamela tried a little problem solving! She gave the girl a boost, and even though her plan did not pan out, I was exhilarated!

Here is the coolest thing of all. The VBS coordinator had been talking to a friend on the phone saying, "I'm just going to come back on Sunday and clean things up. I am just way too tired to deal with it now." Five minutes later, the Holy Spirit called some angels into action. They eagerly and cheerfully took everything down and stuffed four large trashbags full of paper. The coordinator smiled with joy and relief as a living picture of "many hands make light work" unfolded before her eyes. Their zeal inspired her to join in and wrap up things very quickly. 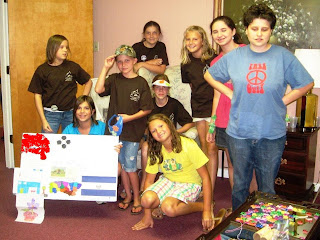 The most important thing about VBS is not crafts, music, Bible lessons, memory verses, money, snacks, etc. What I cherish most is the relationships formed between all involved. Some warm memories I have:


Every day ended with the exciting moment when three boys, representing each team (every class was divided into three colors), raced to the top and won according to the team points (based on points awarded according to their trail journals). I am amazed that our church goes through so much effort to make VBS unforgettable. 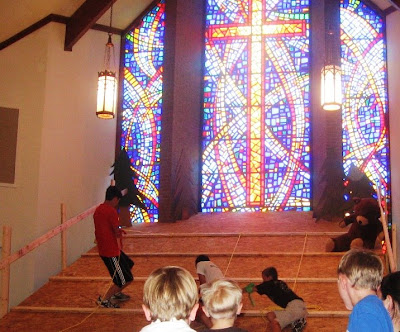 The final cool thing: the kids collected over $300 for a children's home in the area that takes in children with family issues.
Posted by walking at 18:23

What a day full of blessings! :-) I love the way you document Pamela's experiences and her progress in such a vivid way.

Have camera, will travel! so glad you caught this clip, great to see Pamela's problem solving! I missed it when you posted to Facebook so I'm glad I caught it here!

Watching Pamela just makes my day. She is just awesome! You just need a 24 hour a day Pamela cam so we don't miss a thing! (lol)

I think it's terrific that you're able to do this and have Pamela join in too!