The Courtship of Mr. Collins

When I explain what we are doing with Pamela, some people do not get the importance of nonverbal communication, viewing it as insignificant, impossible for autistic people, or cheating to get the right answer to instrumental questions. They even snort and roll their eyes, demonstrating the very point I am trying to make!

Most studies point to the fact that adults with autism, even those with college degrees, struggle for quality of life. Why are they having difficulty staying employed and living independently without assistance? Why do those who yearn for friends and marriage have to settle for living alone without friendships? Rising IQs do not change the outcome nor does learning to speak. Even under the best of circumstances, only one-fourth hold paid employment without extra support, held important social relationships, and maintained a high degree of independence in daily life.

Highly structured, repetition-driven programs often focus on instrumental interactions (using people to get something, not simply to share experiences), spoken language, and academics, ignoring the nuances of nearly item under social interaction in the DSM IV criteria:They often reinforce some of the impairments listed under communication by discouraging alternative modes of nonverbal communication, using scripts to initiate and sustain pseudo-conversations, and teaching make-believe in a way that strips it of its variety, spontaneity, and playfulness: 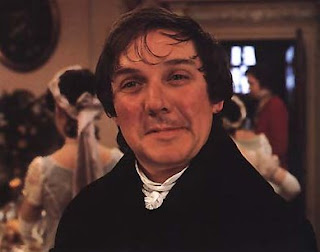 I am trying to balance between developing static intelligence (facts, procedures, mechanics of language) to help Pamela get through school and dynamic intelligence (experience sharing, flexible thinking, problem-solving) to have a life. When we overemphasize static intelligence, we end up with a talkative, smart person with autism. If you do not believe what happens when you ignore the nuances of relationships, I introduce to you, Reverend William Collins, the respectable, at times ridiculous rector of Hunsford in Kent, nephew and heir of Elizabeth Bennet's father, graduate of one of the Universities, about whom Jane Austen wrote,

MR. COLLINS was not a sensible man, and the deficiency of nature had been but little assisted by education or society.

Why is Mr. Collins "one of the stupidest man in England"? (Note: I base this character sketch upon the 1996 Pride and Prejudice mini-series, which is ripe with opportunities for studying dynamic intelligence.) 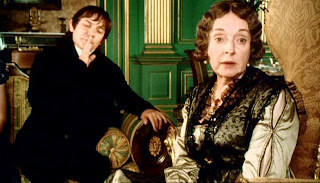 Mr. Collins does not pay attention to the gestures, facial expressions, and noises (a la Lydia's snorts) very well, otherwise he would not have proposed to a woman who despised him (Elizabeth Bennet), ignored a woman who admired him (her sister Mary), and married a woman who only put up with him to avoid becoming a spinster (Charlotte Lucas). His gestures and facial expressions are almost as "unstudied" as the "little elegant compliments" with which he flatters the ladies. 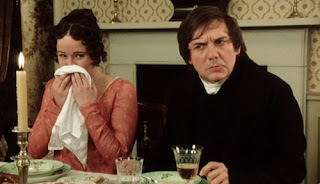 Mr. Collins seems incapable of reading between the lines of dissembling remarks. His cousin Elizabeth words herself to sound complimentary but means something otherwise. When he asked for her permission to play cards, she smiled and said, "With all my heart," because she was glad to be rid of him. After he was invited to a ball, she questioned him with a serious tone, "Would your bishop approve?" hoping he would decline. On the occasion of their last visit to his patroness, Elizabeth mockingly said, "A very cruel deprivation. Indeed, I hardly know how I shall bear the loss of Lady Catherine's company," and he bought it, "You feel it keenly!" When he came to lecture the family after Lydia's fall from grace, Elizabeth dissuaded him from staying any longer, "You may fell that it would be unwise for you to stay any longer now. I always feel that a clergyman cannot be too careful, especially one so fortunate as to enjoy the condescension and the patronage of the Lady Catherine de Bourgh" and he credited her for her thoughtfulness! 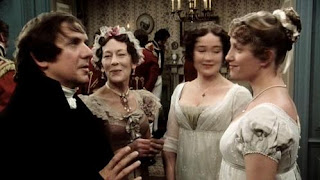 To boost his self-esteem and preserve his job, Mr. Collins discusses one topic and one topic only: his noble patroness the Lady Catherine de Bourgh. He often unwittingly insults his listeners when he lauds her wealth, possessions, and condescension. He practically stalked Mr. Darcy at the Netherfield ball when he found out who Darcy was. 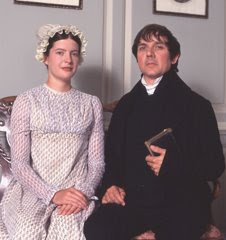 Mr. Collins' courtship reveals how instrumental he is in his interactions with women. When he proposed to Elizabeth, he told her his number one reason for marrying was at the recommendation of Lady Catherine! He also believed it important to set the example for his parish and it might make him happy in the process. He felt obligated to marry one of the Bennet girls because he was to inherit their father's property. As an afterthought, he mentioned his violent affections for her, never bothering to read her expressions of dismay. When she refused, he pointed out the benefits of marrying him: not only did he have money, situation, and connections, but she might end up as a spinster if he refused.
Posted by walking at 23:43

British upper-class social rules are rather complicated, and I could see myself easily making some rather awful mistakes myself. I thought the SAME THING about Mr. Collins when I saw the movie... he is obsessed with Lady Catherine and can tell you how many windows she has in her house, how much the glazing cost, etc. Lady Catherine feeds on this sort of adulation and the control she has in the lives of other people.

Being a non-verbal "communicating partner" is so important! :) The illustrations using Mr Collins are really nice, Tammy!

Mrs. C, I would struggle with all of the rules too. However, that is the beauty of nonverbal communication. He could have made fewer blunders if he had paid closer attention to the facial expressions of others and learned to tell the difference between speaking truthfully and dissembling.

Very thoughtful interpretations on Mr. collins! I once saw a book a long time ago that looked interesting by Tony Attwood discussing how all of the characters in the Pride and Prejudice novel have autistic tendencies...i chuckled when I thought of it. It was what made each person so interesting!

Please allow me to add that you so eloquently explain such an important deficit of autism that is much ignored, the social/emotional development and how ABA and other therapies can fall short. What a great demonstration of how just speech alone stripped of spontanaeity and true interaction is not how to help our children with autism grow and become independent people. You always get me thinking deeply, Mrs. Glaser! Thank you!

One more thing, do you think that this "self-centeredness" is just a sign of maybe immature brain development? Maybe somewhat stuck in a stage of infantile/toddler?

Oooo . . . I did not realize Tony Attwood noticed it, too . . . I was did a presentation on learning styles and picked Mr. Darcy as my example for abstract sequential . . .

I have some children on the spectrum with whom I have been working on social skills. I ran across "Pride and Prejudice" just a few weeks ago and was struck by how much the story involved a wide variety of social skills. I am in the process of having my 2 teens read the book so that we can discuss them!

How neat to find your blog entry that runs along similar lines!

Apparently, we are both in good company, Grace, for Tony Atwood has observed the same thing . . .