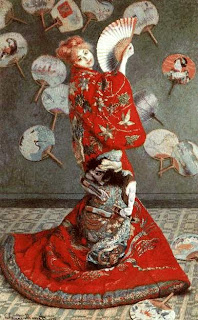 Thursday, Pamela and I did our first picture talk on Monet, blending Charlotte Mason, RDI, and Visualizing and Verbalizing. Charlotte Mason was way ahead of the game in V&V because she suggested a portion of the out-of-door life for children under six must include "sight-seeing" and "picture-painting" (Volume 1, pages 45-51):
With a non-verbal child, foundations for this activity are built by exploring an area together, pointing, smiling, nodding, and sharing simple words with delighted facial expressions and joyful vocal tones . . . smelling flowers and listening for birds . . . filling the bird feeders and quietly watching friends arrive (even furry ones) . . . planting quick-growing seeds and checking their progress every day. . . leaving out sugar for ants and watching what they do . . . watching bees and butterflies flit from flower to flower . . . laying on the ground and studying the clouds . . . sitting on the porch watching a storm in all its glory . . . spying a shy little gecko (which may even bring on a GEICO commercial stim).

Charlotte Mason did not believe in formal lesson plans for young children (this blogger has great ideas for teaching without worksheets). Once they turn six or seven or eight, they were usually ready for short (no-more-than-15-minute) lessons like picture-talks. If you could reduce a lesson to boiler plate, it would be: review and preview, study, narrate (with materials put away), and discuss. We are not putting away the pictures because Pamela needs practice narrating what she sees; in time, I think she will be able to do a picture-talk exactly as described.

Review and Preview - Pamela shares what she remembers of Madame Monet in Japanese Costume, and I give her a little bit more background information about the Monets. First, Pamela remembered the woman, so I gave Pamela her name, Alice Monet, the wife of Claude Monet. She told me he was the husband, and I mentioned that he was an artist in France. Pamela remember that Alice wore the "butterfly red dress." I gave her a new vocabulary word for a Japanese dress, kimono. Then, we recalled the gestalt, "Alice was wearing a kimono and dancing with a fan." 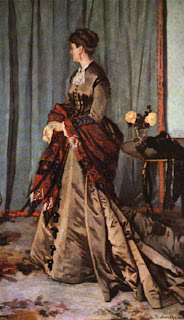 Study - In a typical lesson, the child focuses full attention on a passage to read, a picture to see, or an object of nature to watch. Once the child is ready, you would put away the material and go to the next step. We are combining the steps of study and narration because Pamela is still working on her narration, or expressive language, which has improved so much in the past five years that she is almost ready to describe what she sees in her mind! (I encourage parents of non- and low-verbal children to never say never!)

Narrate - Pamela tells me what she sees. If she were narrating from memory, I would not interrupt her. Since we are practicing the art of verbally painting a picture, in this case Madame Gaudibert, I am asking questions only when she does not give enough information about an item. First, she talked about the woman's clothing, her hair. She described the background: the floor, the wall curtain, and a table with a vase.


Discuss - In our grand conversation, I point out what I see and comment on any differences. Then, we talk about what it reminds me of. We talked about the curtain being bigger than I imagined and the number of flowers. I introduced two new vocabulary words with gestures to illustrate them, shawl and bun. When Pamela said the lady reminded her of Topsy-Turvy, a movie about Gilbert and Sullivan set in the late 1800s, I nearly fell out of my chair! Pamela made a wonderful gestalt connection between the style of dress in Monet's picture to a movie set in the same time period! When I mentioned the late 1800s, she said, "19th century" and my mention of England caused her to guess, "London"--other neat connections. I told Pamela it reminded me of Laura Ingalls wedding dress, and she too lived in the late 1800s. In this clip, you see the science of relations in action, having a relationship with the object of study, making connections, and linking known (Topsy-Turvy and Laura) to unknown (Claude Monet). This kind of thinking transfers into long-term memory more easily (for greater detail on this process, read Dr. Carroll Smith's article "Is Sequencing and Ordering the Curriculum Important for Scaffolding Learning?".)


You may have been distracted by the balloon. If we were in a classroom where she might disturb other children, I would give Pamela something like play-dough for a fidget toy. The point of our activity was language development, and, as long as Pamela stayed on task, I did not worry about the balloon. The lovely consequence of my decision to let it alone is a recording of Pamela blowing up a balloon, tying it all by herself, and asking me to pop it--something, she would not and could not do two months ago!

THIS makes my heart sing!

I have been looking into the C.M. learning program. My son is non verbal (he can remember and repeat anything) but he can't hold a conversation. I believe he can understand what we say to him (he is 4)but we cannot understand him most of the time.

You can NEVER take this blog down. I have had a hard time finding info on homeschooling my moderate Autistic son, and when I stumbled upon Pamela's web page, it lead me here. I feel like a kid in a candy store! It will take weeks to get through all the stuff you have on here and I am eager to plow through it.

My son is a visual learner, so I am going to try this "making connections" through pictures like you have shown here, only on a smaller scale.

Pamela's progress has given me hope.

Pamela is a beautiful example of never giving up on balancing personhood with trying new ideas until you hit something that works without driving the family into the habit of frustration.