Oh NUTS! Peanuts, to be exact! I just read the label more carefully . . . the Cinnamon Chex have both MILK and PEANUT flour--why can't General Mills get it right!

Don't worry, Pamela didn't eat any . . . only the Rice, Corn, and Honey Nut Chex are safe for her . . . except that their product formulation is subject to change . . . read the fine print folks! 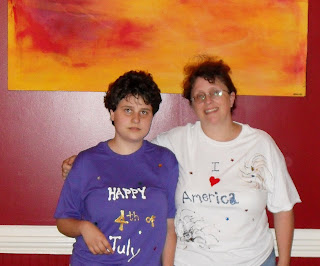 During last Monday's RDA, Pamela and our consultant went to Chick-fil-A for lunch, bought T-shirt supplies, and made two shirts to celebrate Independence Day. Our consultant assessed many aspects of Pamela's co-regulation/collaboration and social observation.

Recalling their lunch date last August in which Pamela was the French fry thief, our consultant warned her she might steal fries this time. At the restaurant, Pamela wanted more ketchup at lunch. She looked at our consultant and said, "Don't steal it." Pamela monitored her the whole time, preventing any pilfering. At home, Pamela has observed that, when she leaves the computer to use the bathroom, one of us starts surfing the net. Lately, she has been telling us, "Don't touch it. I'll be right back." Such actions are part of social referencing, which means regulating your own behavior in response to the behavior of others. 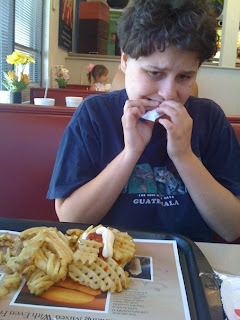 Pamela accepts the idea that she has different likes and dislikes from other people. Her way of eating fries grossed out our consultant (ketchup, mustard, AND mayonnaise), but Pamela stuck with the way she likes her fries. Being aware of these differences between people is a sign of separating self from others. It also paves the way for positive collaboration. Earlier in the day, Pamela stated she did not want to shop but agreed to make T-shirts. After learning that they had no supplies on hand, Pamela agreed to hit the craft store. While looking at shirts, our consultant blabbed about red, white, and blue for patriotic T-shirts, but Pamela chose purple. While our consultant chose white and seemed surprised at Pamela's choice, Pamela did not change her own mind nor did she try to control the color of the other shirt. She showed great flexibility.

Our consultant noticed emerging collaboration skills while they made the shirts. She pretended to struggle to unwrap plastic covering the paint bottles and began to act frustrated. Pamela noticed her struggle and reminded her to breathe by breathing loudly herself because she was having word retrieval glitches. Then, she began handing our consultant different tools to see which one was most effective at tearing off the plastic. While painting, our consultant looked over to the paper towels to see if Pamela wanted any. Pamela was monitoring her closely because she said, "Paper towels . . . no."

Cinnamon Chex have both MILK and PEANUT flour . . . 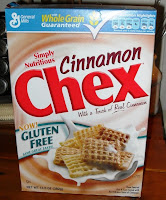 RDI is different from most therapies in that we all have goals. Steve is going to practice giving Pamela more thinkspace, while I am going to avoid overcompensating by being a bit unreliable, less intuitive, more silly, and ditzy. Our overarching goal for Pamela will be for to separate herself from others through a same, but different framework and to monitor situations and people more carefully. Because RDI focuses on dynamic thinking, we end up taking advantage of situations that happen on the fly. Today, one popped up when I noticed that Rice Chex is now gluten free!

The very specific objective for this week is to give Pamela an opportunity to read my visual reaction before I tell her what I am thinking. She needs to take responsibility for monitoring my reactions without any guiding from me. One the way home from the store, I worked out the scenario in my head: leave the hatch up with the cereal in the car. With her Monk-like attention to detail, I knew she would notice the hatch and everything would unfold beautifully. Or so I thought!

Everything went according to plan until Steve walked in ahead of Pamela. He did not know my plan, so he inadvertently distracted her. I decided to gasp to see if she would shift attention to me, and she did! At first, Pamela reacted negatively to the cereal because she thought she could not have it. She saw my positive reaction and realized the cereal was gluten-free and that she could not have it. I did not give her my verbal opinion until after we celebrated.

Cinnamon Chex have both MILK and PEANUT flour . . .

Cinnamon Chex have both MILK and PEANUT flour . . .
Posted by walking at 20:10

A young lady after my own heart. My favorite color is purple so I think that was a wise choice. I eat french fries with ketchup and mayo. I might give mustard a try...Pamela I will let you know if I do try it.

Since I am new to your site, I have been reading a lot of the older posts along with the new ones. What progress!

Purple suits her very well and why not show a little individuality on Independence Day!

Yes, some of the before and after is quite amazing . . . it just shows that even autistic brains are more plastic than originally thought!