The Map Game and Inklings of Negative Numbers

We started a new game yesterday to work on the concept of negative. Sometimes, people express South latitude and West longitude with a negative sign. I want to Pamela to see negative numbers in a "same, but different" framework. I found a map with straight lines marking latitude and longitude, so that the intersection of two lines on the map is a spot upon which a player can land. Crossing the equator is the same conceptually as crossing zero on a number line. It is different because you are working with maps, instead of money.

I chose a region of Africa where you can travel along the equator and still be on land for many moves. The area is covers a rectangle from (10 N, 0 E) to (10 S, 0 E) to (10 N, 45 E) to (10 S, 45 E). Crossing the equator is the same conceptually as crossing zero on a number line. It is different because you are working with maps, instead of money. After much finagling in Excel, I managed to create a document with grids that marked every degree of latitude and every five degrees of longitude. I made the equator red. I copied it into Word and uploaded it here in Google Docs if you want to give it a try. 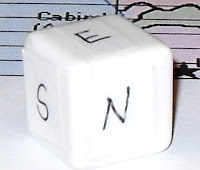 The game uses two die: one regular dice with one to six dots on each side and the other with two N's for north, two S's for south, and two E's for east. That way players bounce around the equator more than they head east, but eventually they head east. The game ends when the first player arrives in Kenya.

Suppose the next player at (2 N, 10 E) like the yellow peg. If she rolls S 5, then she moves five jumps to the south and ends up at (3 S, 10 E). Conceptually, this player started in positive territory and landed in negative territory.

Sometimes, a player reaches an edge. If he rolls something that would take him off the map, the player stays put and hopes for a better roll next time. We found this heightened the anxiety and anticipation during the game.

This game works on many levels. First, Pamela is exploring the concept of negative. Once she is experienced, we will start keeping track of all movements south and north by writing it down like the money game. While playing the game, we sometimes talked about where we were on the map, which is geography, of course, not to mention exposure to the ideas of latitude and longitude. We worked on likes and dislikes because Pamela was trying to guess which peg I wanted by reading my facial expression. She is not much of a game player, but, as I pretended to grow frustrated about being stuck in the Indian Ocean, she started to reference my reactions. Pamela saw what I needed to roll and, before I rolled, she began to anticipate what might happen and laughed when I got a bad roll. When the same thing happened to her, she found it funny, too.

The other exciting moment occurred when Pamela played the money game. Since Pamela understands the play of the game, I reduced my verbals greatly and let her take responsibility for keeping the game going. She had five cents (a nickel) and wanted to buy a fish for nine cents. She knew she did not have enough money, so she found an IOU for four cents and paid for the fish that way. In essence, she just applied the following equation in her mind:

You are an amazing, creative lady! I really admire the seamless way you blend RDI objectives and philosophy, CM homeschooling, and traditional academics.

I'd like to try this with my 3 kiddos soon.

I'm creative when it comes to math . . . I think the seamlessness happens because RDI blends so well with CM, and, when I rethink academics with CM in mind, it blends nicely with RDI. In short, I am standing on the shoulders of giants, which releases the creative juices . . .

I really enjoyed watching Pamela's facial expressions..... the referencing for the colour and her excitement in various aspects of the game. I was going to ask you about your previous video footage when you used a lot of verbal (I am not used to that because of Nick being non-verbal). When introducing a new concept do you use a lot of language and then fade it as you see Pamela feeling more compentent? I use mainly declaratives with Nick and keep things short and simple. He blew me away this afternoon......He was stimming away happily on the computer, and I said "lets go and get the washing in". He immediately came outside and when I said "we need a basket for the washing" he promptly went to the laundry to collect one. I wish I had filmed it. All thanks to RDI

Di, since I was teaching her the rules of a game, I figured I needed to be more verbal. Once she got the hang of the rules, we went into guided thinking in our reactions, the pacing, etc. I did that to scaffold her more since rules are more of a static thing. When it comes to concepts, I try to be more declarative. But, the rules of a static game are a bit instrumental by nature . . .

I saw the pictures of Nick at your blog. He has the same beautiful smile as Pamela!

Pamela loves the ideas of chores and earning money . . . I think I've created a monster! LOL!

Hi Tammy
Thanks for clarifying your use of verbal etc. It was helpful to hear your perspective.
I laughed when you mentioned my blog.....what blog!! I am afraid I don't have your dedication to make the blog interesting, informative and must have for all bloggers lol.
I think it's brilliant that Pamela has clicked on to chores and money.......all part of natural development. Go Pamela.