Our Second Week in Review

Like I said in last week's review, Pamela is clearly in a search for meaning. Sunday morning, Pamela and I had the following conversation that she brought up in reference to our number theory games. Note: She brought up this topic outside of official school hours because her mind is working through these living ideas and she wanted to share her thoughts with me:

Pamela: "What does even dice mean?"

Tammy: "It means up. Two, four, and six are even numbers. Do you know any others?"

Tammy: "Even means it will be spring soon."

Tammy: "Yes! An odd dice is just like the red cards."

Tammy: "That was a very clever thing to figure out. There is a special word for that. I will tell you about it Tuesday in number theory." 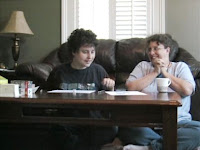 What this conversation tells me is that Pamela saw the link between what I am using for negative and positive numbers in the Time Travelers and the Minnesota Winter games. She understands the idea of having opposite numbers on either side of zero. These concrete games have created a known (odd dice and red cards) to an unknown (negative numbers).

Once again, Pamela adored poetry and told me it was her favorite subject. She connected to Walter de la Mare's "The Cupboard" because it reminded her of where Harry Potter slept in the first two chapters of the book, while "Hide and Seek" reminded her of the Pevensie children. She predicted this poem would be about children and was surprised to imagine the moon, wind, waves, and clouds playing the game. While I read aloud to her "The Window"--her favorite, Pamela looked through the shutters to watch our neighbors doing yardwork. The following is what we accomplished last week, according to plan. We are not at full schedule yet, but we managed to pull this off in 4 hours a day.

Spanish
The new kid on the block was Spanish. I did not plan to try Spanish again since Pamela is just making strides in English as a first language. Deep conversations about teaching foreign language with other Charlotte Mason educators have convinced me otherwise. They believe in focusing on oral language and building an ear to avoid getting lost in grammar and syntax.

Steve, a native speaker in both Spanish and English, agreed based on his experience. He learned English from his parents at home and spoke Spanish elsewhere, including the local parochial school. Even though he NEVER took a formal class in English (NEVER), he managed to score well enough on the language section of the ACT to enroll in college in the United States. He earned A's in his remedial English classes.

How did he learn to read and write in English? He taught himself! Learning to read and write Spanish enabled him to do the same in English. His parents never taught him formally and, like his siblings, he figured it out on his own. Steve and his five siblings managed to accomplish the same feat and earn bachelor's degrees in the United States without the special programs available for English as a Second Language.

What was their secret? Being orally fluent in English! Charlotte Mason wrote, "French should be acquired as English is, not as a grammar, but as a living speech. To train the ear to distinguish and the lips to produce the French vocables is a valuable part of the education of the senses, and one which can hardly be undertaken too soon" (Volume 1, page 300). Pamela is twenty, and I am over twice her age, so we are relying on the "better late than never" theory! My plan is to focus on developing vocabulary used in every day life and learning Spanish nursery songs that Steve learned as a child.

With the help of some free online resources (hat tip: Masterpiece Theater), we focused on answering feeling questions for girls--boy feelings here--letting us practice facial expressions and body language. After doing a very short lesson together in a shared experience fashion, I said in a flat voice, "Me siento feliz" or "Estoy enojada," and Pamela showed her understanding by acting the feeling while repeating my words. If she said a feeling in Spanish, then I acted it out and said a complete sentence. Sometimes during the day, I asked, "¿Cómo se siente hoy?" and waited for her to share her feelings or I shared my feeling, "Estoy cansada," after a hard workout. Pamela loves saying, "Hola," and I often followed up with "Hola. ¿Cómo se siente hoy?" 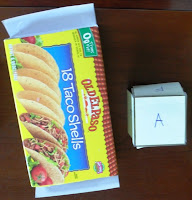 Mathematics
We continued splitting time between geometry, number theory, and algebra/arithmetic. In geometry, Pamela continued to work on measuring in both inches and centimeters, calculating the area of triangle and rectangles (not with formulas, but through understanding the process, doing things like drawing a rectangle around the triangle, finding the area of the rectangle, and taking half of it). On Friday, we started doing the surface area of real things like a plastic cube that holds paper clips and an empty taco shells. In number theory, Pamela played various games that preview the concept of negative and handled every combination of adding positive and negative numbers. In algebra/arithmetic, we reviewed fractions and covered comparing fractions with the same denominator or the same numerator, comparing whole versus fractions, and comparing half versus fractions.

History
We worked out of five books for our two threads of ancient history, and Pamela added pages to the book of centuries we started last year. For the most ancient of history, Pamela read and wrote a narration of Cain and his extended family (Chapter 5 of Adam and His Kin and Genesis 4:16-26 from an illustrated version of Genesis). For the era leading to the birth of Jesus, she read passages about Joseph's dream (Matthew 1:18-25 from an illustrated version of The New Testament) and the Ides of March and Cleopatra and her son (Augustus Caesar's World).

Language Arts
Pamela did studied dictation of a one page story about Heracles and three golden apples. She kept practicing her recitation of The Horseman for recitation. She practiced articulation through reciting, reading aloud poems, and singing songs. She typed narrations of Watership Down, Pandora, and her history readings. Pamela copied the story Who Took the Farmer's Hat? into her copy journal for penmanship. She took a picture and typed a story about her beanie babies. Pamela orally narrated her readings and two paintings by Monet. 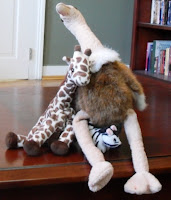 My mother put the peach-brown-and-white ostrich with the long peach beak, the black-and-white zebra with the black stripes and the yellow-and-brown giraffe with the brown spots on the green-blue-and-white cup.

Literature
Pamela read five poems by Walter de la Mare, one chapter of Watership Down, one chapter of Little Women, and two chapters of Harry Potter and the Sorceror's Stone (her request for this year).

Geography
Whenever we start a fiction book set in a particular location, we always pull out the atlas: this week, we found England and Massachusetts. We studied a map of Egypt and another depicting the conquests of Julius Caesar. I plan to start a travel book next week to fill out geography.

Life Skills
Pamela learned to enter various types of data in Excel: date, time, fraction. She practiced tricks like autofill, autocomplete, and current date [Ctrl ;] and time [Ctrl Shift ;] and navigated through the workbook with the enter, tab, and arrow keys. She decided which way to turn during our daily walks, taking a different path every day. While sometimes we took the dog with us (even the principal once), we headed to the Post Office to mail eBay packages twice. 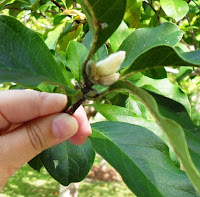 Recreation
We exercised by walking the dog or walking to the post office. Pamela painted a tree in her nature journal. We noticed these interesting buds and plan to investigate them further next week. Pamela nearly has the melody for Blessed Assurance and Land of the Silver Birch. We listened to Mozart in the car and did two picture studies on Monet: The Walk, a Woman with a Parasol and The Red Kerchief.
Posted by walking at 20:22

>>I plan to start a travel book next week to fill out geography.>>

Tammy, what is a travel book?
Rhonda

A book describing someone's travels and adventures. We are reading World Trek, a book about a family that took a trip around the world back in 2001.