Life got in the way of blogging, so I'm combining weeks three and four, both made of four days due to Labor Day and the local school district teacher's administration day (Pamela likes having her school year line up with everyone else's). We are now full steam ahead, working five hours or less a day (including exercise and practical skills).

My favorite moment in Week Three was when Pamela called Ctrl-Z (the undo feature of Excel) "rewinding". In Week Four, I loved her use of dynamic thinking. On Thursday, Pamela reflected that we had Friday off and said to me, "Tomorrow is to be continued." I suspected she hoped to split up the work between two days, so I asked if she wanted half days. She told me, "Twenty-two more, eleven today." After studying her schedule, she adjusted her plan to twelve on Thursday and ten on Friday. That is what I call dynamic thinking, which is the point of RDI! 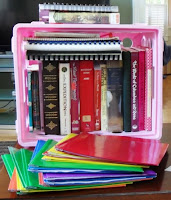 Spanish
Pamela and I continued to practice sharing our feelings in Spanish plus we reviewed colors and learned pets. To mix things up, one day we colored a picture, saying the names of the colors in Spanish and we played "I Spy" in Spanish, Yo veo . . . morado. Pamela's favorite Spanish word is for orange. She may have struggled with aphasia most of her life, but the word anaranjado glides off her tongue like silk. We added Los pollitos dicen, which Steve learned as a child, to our sing-a-long time. Pamela loved figuring out many of the words by watching the video on youtube. 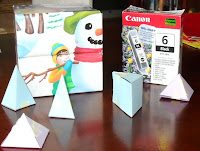 Mathematics
We continued splitting time between geometry, number theory, and algebra/arithmetic. In geometry, not only did we cover the idea of 0-D (point), 1-D (line), 2-D (plane), 3-D (solid), and square units for problems without measurements, we hit surface area from many perspectives, doing problems from Lesson 15 in Math-U-See's Pre-Algebra:

Because Pamela has not completely mastered these ideas after four weeks of work, one thing is clear: she could not have come this far in only one week which the book suggests is possible! I still plan to introduce volume next week while continuing to hone Pamela's ability to calculate surface area.

In number theory, Pamela played more games involving the concept of negative and, for the first time, we used that words negative and positive as we transitioned to working on a number line, doing word problems, and providing answers for problems in numbers and symbols. Because of Pamela's aphasia, I developed a long list of situations that go with negative (buy, owe, lost, pay, spend, etc.) and positive (earn, found, have, received, sell, etc.). She even worked some problems from Lesson 1 of Math-U-See's Pre-Algebra. In algebra, we reviewed fractions (falling back on blocks and drawings as necessary): comparing, adding, subtracting, reducing, and proper/improper/equivalent fractions.

History
We worked out of six books for our history threads, and Pamela added pages to the book of centuries. For the most ancient of history, Pamela read and wrote a narration of Seth and his extended family, including Enoch's startling story (Adam and His Kin and an illustrated version of Genesis). For the era leading to the birth of Jesus, she read passages about the births of John the Baptist and Jesus (an illustrated version of The New Testament) and the family of Octavius, Cicero, the five conspirators (Brutus and kin), and Mark Antony (Augustus Caesar's World). We read the myths behind the founding of Britain in Our Island Story and read about the early childhood of Christopher Columbus and Isabela of Castile in a time when Mohammed II was eying Europe (The World of Columbus and Sons). 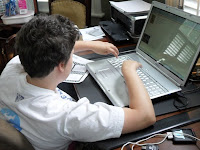 Language Arts
Pamela did studied dictation of two myths, Egyptian Creation and Gilgamesh's Flood, requiring no special lessons. She wrapped up her recitation of The Horseman. She practiced articulation through reciting, reading aloud poems, and singing songs. She typed narrations of Watership Down, myths, and her history readings and wrote notes for geography and literature. Pamela copied the story "A Rainbow for Sarah" into her copy journal for penmanship. She took several pictures and typed stories about her beanie babies. Pamela orally narrated her readings and paintings by Monet. 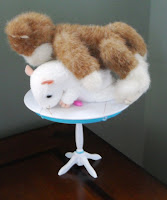 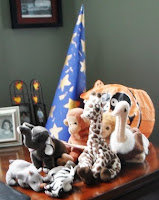 Animals
My mom with a wand had a pumpkin. She was waving a wand and made magic. The elephant and giraffe were on the brown deck. They were six: the elephant, hippo, giraffe, monkey, lion and ostrich. They were two: rhino and zebra. The pink shoe was small. It sat on the lion.

Geography
Charlotte Mason covered geography through interesting travel books. Pamela followed the Fisher family on their WorldTrek through England, Ireland, and Norway. To help her better visualize their journey, I created pages in a folder with pictures and maps. To supplement our other readings, we studied maps of ancient Rome plus Europe, Northern Africa, and the Middle Ages in the fifteenth century.

Life Skills
Pamela finished her first introductory course in Excel and started a new one about typing formulas (I learned a new trick about the Auto-Sum feature). She decided where to go during our daily walks and delighted herself by exploring a street we have never walked or driven. Pamela is learning to crochet chains, which requires such effort that we can only work at it five minutes at a time. She has mastered phase I (hooking with her left hand), and I started her on phase II (controlling the yarn and chain with her right hand). 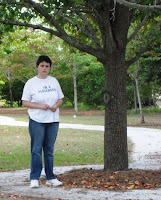 Recreation
We exercised by walking the dog. Pamela painted in her nature journal. Pamela classified her first tree (the flowering dogwood on the left), noticed lichen, and joined me for Green Hour Challenge #1. Pamela sings Blessed Assurance, Land of the Silver Birch, and Los Pollitos Dicen well and even adjusts her pace to mine when I deliberately spend up or slow down to assess her co-regulation skills. We listened to Mozart in the car and did four picture studies of Monet's water lilies.
Posted by walking at 19:05

You guys got a lot of great stuff done! Brava! My boys are still making me want to pull my hair out every other day. ;D

Pamela is a very delightful student . . . David is my challenge and official instigator of hair pulling sessions. If you can believe it, he is easier as a teen than he was as a child!