A Is for pre-Algebra 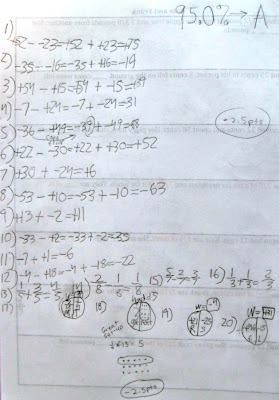 We are working through our pre-algebra plan, and Pamela is doing very well (the end of this post lists our math posts for the school year). Last week, she did a fantastic job on her second test in pre-algebra. Her two minor mistakes were (1) copying a number incorrectly and (2) miscalculating 1/3 of 15. She never asked for help during her test, nor did she need it! You may be wondering what the last four problems mean. Pamela set up whole-part pies to help her solve word problems. She writes the word that goes with the whole and the words that go with the parts (including the correct amount of slices in the pie--sometimes, there are more than two parts). She writes in numbers for the known, and an empty box for the unknown. When she figures out the answer, she writes it in the empty box.

The word problems were were:

20) Jake found 46 coins on the beach with his metal detector, but lost 15 out of his pocket later that day. How many coins did Jake have left?

Those of you who are good at math may be thinking that November is late to be taking only the second test. Because of my unusual plan for a 36-week schedule (we are doing the tenth week right now), Pamela is taking the tests in chronological order. That means in the last month of school she may take a couple of tests a week, but, because she truly discovered knowledge for her self through our living math approach, she has approached each one with confidence!

P.S. Stay tuned for an exciting announcement in the near future concerning what we will be using for algebra and geometry next year . . .
Posted by walking at 05:47