Whatever Happened to David G? Part I 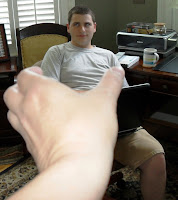 Since the summer, I have been rather quiet about our son David. Don't let the forced perspective photograph fool you. He was not captured by a giant!

Exactly a year ago, David asked us to attend school away from home. While I was not thrilled at the idea, we realized that he would be seventeen by the time school started in the fall of 2009. He was old enough to make a decision like that. So, we laid down firm guidelines to get him ready for the transition: 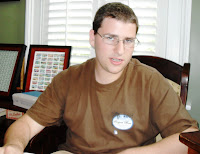 I thought those requirements stringent enough to dampen his ardor for school, but David surprised me. We saw a complete change in his attitude, and he showed us more autonomy and discipline than we had ever seen. He whipped through math and chemistry almost at the speed of light. During the summer, we had his eyes checked and he needed glasses (very mild issue unlike his mother who is legally blind without her specs). He saw the dentist and doctor since we would no longer have the luxury of scheduling appointments whenever.

We got him current on the bare minimum shots, and he only needed the MMR. Even though David did not react to vaccinations like his sister did, we were still cautious enough to say no to anything not required. And, boy, did I have to stand up to the nurse. His shot record clearly showed that he had three out of three required HepB at birth, one-month, and two-months of age. Unfortunately, they dated the first one as "at birth." Because the record did not state the actual date, she wanted to redo that. The nurse actually made a long-distance phone call to her supervisor in Columbia to get the okay to approve. Did they understand they were dealing with a Warrior Mom who had survived twenty years in the trenches of autism? I won, of course!

We quickly ruled out the local private school in town. While David was technically born in the south, southern Louisiana is unlike Carolina. He spent most of his life in the land of Yankees, cowboys, Native Alaskan fishermen, and MinneSOta nice. From personal experience, he had already figured out that his gypsy ways and nonconformist thinking would not bode well in a conformity machine of jocks, hunters, preps, and beauty queens. So, we opted for the public school where the population is diverse enough to accept him for the person he is.

We set up an appointment with the principal who runs a tight ship. He gave us a tour of the school and pointed out that block scheduling allows students to carry everything they need in a backpack. After the principal banned lockers, excuses to be roaming the halls melted away and so did forty percent of their disciplinary problems. Although we live in a small town, the school has the same problems as other public schools (occasional fights, gangsta-wanna-bees, and drugs). That worried us a little bit, but we knew that David's strong-will and resistance-to-conformity would be our ace in the hole. He had never been a risk-taker and had shown great respect for authority in following the transition plan we had outlined earlier. By the way, I asked him the other day if he had ever seen a kid pushed through a plate-glass window in a school fight and he had not. Thus, my junior high school was more violent than his high school!

We found a couple of advantages to the plan. Our town has Christian learning centers adjacent to all schools. When parents grant permission, children may take Bible studies for credit (ancient history, for example). He would have access to the vocational school for computer classes and AP classes in his senior year. David has always loved music and our church lacked a forum for his skills on the electric guitar (mainly, self-taught). The school band was the only high school band from our state to march in the inaugural parade last winter. Their hard-working band director had impressed me at community events with the band's musicianship, responsiveness, and discipline. Having sung for many fabulous directors, I recognized someone who had something to teach. Even if David got nothing out of school, he could learn a lot from this man, and maybe even get a band scholarship for college! 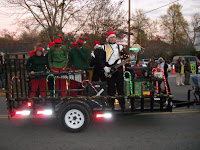 We enrolled him in band camp, and he spent six weeks in the heat of a Carolina summer, learning to march, work with other guitarists, etc. Whenever they messed up or disobeyed, the director had them on the ground doing push-ups. Instead of getting annoyed, especially when he had to do push-ups because of someone else's error, he laughed it off. As a veteran of push-ups myself, it did my heart good to see David drop 'em and do twenty at the end of practice!

How did he do in his first semester? That is upcoming in this blog series!
Posted by walking at 11:00

So proud of you David. This give me something to look forward to from my soon -to- be high schoolers.

Oh that is wonderful !!! Certainly he has done very well and has opinions to this new kind of education!! You made me smile with this blog.

AND Young Victoria is a movie just out in limited release. It is stunning!

Can't wait to hear more... we have a NT son who is 13, but very much wanting to go to school away from home in the future. We are considering this for high school.

Wow, I cant wait to hear more also..I did not know you had a son! Good for you on standing up to that nurse!

Poohder, Bonnie, and Susan, we tried to be as positive as we could during this transition and set David up for success. So far, everything is looking good and I pray David will continue to maintain a solid character in the next three semesters.

Tiff, I've been quiet about David because I didn't want him under a microscope when he was making the big transition . . .