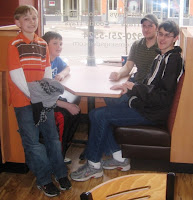 Before I cover the results (or grades--what most people want to know), I wanted to talk about the transition itself. Homeschooling in a rural town with few homeschoolers and people who don't get homeschooling, much less a Charlotte Mason philosophy, was not easy on either of us. Last April, when the opportunity to travel to Minnesota arose, David joined me and spent time with his friends there. We realized how much we missed co-oping with other homeschoolers, talking, hanging out at the park, sharing good books, meeting at the YMCA, etc. I do not miss, however, snow and long winters. 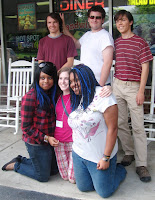 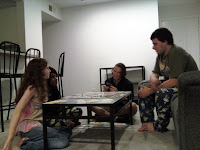 David also attended the Teen Program at the ChildLightUSA Conference in June 2009. He was amazed to meet other teens who had read the same books, who were diverse thinkers, who understood his perspective. They immediately bonded, and he told me that he felt like he had known them all of his life. The program, developed and administered by and for teens, included talks led by a professor about the works of J.R.R. Tolkien, Beatles monopoly games at night, Shakespeare readings (the Pyramus and Thisby scene was a riot from what I heard), Jane Austen tea, nature walks, a musical theory class, a tour of GWU's theatrical department, etc.

One night, a couple of parents dropped in late to hear the Sherlock Holmes reading. We looked at each other puzzled for a few minutes because the tale was much creepier than any of us had recalled. We were relieved with they explained that they had switched at the last moment to Edgar Alan Poe's The Black Cat. The most fun I had was dropping in on their Jane Austen dance lessons (yes, parents were invited). The teens who planned the conference watched Pride and Prejudice so carefully they learned the dances and were able to teach it to others. We practiced for an hour, headed back to the apartments, and dressed as best we could for the impromptu ball. Next June, I think I'll play hooky from being an adult and go to the Teen Conference instead! 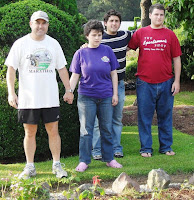 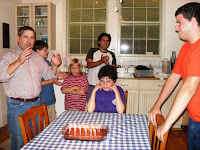 The six-week marching band camp that started in July allowed David to make friends before school started. He got to know the building and established a rapport with the band director, who ended up teaching one of David's elective classes (percussion). Because David adjusted well to the discipline of the band, push-ups and all, he developed a reputation for being a respectful student. Since the music they rehearsed did not include electric guitar parts, he enjoyed being able to create his own part. When he wasn't at band camp (five hours a day), he hung out with his cousin Jose, who stayed with us for two weeks before starting college. 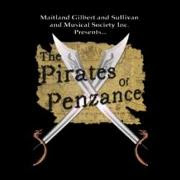 Tomorrow, I will wrap things up with the results of David's first semester in school away from home. For now, I will close with an anecdote about what we did on his between semester break. David had a chance to meet up with his ChildLight friends (who keep in touch on Facebook). One played one of the Major-General's daughters in a full-blown, stage production of The Pirates of Penzance. Except for one dearly-missed family from Oklahoma, we were all able to converge on Charlotte and, after the performance, we headed to the star of the show's home. I am not sure what time he went to bed but I know David had a blast getting caught up with his friends.

I have loved Gilbert and Sullivan ever since playing Peep-Bo in The Mikado, and Steve caught the bug after seeing the movie Topsy-Turvy. (He really couldn't help it for it's in his blood. His British grandmother and aunts used to sing in Gilbert and Sullivan productions before his mother left England and met Steve's father in Central America.) We attended a HMS Pinafore concert in which singers wore the costumes, but nothing was staged. The music was great, but it is not the same as seeing whole enchilada: dancing, acting, sets, props, etc. Even Pamela loved Penzance: she loved the pirates and thought the giggling girls (part of every Gilbert and Sullivan production) were hilarious. She laughed at one of the anachronistic gags--the pirates stealing valuables from the Major-General's home managed to cart off a laptop! Pamela loved the plot twist revolving around her favorite topic, leap year.