What Eggsactly Is RDI? Part II

Guided Participation Relationship (GPR) Yesterday, I promised to talk about a Guided Participation Relationship, the process parents study intensely in the first few months of RDI. The following video of Pamela and me opening the egg coloring kit illustrates it well. GPR is how parents help children gain new understanding and skills by working together. We frame and reframe our roles to challenge the child mildly and avoid overwhelming them. RDI helps parents figure out how to guide autistic children into following their lead without commands.

Keep in mind that the ease with which Pamela actively participates with few commands or prompts from me is the result of three years of work. Don't worry if your child can't do this right now! It's okay. Pamela couldn't do it either. 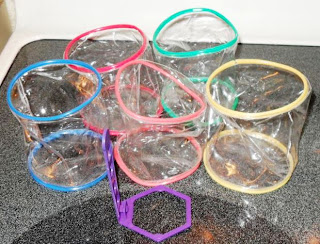 Productive Uncertainty We haven't colored eggs from a kit in ages for a variety of reasons (visiting family, having family visit, creating natural dyes, trying Ukrainian wax, etc). It's been at least six years! Pamela solved several problems, but only one was entirely new: collapsible egg cups. An interaction needs enough uncertainty to challenge without overwhelming her. Too much challenge leads to meltdown, which is unproductive. No uncertainty leaves no problem to solve (also unproductive). One element of GPR is knowing how challenging an activity is to your child and giving the right amount of support to create moments of productive uncertainty.

Active Roles Pamela relied on several strategies that infants master: she trusts me and stays in close contact. All good relationships build on trust! She monitors what I do and gets involved when she can. She pays attention to any instruction I give, whether it's verbal or nonverbal. We don't rely upon heavy-duty commands and prompts, which tends to make children passive: they are waiting for the next prompt. Since Pamela now has toddler-level strategies, I let her take an active role in figuring out the first step. I invited her to sit by moving her chair, and she did. I give her plenty of time to study the box. She confirmed with me our purpose, "Coloring." My first reply was too indirect, she asked again and I replied, "Yes, we're coloring." Wanting to know my perspective is one form of social referencing because I am her compass.

Interaction Patterns Pamela decided to open the box but referenced me first ("Open it"). She pulled the contents and I moved what we didn't need out of the way. I flipped over the bag with the collapsible egg cups curiously and left it alone. Again, I patiently waited for her to decide what to do with the bag. She referenced me before opening it. Another element of GPR is thinking about roles and interaction patterns. In this case, her role was to open the cups and add tablets to them. My role was to punch the perforated circles out of the box to make a drying stand. Basic interaction patterns are assembly line, turn-taking or reciprocating, and simultaneous. Our interaction pattern was doing different, but complimentary things, simultaneously, almost like toddlers do parallel play.

Horizontal Integration You may have noticed the wide variety of communication Pamela understands: gestures, head movement, facial expressions, sounds, and words. Infants become masters of nonverbal communication in the first eighteen months of life by splicing together the separate channels of information into meaning. Something as simple as a wink completely alters what we say. This foundation is horizontal integration, or broadband communication. Children learn to think with their eyes--a term coined by Michelle Garcia Winner whose blog is RDI-friendly, before focusing on higher-level thinking.

Vertical Integration Pamela has learned to monitor my actions for anything different and consider if it's worth taking her own action. When I opened up a collapsible cup and put it to my eye like a spyglass, she turned her full attention toward me until she realized I was being silly. Monitoring people, filtering out fluff, and filtering important information that needs careful thinking is called vertical integration. Children started doing this after they have mastered the basics of nonverbal communication.

Intersubjectivity When Pamela struggled to open the bag of tablets, I paused and she immediately looked up because I was doing something different (more vertical integration). We exchanged glances and nodded to each other agreeing that she needed scissors (more horizontal integration). I checked how closely Pamela matched the tablet to the color of the cup's rim and gave her indirect approval, "I guess that will work." She let me know she was finished by saying, "Good." We took on new roles: I became the reader and Pamela became the collector. I told her what we needed. At first, she disagreed about getting a measuring cup and said, "Without." After I reassured her, she looked in the wrong place. I let her search until she decided it was time to ask for help. I answered her by turning my gaze to that of the cabinet. When I explained the next step, "It says 5 ounces of" and she anticipated me, "Water." I paused dramatically and said, "WARM water." She replied, "It's warm," and headed to the sink. Pamela understands the importance of sharing her thought-life and values what I think, which is called intersubjectivity.

In GPR, adults use tools like productive uncertainty, active roles, and interaction patterns to help children integrate their brains by problem solving. Sometimes we do too much to protect our children from error (ahem, the science fair project too perfect to be the work of a student). The danger of doing too much for an autistic child is creating a world where nothing is out of place, and, with their exquisite eye for sameness, the child demands a more and more predictable world. Introducing unproductive uncertainty, slowly while helping the child calm down when slightly dysregulated, introduces novelty in a controlled setting. Assigning active roles guides them on the path of searching for meaning. Interaction patterns provide a same, but different framework for children to address new problems. When child learns a turn-taking pattern to toss dry clothes in a basket, later she can apply that to many other situations: putting rolled-up socks into a basket and later into a drawer, putting silverware into a drawer, building a tower of blocks, etc. Turn-taking builds the foundation for higher level skills like having a conversation and playing games.

We resist the temptation to create a perfect product (thereby doing too much to make it happen) by focusing on the process, not the end result. Actually, long-term, the hoped-for end result is to integrate the brain vertically and build executive function. During our interactions, I wonder, "Am I giving her enough time to observe, process, and think? Am I giving her enough novelty without flipping her out? Does she find her role important enough to search for meaning and feel good about her contribution? Are our roles and communication balanced so that neither of us are exerting too much control? Am I giving her opportunities to interpret both verbal and nonverbal information? Am I talking too much again? Is she really monitoring me or tuning me out?" Is your head spinning? Mine sure did when I first started learning the intricacies of GPR!

You will see in later clips that we drew on our eggs with crayons. Some of my eggs turned out quite psychedelic, failing to match my vision of loveliness. Pamela's eggs had mainly scribbling and a couple of pictures and words. I dropped one and cracked it, and so did Pamela. Our eggs were not worthy of Ukranian artistry. However, they were good enough for us and we both learned new ideas about coloring eggs.
Posted by walking at 13:33

Funny - we did the same egg coloring ;-)

Thanks for sharing! So many things we take for granted in communication - amazing to watch the steps in action.

It is true Kathleen. We take all this for granted, and it is amazing how this gets transmitted from parent to child through the generations and across diverse cultures in the world.

That is why studying GPR and doing it more deliberately with an autistic child is so helpful. It gives them a chance to learn in ways that their peers have learned. Not all can, but it is sure worth trying, even with an older person with autism.

Very true! It is helpful information for those with mild sensory issues, too, as it helps to 'declutter' the input that would be given to them.

Di, I still have two or three parts in my head: horizontal integration, vertical integration, and maybe one more, each with a video from our Easter egg coloring . . . Feel free to post . . .

Tammy, if you don't mind, I'm "borrowing" your words above to make a cheat sheet to have near me during our RDI taping sessions. I still get so nervous about taping that I tend to forget GPR and have it become about the product not the process. These reminder sentences will help me VERY much. Rhonda

Borrow away. I think I have two more to go. One on vertical integration and the other . . . not sure!