The Anatomy of a Meltdown Part II

We all know what meltdowns are, unfortunately. What can we do about them? 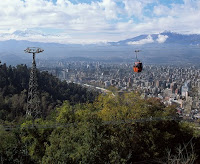 Back in 2006, the kids and I spent three weeks living in a high-rise apartment in Santiago, Chile while Steve worked on a computer project for his parent company. Pamela, a veteran traveler, had a blast riding the Metro, eating at different restaurants, sampling sorbet, walking in the beautiful parks along the river, touring museums, attending a rodeo, and riding a cable car to the top of Cristobal. Because she enjoys the adventure of exploring a new place, she adapted very well. We were very careful to space out our activities enough to give her downtime and suffered no meltdowns until the night we were supposed to leave. 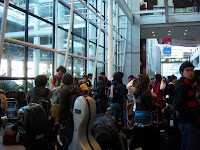 It happened at the airport. Because Steve was traveling on business, he took a different airline and his red-eye flight left an hour before ours. No problemo, right? Wrongo! We waited and waited and waited for about five hours before they finally told us the bad news. At two o'clock in the morning, the attendants announced the cancellation of our flight and began herding us to the hotel where they were putting us up. While Pamela didn't become completely unglued, she cried and cried loudly for about twenty minutes. David and I knew how difficult this was for her to process, so we weren't angry. It truly was understandable, especially because it was way past our early bird's bedtime.

Something else happened that put the whole thing into perspective. About two hours before the bad news hit, an ugly American had spent way too much time pounding the brewskies in the lounge. He showed up belligerent and behaving very badly. He completely lost control of himself and very quickly a crowd of twenty people surrounded him while someone called security. They hauled him out of there in a straight jacket. His outburst showed us that Pamela's little crying spell wasn't all that bad.

Moments like these are not fun, and families of children in the autism spectrum face them more often than most. We accepted them for what they were--extreme frustration--knowing that, if we learned from them, we might become better equipped to prevent them down the road. The more we know about Pamela and how she thinks, the better we are able to guide her through the challenges of life, whenever and wherever they may occur.

The key to handling meltdowns is preventing them in the first place. How? By putting out the flame before it hits the blasting cap. It is not as impossible as it sounds if you understand your child and what to expect at her level of development. When Pamela was under the age of six and highly volatile (imagine the stick of dynamite sweating nitroglycerin), I practiced the same skills that a child learning to cross the street uses: stop, look, and listen. When she was four, we were at Tulane Medical Center and Pamela had a meltdown. Although I avoided the elevator, she still freaked out when we reached the waiting area. I was puzzled because she had no problems during an earlier visit the previous winter. After she calmed down, I noticed an usual sound and asked the receptionist what it was. An air conditioner! I added low-toned rumbling to the list of noises that frightened Pamela.

The first step of prevention is to become aware of the triggers of meltdowns: physical, mental, and emotional issues that add to Pamela's level of stress. Being aware of potentially explosive situations gives you time to anticipate: think of a back-up plan or an alternate strategy, locate an escape route, remove her from the setting, calm her down to lower her level of stress before taking another step, etc. When Pamela was very little, we expected to leave events early if things proved too much for her. We looked for a quiet room where she could hang out before getting overwhelmed. If one of us had to stay, we came in two cars. I brought a bag of things to keep her preoccupied. We took the stairs instead of the elevator. Occasionally, she surprised us and stayed for the whole enchilada.

Understanding Pamela's sensory needs was my most effective tool. Every autistic child is different, but I learned early on that Pamela craved and loved vestibular stimulation. When she was four years old, I noticed she cried every time I tried to skip an aisle at the grocery store. I didn't let her box me into a routine or listen to her crying all the time by counting, "One, two, three! WEEEEEEE!" Then, I zipped past the aisle, pushing the shopping cart just fast enough to put a sparkle in her eye. Years later, when I enrolled her in a homeschooling co-operative class, I was her aide, looking out for signs of increasing stress. By reading her body language, I knew when she was growing more frustrated. Rather than wait for the explosion, I put out the flame by walking with her into the hall, spinning her until her body melted, giving her some deep pressure hugs, and getting her a drink of water. The first year she needed that about once an hour to last through a five-hour day once a week. After three years, Pamela could handle the whole day without any sensory breaks.

Sometimes, previewing a situation in advance helps. When Pamela was four-years old, we flew to Germany to visit my parents. She threw a major fit walking through the jetway to board the plane. Once aboard, she calmed down immediately. Getting off the plane, I noticed that the sound of the engines echoing down the hall had bothered her. Five years later, we were planning a trip to see Steve's sisters in El Salvador. Between two rounds of Auditory Integration Training, her own maturity, and our improved ability to guide her, we weren't sure how she would react. Two months before our trip, we had to pick up my mother from the airport. In that pre-911 world, we got permission to walk in a jetway with Pamela for a dry run. She had absolutely no problem, and I was so relieved.

Sometimes, no matter what you do as a parent, no matter how capable you are, there is nothing you can do to prevent a meltdown. Sometimes, the burden is too much for our highly sensitive children. It helps to know what to do when your child has totally lost it.


I know. People are staring. They think you are the worst parent in the world.

They are in the dark and are completely ignorant about what you and your child face every day. If they had to walk a mile in your combat boots, they would wilt under the pressure. They really don't know much as they think they know.

I have been there. We were new to a church right after we put Pamela on the gluten-free, casein-free diet. She was six-and-a-half years old. Steve was traveling on business that weekend, so I had the kids with me. We arrived early, so I could practice with the choir, which sang in the front of the church. I had arranged for a friend to watch the kids for me, but she was late. Fifteen minutes before the service, we quickly rehearsed two songs. The choir director turned on the microphone to the new sound system and Pamela went berserk. She began doing the Indy 500 around the altar. The people who came early to pray before the service were appalled at her behavior.

I stopped, looked, and listened. The only thing that was different was the sound system. Turning it on triggered the meltdown. I became mindful of what I could control. I asked the director to turn off the microphone; then I grabbed Pamela. Since I had already lost my chance to win the mother of the year award in that church, I did the unthinkable. I sat down on the steps of the altar, took Pamela in my lap, and rocked her until she could stand up and walk out of there with a little bit of dignity.

I know I must have looked like some crazy hippie mom. I didn't care.

Pamela was growing bigger every day. Her autism wasn't going away. By then, we had decided to avoid hauling her out of ugly situations. Some day she would be stronger than us, and we wanted to teach her to do two things: (1) recognize when she was getting frustrated and take steps to avoid a meltdown and (2) calm down quickly and walk out on her own two feet. Fourteen years later, Pamela has accomplished both goals.
Posted by walking at 16:35

Email ThisBlogThis!Share to TwitterShare to FacebookShare to Pinterest
Labels: anxiety

I especially love the story about what you did at church that morning.

Your last paragraph is our goal as well with meltdowns... self-awareness, and knowing what works for you to calm yourself down enough to get out of the situation. Austin has achieved that. He was probably 12. We're just starting to work on that with Reece now at 8, and I hope that she will be able to come along quickly. Her meltdowns are really the main thing that hinders her in group situations. She interacts beautifully, it's just when she misinterprets someone's intentions that we have a problem.

I am always inspired when I read your blog. I wish families with autism all could see see it the way you do. I have directed my mom's neighbor to your blog in the past. I hope she reads.......

'It is not as impossible as it sounds if you understand your child and what to expect at her level of development'...so true!
You put the meltdown into words as good as anyone I've heard! We have physical reminders of meltdowns of times past in our house...how I thank God for better days and less frequent meltdowns!
Glad you shared...as always!

If this resonates with all of you veterans, then I know it will help families who are just starting their journey with autism. Thanks!

Tammie - I loved this post! We travel a lot and airports bring out the worst in everyone, particularly kids with ASD. I'm so glad to know I'm not alone with the strange things I do in airports to help make travel easier for our family. Thanks for sharing!