Do Caterpillars Have Antennae?

When we were in Boiling Springs, I had to sneak off to an outlet mall because David, who is quickly approaching Goliath-size, had outgrown yet another pair of running shoes. While there, we checked out an education supply store, chock full of twaddle, completely devoid of living books. Since I figured we wouldn't escape without buying something, I decided to be proactive and lure Pamela with a butterfly hatchery kit. It worked!

After we got home from the conference, I ordered the coupon for live caterpillars that came with the kit (costing three dollars for shipping and handling). As promised, a box containing a sterilized food cup in which four painted lady caterpillars lived arrived. (You can order the caterpillars without the hatchery too.) Because it is so stinking hot right now (my pink ball cap which no male in my household dare touch had salt rings from my hour-long walk this morning), they arrived completely grown. We missed the molting cycles leading up to the final one unfortunately. 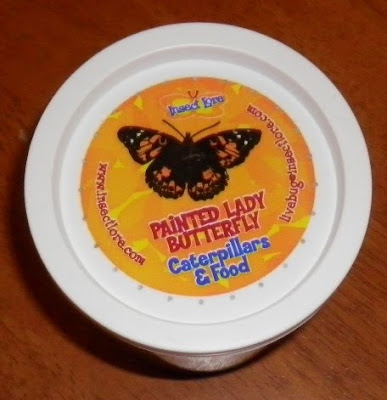 Day One:
Many education theories assume that children are little bags into which you pour knowledge. If you clothe the facts with enough entertainment and fun, children will learn everything that must be known for the test. Of course, that kind of learning is usually short-term and doesn't ever make it to long-term memory. Charlotte Mason and RDI both focus on the process of making discoveries and observing carefully, not the product. In the first video of our day one observation, I go at a slow pace and guide Pamela into making discoveries. In talking about what we saw, Pamela made several discoveries: how many caterpillars we have, how long the caterpillars are, what the brown stuff was, what was wrong with Eric Carle's caterpillar, and what is special about the lid. I let Pamela initiate how to do the drawing and I didn't start drawing until she was well into her picture. We left many questions unanswered, but, as my ultimate hope is to hatch eggs and watch the life cycle from the beginning, I think we will eventually figure it out together. After we wrote our observations, we talked about what we might expect the next day. And, boy, were we wrong! 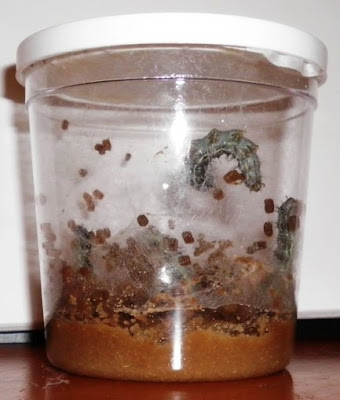 Day Two:
On the second day, Pamela focused on coloring first. I guided her to study the caterpillars first because something was different today. All four caterpillars had moved to the lid and one was already hanging upside down in its characteristic J formation. At first Pamela didn't observe carefully, but once she did, she quickly concluded they were making cocoons. I didn't correct the word because I knew it would stick with her better by mentioning it while doing our nature notebooks. Then, we colored yesterday's drawing and, by the time we finished, another caterpillar hung itself upside down. We wrote our narrations and, at that point, I taught Pamela a new vocabulary word, chrysalis. Because of her aphasia, I limit flooding her with a bunch of words and deliberately chose to introduce only one word at a time. 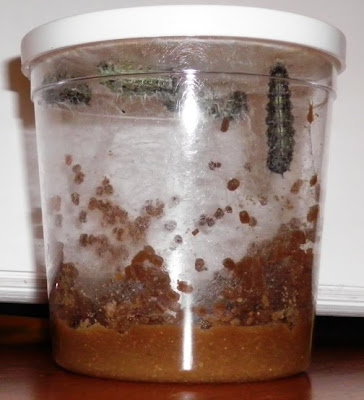 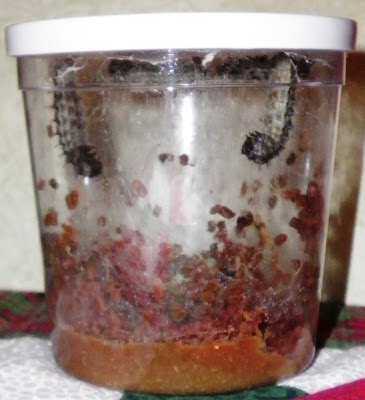 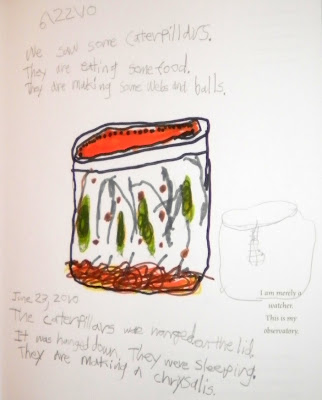 Great idea! I love the interaction this has. I will pass this idea on to my daughter.

That looks fantastic. I would really like to find something similar over here for Annie to do, it looks like so much fun.

Kathleen, the focus on process instead of product (knowing stuff) is what many of our kids need and we don't do enough off. Rapid-fire, force-feeding of facts only overwhelms them and gives them a feeling of incompetence.

Marita, and I have more to come. I had a really cool moment yesterday and can't wait to blog it! But, life is getting in the way . . .

So very true! Passing on the information to others, too!