For the past five years, I have connected with kindred spirits at the Charlotte Mason Conference headed by ChildLightUSA. Last year David joined me and had a blast making friends at the Teen Conference. Pamela must have felt left out because she asked to make it a trio this year. As she isn't autonomous and can't keep the hectic pace of the teens, she hung out with me.

We arrived Tuesday night for dinner with the Smiths, caught up with old friends, made new ones, and listened to music. I spent most of Wednesday in meetings, so Pamela and David hung out at the apartment until dinner, when the conference actually began. Because of Pamela's greater need for downtime, I embraced the idea that "slow is the new fast" and carefully selected what we attended together. I made every plenary session that I really wanted to attend. When I wasn't presenting, we picked Pamela-friendly workshops on crafting and sci-fi movies.

Pamela even had opportunities to practice our current RDI objective (appraising whether someone is available to speak and waiting if they are not). Leading up to the conference, I explained that I would be doing presentations and how I wouldn't be available to talk then. I even brought my laptop and let her play on it to keep her happy. I know, not very Charlotte-Mason-like to encourage your kid to have two straight hours of screen time. That's the real world.

For my first presentation on mathematics, I got turned around trying to find the stairs to the third floor of a building in which I had never been, only to find that (a) the name and password I needed to log-in to the computer didn't work, (b) the room was eighty degrees, and (c) it would only get hotter as the morning progressed. Then, I learned that someone from the math department at Gardner-Webb was at my talk (gulp) while I hoped and prayed Pamela would kindly let me finish without asking if Julius Caesar drove a car or a chariot.

God answered that prayer! Pamela was a doll. I made it through the three issues I wanted to address on Charlotte Mason's thinking about mathematics. I think the mathphobes sensed the awe and wonder of the Fibonacci series, which pops up in the most surprising places. A couple of people had "aha!" moments, and we even had time for questions.

Friday night was the highlight. After a full day, I dropped Pamela off at the apartment with David for some downtime. I facilitated the special needs processing session with a headache and, after we finished, I made it back to the apartment with a blistering headache. I laid on the couch to rest, only the hear Pamela pester me with her request to stay put for a long, dull evening rather than explore Broad River Greenway. All head-pounding aside, I truly wanted to relax with friends in a beautiful setting, but my head hurt too much to argue. I resigned myself to my fate and told Pamela I was disappointed, but that I understood she was tired.

After a good nap, I sat up and munched on some pretzels. Pamela asked, "Where are we going?" I didn't know. Then she announced, "The park!" I smiled and grabbed her hands and kissed them in gratitude. Then, I did the Snoopy dance around the apartment while Pamela smiled in amazement at how easily she could amuse her mother.

We arrived at the park to see two displays by an astronomer with cool-looking models and pictures of the stars and a collector of bugs who had all kinds of creepy crawlers on display. Pamela was not at all afraid of the tarantula crawling up his arm. We started walking down the path and Pamela loved being in the woods. "It's a forest," she said.

We stopped at the cabin where musicians, including our very own Janet Pressley blew us away with her gift for the blues. Pamela said the cabin reminded her of Little House in the Big Woods and asked if it had electricity. She went inside to explore while I chatted with friends for a little while. Pamela got bored, so we continued down the trail.

She said, "Just like The Children of the New Forest."

"I loved that book!"

I added, "The kids were all alone."

We arrived at an overlook with a splendid view of the river. I wanted to take a picture of Pamela. She refused, saying, "No electricity." I realized that using a camera might spoil her imaginative mood, so I suggested that I was a time traveler from the future and wished to take a picture of the river to show my friends. Pamela was cool with that, so I snapped these shots. 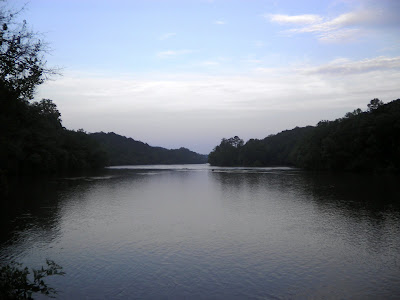 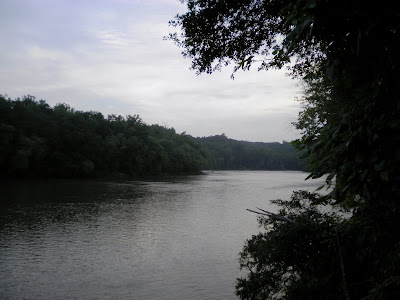 Pamela wanted to head back so she said, "Let's go to the man village!" a la The Jungle Book. I suggested animals we might see on the way, like panthers, bears, and pythons, and she laughed. We spent a few more minutes hanging out with friends near the cabin and then Pamela spotted the wooden playground and explored that too. 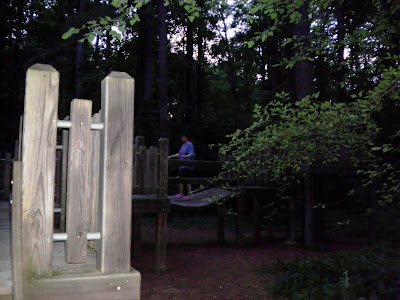 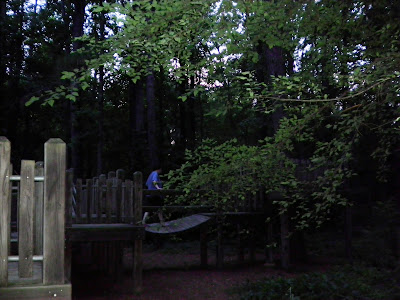 We drove back to the apartment and, along the way, I treasured and pondered that lovely night. If I had forced her to come, would her mood have been as sweet and magical?
Posted by walking at 10:28

ahhh, 'sweet and magical' what a treasure indeed!

i KNEW i saw your pic when I was browsing through the conference material online! ;)

Oh! A literary walk through the woods - I really enjoyed rambling along with you!

It was all sweet, from the delivery of your presentation to the magical moments in the park. I'll bet you already know the answer to your last question.

It was wonderful to see you and Pamela a the conference. A literary walk..........perfect!I was at the used book store!

I love how you describe how she communicates.