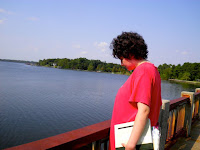 Sometimes, we do nature study outdoors and sometimes indoors. Sometimes, we plan things and sometimes we wait to see what happens. Last week, Pamela and I took a walk at an old bridge over a lake not far from our house while David went for a run. I had no idea what we might find and was delighted when we came across a large patch of passion flowers (Passiflora incarnata). I have always hoped to find some growing in the wild because they are such fascinating flowers. Yesterday, on our daily walk, Pamela asked, "Is it a rabbit?" I glanced over at what my peripheral vision told me was a squirrel and then I did a double-take. "No, it's a squirrel without a tail!" We both laughed and Pamela said, "A tailless squirrel." I quipped back, "I wonder if it got into Mr. MacGregor's garden?" 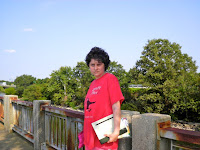 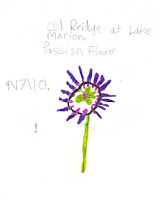 For the past week, we have also done some indoor nature study with a kit of live ladybugs. I checked out the Outdoor Hour Challenge for Ladybugs, have not been able to find any aphids nor wild ladybugs in the yard, and plan to keep my eyes peeled as autumn progresses. 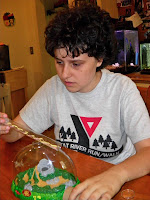 The day we received our pink spotted ladybug larvae (Coleomegilla maculata) in the mail was pretty hilarious. I was disappointed because we only received three larvae (we were promised fifteen). Pamela was even more disappointed. She was expecting sweet little ladybugs and all she saw were these ugly-looking miniature alligator bugs. I reminded her of what came in the mail for her butterfly kit and then she realized these were not adult ladybugs.

As we do with every nature study, I consulted the Comstock book and leafed through pages 364-366 (Lesson 89) for ideas. I made two sheets for her to record her observations of the larvae and the adults. As the life cycle of the ladybug progressed, Pamela made entries in her nature notebook. One ladybug larva died after we put it in the kit, but the other two lived to be adults. When the first larva pupated, Pamela thought it was just sleeping. The larva had not moved for a day, so I gently asked what had happened to the caterpillars. She made the connection to chrysalis, and I told her the proper word was pupa. Then, she made her notebook entry. 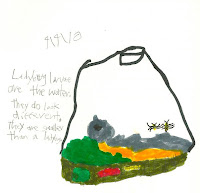 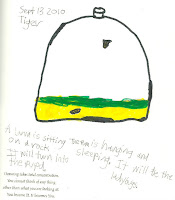 We got lucky the day the first ladybug emerged from its pupa case. We had just finished reading right before lunch. We glanced up at the ladybug container, just in time to see a ladybug half the way out. We were disappointed again! It was yellow and had no spots. At that point, Pamela really felt ripped off! During the next hour, we watched the ladybug slowly turn pink (Pamela thought it looked orange) and gained its spots. Today, she made her final journal entries and observations and then set them free! 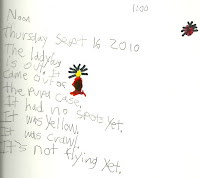 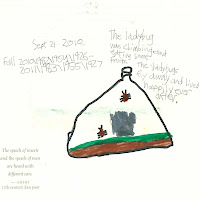 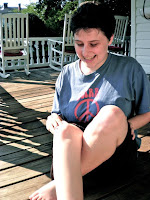 Your house is on fire.

And your children all gone. 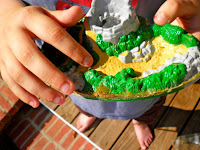 The first ladybug reacted according to plan. It crawled on Pamela's leg and flew off! The second one refused to come out of its home. We finally had to unscrew Ladybug Land and took it apart. Pamela yelled, "Come on! Fly away! You lazy ladybug!" Finally, we watched it crawl down the brick steps. 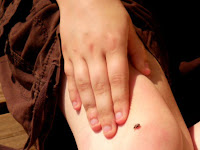 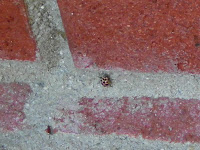 Sheets Based on the Comstock Book 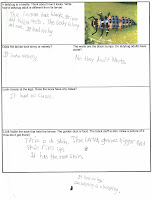 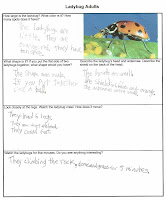 Pamela's drawings are just fantastic and the interactive conversation is amazing. You have done so well with her.

Great Blog! New blog on the Hx. of the Ladybug:
http://historyoftheladybug.blogspot.com/

It is so nice to see an entry from your family this week! I always love how your daughter makes her journal entries and her careful words and drawings. Ladybug larvae are interesting and I have not seen as many as usual lately. We have lots of aphids but no ladybugs. :(

Thank you for sharing your link and your wonderful entry.

I love this post.
I love to see ladybugs. They are considered to be good luck.

I found a dead ladybug of a different species on our porch. So, there must be some wild ones nearby! I wonder if dead ladybugs mean good luck . . . :-)