Flipping the Bird and other Thanksgiving Memories

I woke up at stupid o'clock this morning (3:45) and, after a quick shower, was in the car, eyes barely open. We drove by Wal-Mart in our small town with a population just under four thousand. THE PARKING LOT WAS FULL! We did not turn into the parking lot, however, for there is no way you would ever find me shopping on a day like today. I would rather buy less for Christmas than be caught in a cat fight over Tickle Me Elmo du anno.

The last time I stepped foot in a mall on Black Friday was about four years ago. My glasses broke on Thanksgiving Day, and no amount of duct tape enabled me to wear them. I am legally blind sans specs and the two opticians in our town were closed. Steve chauffeured me to the nearest mall, forty minutes away. Like a SEAL team, I headed straight toward the target, accomplished the mission, and got out of there as fast as I could with no collateral damage.

According to Consumer Reports, nearly 14 million Americans are still paying off credit-card debt from the 2009 holidays. This may sound harsh, but it would be far better to invest in relationships rather than rack up more debt. The Christmas my parents went bankrupt, presents were sparse. Mom turned cheap outdoor carpet samples and rainbow variegated yarn into booties to warm our feet during a brutal winter in Chicago. She recycled everything! My youngest sister outgrew a red coat made of furry material, and, with her magic needle, my mother whipped it into a big red dog. The only store-bought toy for me that year was a jigsaw puzzle from my grandmother in Germany. Since we had so few gifts, one person played Santa and passed presents out, one at a time, so everyone could watch someone unwrap their present and savor the anticipation.

Going to school and swapping Christmas stories was easier than you think. I would tell kids that the elves came and decorated our tree (a German tradition) and we ate chocolate candy from Germany! We sang Christmas carols around the advent wreath and Dad read the Christmas story. Each one of us had to give a gift to the Christ child (saying a poem, playing a song, etc.), and hang a special ornament on the tree. The time we spent together outshone the presents.

Where was I going at such an insane hour? Schlepping Steve off to the airport!

Yesterday, we had a lovely Thanksgiving (scroll down for recipes) unlike the horror story from 2001. That year, we moved to the Shumagin Islands in Alaska. We lived in a house with no fancy indoor heating system. The primary source was a wood stove. We combed the beach for driftwood, chopped it up, and supplemented with Duralogs. Yes, the island has no trees. The other source of heat for cooking and heating the hot water tank and house was an oil stove with a cracked kiln. Anytime we kicked the oven above 350 degrees, the stove spewed soot everywhere and the kids ran around the house looking like little chimney sweeps. You know you are in trouble when your kitchen stove has a big thick pipe running up to the roof! Undaunted, we put on our typical Thanksgiving feast and, after checking the bird an hour into cooking, realized that the top was browning nicely and the bottom was a tad raw. We spent the next twelve hours flipping the bird. We weren't totally deranged and popped a plate of turkey into the microwave, just to be safe. 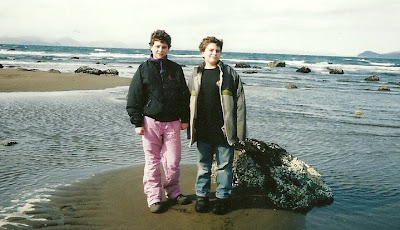 Last year, I blogged a nature study we did on a butternut squash as we could not find any pumpkins. The post from 2008 includes a picture of an oil stove in case you think I exaggerate and 2007 featured a paper turkey Pamela made. Back in 2006, I blogged recipes for our gluten-free, casein-free thanksgiving. Every year we learn a new trick so this year this old dog will include a new crop of recipes.

Biscuits - Pamela has not eaten biscuits since she sneaked one dropped by her cousin Daniel at a family reunion back in 1996. The next day, as predicted, she developed a rash, hosted several meltdowns, and left a yellow puddle on the floor while watching television. This year's miracle is brought to you by gluten-free, casein-free Bisquick. The only problem I see with this product is that the box is too small! That big pile of drop biscuits between David and I tasted quite delicious, especially piping hot. They are a tad dry a day later, so I plan to rummage online for a meatball recipe in which to recycle them. I got the recipe from the back of the box:
2 cups Bisquick
1/3 cup shortening
2/3 cup Silk PureAlmond Unsweetened milk
3 eggs

Sweet Potato Casserole with Marshmallows - Steve did a fantastic job with this recipe which required very few alterations. We substituted Earth Balance butter and made sure the vanilla and miniature marshmallows were safe. He used brown sugar instead of white sugar because it just tastes yummier. We skipped the suggestions for scalded milk and cinnamon sugar (as if the marshmallows don't make it sweet enough). He made a layer of sweet potato mixture followed by marshmallows and another layer of each.

Pumpkin Pie - The first thing we made last summer when Betty Crocker's miracle arrived, we made Impossibly Easy Pumpkin Pie and it tasted impossibly fantastic. We used the following substitutions and made sure the vanilla was safe: gluten-free Bisquick, coconut milk, and Earth Balance butter. I wanted a traditional crust for Thanksgiving since David's braces ruled out pecan crust. I adapted the crust (and only the crust) from this recipe for Cream Cheese Pumpkin Pie for my 9.5 inch glass pie dish with fluted edges. The unsweetened almond milk gave the crust the nutty flavor we love. I made the pie as directed with these ingredient portions:
1 1/2 cups Bisquick
8 tablespoons Earth Balance butter
6 tablespoons Silk PureAlmond Unsweetened milk

Cornbread for the Stuffing - Steve, who prefers white-bread stuffing, made a cornbread stuffing that he didn't enjoy. Next year, I'm thinking about trying a slow cooker cornbread stuffing recommended by my friend Queen Mum over at Setting of Silver. It definitely solves the problem of running out of 9x13 dishes and limited oven space at the critical moment. I tried a new recipe by adapting one from The Little House Cookbook. Because we could not add pecans to our stuff, I substituted unsweetened almond milk for the buttermilk. As much as Steve hated the stuffing, he said the cornbread was phenomenal, the best he's ever had in the annals of gf/cf cookery. I doubled the Crackling Cornbread recipe minus the crackling to fit a 9x13 dish:
1/2 cup Earth Balance butter
2 cups stoneground yellow cornmeal
2 teaspoons salt
2 teaspoons baking soda
3 cups Silk PureAlmond Unsweetened milk
4 eggs

Preheat oven to 425. Melt butter by heating it briefly in the baking pan. In a larger bowl mix cornmeal, salt, and baking soda. Stir in almond milk. Beat eggs well and add them to batter. Stir in the melted butter last. Pour batter into hot greased pan and bake about 30 minutes, until the brown edges pull away from pan and the center of the bread bounces back when pressed.

As always, I made cranberry conserve, which we serve on the turkey, eliminating the need for gravy. We also served turkey, brussels sprouts, green beans, and macaroni and cheese that was the yummiest thing to cross my lips in ages and full of gluten and casein.

Pamela's cousin Jose drove all the way from Charlotte for dinner even though he heard Steve and I were cooking! Brave soul! 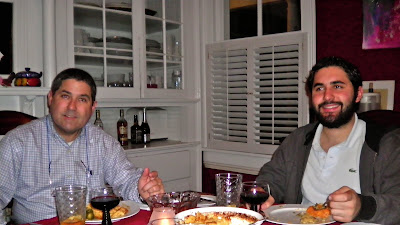 Thanks for sharing. I love knowing that we aren't the only ones doing this crazy diet and making it work!

You have had some incredible adventures! What were you doing on an island in Alaska?

I am glad your family had a nice thanksgiving.

I love that elves come and decorate your tree :)