The Last Day of the Week... Monday!

We finished our first week of school yesterday. Yes, I know it was Monday. Since we started school on Tuesday due to Labor Day, our first week of school ended on the first day of the week. Years ago, I figured out the hard way that one cannot squash five days of school into four without losing one's mind! I learned so many neat things about Pamela thinks this week because we worked at a reasonable pace.

History - As always, she likes to tell me the day of the week if given the exact date (a savant ability). While most of our books are set in the industrial age, a Mason education doesn't mean unit studies, so we have books from different times in history. Keeping a timeline or book of centuries helps children sort out the chronology. We received a beautiful book of centuries, and Pamela will soon start making entries in it. All five days of school, she selected the order of reading based on chronology. The first three days of the week she went forward in history, from B.C. to A.D. The last two days, she reversed the order. She wasn't clear about the dating of a literature book, so she checked the copyright page. She asked "What year?" right before we read the book on Mississippi sharecroppers. Later, I looked up a couple of background details for her and informed her that it was set in the early 20th century. I read in a history paper on Mason's work that being able to place events in time sequence is a high school level skill!

Language Arts - Pamela started learning a new poem for recitation: Fog by Carl Sandburg. She did a lot of copywork, which she finds easy; the topic is a bit odd: Benjamin Franklin's advice on marriage. I had her try two studied dictations at a higher level of difficulty: study a whole paragraph, but only write the sentence that I choose and dictate. She adjusted well to the latest wrinkle. I was most intrigued by her selections for a commonplace book (the pages with pink lines) which she began for the first time this year. I scaffolded by paying attention to her reactions while reading and, at the end of the day, asking her for her favorite book. A commonplace book, a memento for the student, gives a glimpse into the literary development of their thinking. Clearly, Pamela favored Caesar in her quotes, choosing passages from a poem, a character study, and a play. She found humor in the wild party at the White House but turned around and quoted Jesus the next day. What tickles me the most is that Pamela quoted Shakespeare for one of her entries. Shakespeare! 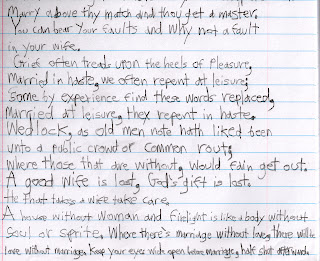 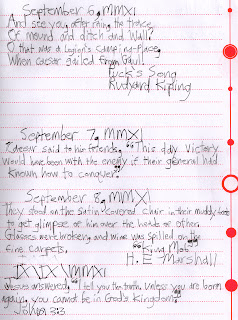 Not only that, I see her processing it during the day. Yesterday, she read about the Ice Age in her ancient history book. That night, Pamela found Antarctica in Google maps and was looking at the street view to see pictures. She asked me what season it was, and I told her that it was always like that. She said, "It never melts. Cold and miserable." I can tell one thing about the dating of the world confuses her. She has noticed that some books talk about millions of years (old earth ideas) and other books talk about thousands of years (young earth ideas). Today, when she was looking through the atlas, which has a graphic on prehistoric ages, she was trying to pronounce triceratops and told her the number of years. I explained to her that people have different ideas about when the earth came into being.

Literature - During the day, we read passages from seventeen different books of wide and varied genre:  historical, scientific, historical fiction, poetry, Shakespeare (yes, the real deal, unabridged and unadulterated), mythology, fantasy, biography, and the Bible. Avoiding textbooks gives us the freedom to read many lovely books during the day. The most beautiful thing is how integrated her learning becomes. While we are not reading a book on government right now, the two on inventions addressed the role of the President and Congress in building large pieces of infrastructure. Tongue-in-cheek realistic fiction illustrates politics. Not only that, ideas begin to emerge. This week, the overarching idea was how the North and South didn't agree on much during the Industrial Revolution.

Pamela shows much more emotion while reading than she did last year. Going through a passage about an inventor, Pamela gasped because the name of a street where he lived was West Newton Street. We used to live in a town called West Newton, and Pamela still drives through it on Google maps for old times sake. She also laughs out loud at things that strike her fancy and even shares little comments as we go.

Science (or Is It Art?) - We explored several things for science this week. Pamela painted cloud formations in water color to give her a chance to observe clouds and make their names more meaningful. We set up a simple experiment on evaporation that is ongoing. Like education, science cannot be rushed. Pamela filled the jars to the lid lines, and I  waited all weekend for the water level in the lidless one to drop below the confusing lines. Yesterday, they were not low enough. Hopefully, she can make her final entry later this week. We also shredded cardboard, newspaper, paper bags, and empty toilet paper and paper towel rolls for the worm composting bin. She made several nature notebook entries. The egg sac and feathers will be ongoing as we will make more observations down the road (on our walk, we found two other feathers that look completely different). We followed up on wisteria and camellia from last year. Pamela was surprised to learn that wisteria pods are green in the fall (not brown) and camellia fruit are fuzzy. We read several living books on inventions from the industrial era and a chapter about how related species share diseases. 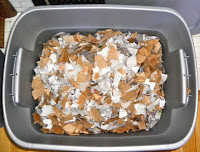 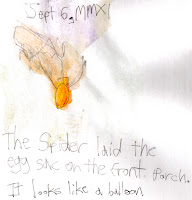 Physical Exercise (or Is it Architecture? or Geography? or Math?) - Every day of school, we walk for thirty minutes. Along the way, I snap photographs of details we read about in art and architecture last year. To refresh her mind on them, Pamela is recording them in her drawing notebook after we get home. We also talk about which compass direction we are heading for geography. When Pamela asks how many minutes have elapsed, I tell her the time and when we started for mental math. If she wants to know the number of minutes left, I tell her to subtract it from 30 or give her the stop time and current time.

Many interesting things happen on our walks. Yesterday, we bumped into a family from our Charlotte Mason study group. The father owns a tree service business, and we noticed the load of tree debris in the back of the truck and watched the little bulldozer move up the ramp. Last week, Pamela aimed to walk to the old Walmart but an evil blister felled her along the way. She took off her shoes and walked the  neighborhood sidewalks barefoot, where she destroyed a small spider web with her toes, found a mockingbird feather, saw an expired mourning dove, and discovered a date on a water pipe cover patented on October 22, 1912--a Tuesday according to her. Google it. She's usually right. 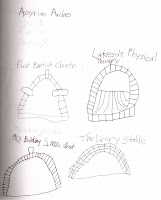 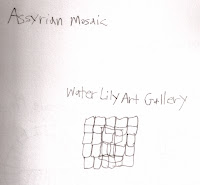 Geography - Many of our books come from different places as well as times. One story is set in New Hampshire but takes readers back to ancient Greece. Through our reading, we have visited Charleston, SC, Mississippi, New York City, Boston, Washington, D.C., New York City, Boston, the Missouri River, Michigan, California, Canada, England, Africa, South America, ancient Israel, ancient Rome, and an imaginary planet in a galaxy far, far away.

Math - Pamela loves the math curriculum, but the vocabulary is intense. I created some concrete illustrations with word roots and charts to help Pamela learn them. We combined review and new material this week. Her strength (pattern-recognition) balances out her weakness (language). Math is her strongest area, and she continues to work on pre-algebra.

Foreign Language - With Steve in Kansas, we transitioned to a canned Spanish curriculum that focuses exclusively on audio and pictures for the first ten lessons (which may take us all year). Pamela and I learned some new words: la carne, el medico, and el avion. All the other words were review for us! We are also listening to two familiar fairy tales in Spanish.

Music - We sang a folk song from South Carolina, a hymn, and a Latin American nursery song. We also listened to some of Bach's harpsichord music, which soothed us after a hot walk.

Handwork - Pamela ought to be fingerknitting this term to pave the way for knitting with real needles in the next term. Since her knitting needle case is nearly finished, she has focused on sewing instead.

Email ThisBlogThis!Share to TwitterShare to FacebookShare to Pinterest
Labels: science of relations

I love this post. She really is becoming quite the artist and very observant. :)

This is all so amazing Tammy! Love your "day in the school life of Pamela" posts!

I tagged you for the homeschool meme.
http://sageparnassus.blogspot.com/2011/09/of-memes-and-things.html

Ah ... the ubiquitous problem of dividing real learning tidily into subjects. :-) What a fabulous learning journal! And as I've mentioned before I love Pamela's artwork. Those cloud formations are very beautiful.

Pamela is turning into an artist with an eye for color. Steph, you would be shocked at how easy the clouds are to make. Maybe, I should blog it. :-)

Nancy, I'm on it! :-) Thanks about Pamela. Some days require lots of patience, but it's worth it!