The Power of Ideas

Every educational philosophy seems to have some sort of emphasis around which curriculum is built. For example, unit studies intentionally build all subjects around a theme: a specific topic, a character trait, a country, etc. Traditional textbooks focus narrowly on a subject with information organized and presented very tightly, factually, rigorously. Classical education gives children what fits in each stage (in the grammar stage, i.e., elementary age, the focus is memorization of facts, rules, data, details, etc.). Unschoolers pay attention to the interests of the child and provides what is needed to pursue those interests. So, what is the emphasis for a Charlotte Mason approach?

CM homeschoolers tend to think in broad principles rather than fixed rules. When unsure of what to do, I often fall back on her principles. For example, when Pamela was struggling with picture study taught in the manner Mason described, I realized Pamela, as a person with aphasia and autism (personhood being Mason's first principle), required more scaffolding by giving her visual cues to show what I understood, having a grand conversation, and turning it into a theory of mind game with five levels of scaffolding. Now, Pamela can do picture study in the way Mason described.

Some may point to history as the pivot of a Mason curriculum, which actually takes a backseat to the knowledge of God. "The knowledge of God ranks first in importance, is indispensable, and most happy-making" (Page 158) and "Next in order to religious knowledge, history is the pivot upon which our curriculum turns" (Page 273). While that may help us structure the books and things we choose, I think there is something more fundamental. While some subjects dovetail well into a chronological way of thinking (history, literature, picture study, composer study, architecture), others do not (second language, mathematics, science, handicrafts). Mason also added books completely out of the chronology she laid out for that school year! Why? I think the reason why has something to do with what we emphasize.

And, what do we emphasize you ask? Ideas. Mason touches on ideas in several of her many principles:


In saying that "education is a life," the need of intellectual and moral as well as of physical sustenance is implied. The mind feeds on ideas, and therefore children should have a generous curriculum.

We hold that the child's mind is no mere sac to hold ideas; but is rather, if the figure may be allowed, a spiritual organism, with an appetite for all knowledge. This is its proper diet, with which it is prepared to deal; and which it can digest and assimilate as the body does foodstuffs.

Such a doctrine as e.g. the Herbartian, that the mind is a receptacle, lays the stress of education (the preparation of knowledge in enticing morsels duly ordered) upon the teacher. Children taught on this principle are in danger of receiving much teaching with little knowledge; and the teacher's axiom is, "what a child learns matters less than how he learns it."

But we, believing that the normal child has powers of mind which fit him to deal with all knowledge proper to him, give him a full and generous curriculum; taking care only that all knowledge offered him is vital, that is, that facts are not presented without their informing ideas. Out of this conception comes our principle that,––

Therefore, children should be taught, as they become mature enough to understand such teaching, that the chief responsibility which rests on them as persons is the acceptance or rejection of ideas. To help them in this choice we give them principles of conduct, and a wide range of the knowledge fitted to them. These principles should save children from some of the loose thinking and heedless action which cause most of us to live at a lower level than we need.

The concept of ideas seemed very nebulous to me for a very long time, but the longer I work with Pamela, the more vivid it becomes. For example, last year, we read a book that absolutely captivated Pamela: The Tarantula in My Purse. Pamela fell in love with the idea of Jean Craighead George taking wild animals into her home, caring for them, and later releasing them. Then, we had an appointment from God the week we read the last chapter in the book: we helped a friend rescue two hawks! Since then, Pamela has talked off and on about rescuing animals. Last month, a praying mantis ended up in our house: I noticed it crawling on the ceiling while I was talking to a friend on the phone. A few days later, I snapped a picture of it hanging out on some furniture. All on her own initiative, Pamela dug out a mason jar and lid from the cabinet, carefully captured the misguided insect, and put it outside. I had my camera handy and caught her comments on video. 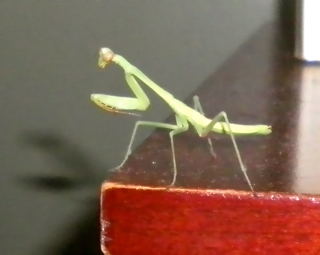 The most recent episode was concerning a walnut sphinx moth, whose identity Butterflies and Moths of North America kindly confirmed for us. (Oh, and as a result of our citizen science efforts, BMNA has added the walnut sphinx moth to the rolls for our county!) I have to admit: it wasn't a true rescue. I spied it on the back porch while setting the house alarm for the night. I found Pamela's butterfly garden netting and sneaked out to capture the poor thing, which we kept in captivity long enough to work through a few lessons from the Comstock book (Handbook of Nature Study) and make nature notebook entries. Tuesday night, we released the moth and Pamela easily saw why the moth is sometimes mistaken for hummingbirds. Its wings flutter quite rapidly. 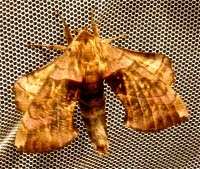 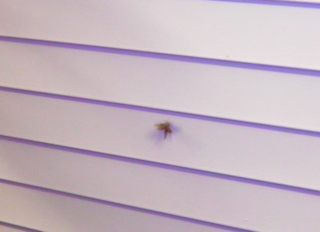 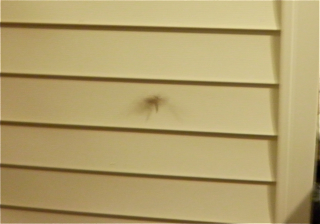 But, this is not the end to the ideas. More are sprouting. We cannot do nature study on every animal such as those not native to our area or close enough to visit. So, our books inform us when real living things cannot. We are now reading a book about people moving to a location where a species of endangered animals lives and monitoring their health and well-being. These people became veterinarians and animal epidemiologists and moved to a jungle or forest in a far away just to work in this field. She is picking up all sorts of interesting ideas related to the original one that captured her attention: we can give diseases to animals, and they can give diseases to us. Sometimes, our diseases kill animals and vice versa. Rather than take them to a hospital like we did the hawks, these animal doctors work outdoors and shoot medicine and sleeping potions into dangerous animals that need treatment. I cannot wait to see where these newly sprouted ideas lead Pamela.

I will leave you with her final nature notebook entries of what she learned from our guest. 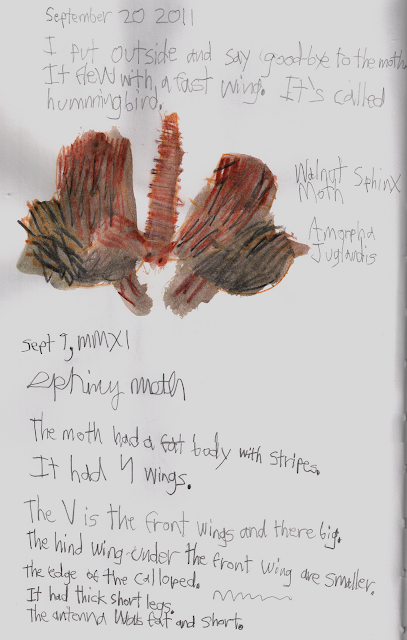 Email ThisBlogThis!Share to TwitterShare to FacebookShare to Pinterest
Labels: science, science of relations