Today, Pamela and I did an activity that worked beautifully, and part of our success was the right frame. When I first looked at the Three Bears Mural, I thought it had potential if I framed it right for one of Pamela's objectives when is referencing me for information when she is uncertain. 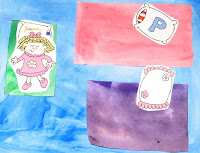 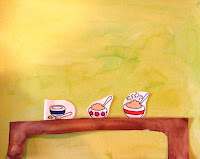 Problem One: I was not about to print an eighteen-page color-ink-intensive mural (*ahem* $$$$$) for an activity that may not get much mileage for a class size of one! So, I decided to only print pages 17 and 18, which had the characters and objects in the story. I decided we would paint our own scenes in the setting: a kitchen, living room, and bedroom. To throw in some uncertainty, she could guess what three rooms of the house we were painting and learn the answer based upon my facial expressions and reactions.

Then, I got inspired about the whole uncertainty thing . . . Part of the activity could be to GUESS what the story was based upon the set and objects. I would hide the characters and objects in a box and pull out the objects one by one. I would describe an object and have her guess what it was to heighten the anticipation and keep her referencing. It turned out to be double-guessing because she had to guess the object and see if she could figure out what the story was.

Problem Two: I did not have any books about Goldilocks and the three bears handy. Besides, having the story book on hand might give away the whole game! However, I remember reading the very different version in Andrew Lang's Green Fairy Book. To avoid composing a story from scratch, I found an etext of Lang's version and adapted it to the material at hand!

Problem Three: This did not seem like enough uncertainty. So, I decided we should make some furniture (three beds and a table). I had to make dimensions large enough for the characters, so she had to guess the length and width of each piece. I wanted to make the blankets with the pillows (part of the objects that came with the mural), so she would also have to guess the color of the blankets. Not only that, she would get more practice at cutting.

This activity turned out to be a blast for both of us. It may seem "babyish" to read Goldilocks to an eighteen-year-old, but she is the one who told me she would rather play with toys than do the teen-oriented games at youth group. At the end, I asked what she thought of it and she told me it was great and fun. I did not really need to ask because her beaming face (hard to see in the photos captured from my camera) told me how interested she was. The following pictures are a combination of what I printed out and cut before starting the activity and what Pamela and I made during the activity (I did not plan the woodsy background because it was serendipity in the form of my tablecloth).

Step One: We painted each room in the set. Pamela guessed bedroom first and painted it blue, then guessed living room and painted it green, and finally got kitchen and painted it yellow. She did not guess the rooms right away and she had plenty of opportunities for referencing. 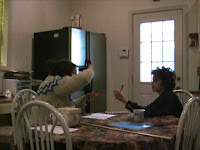 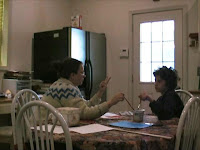 Step Two: We made three beds and a table. Pamela guessed beds first and we made a large red, a medium-sized purple, and a small green bed. She guessed the colors and dimensions. She guessed the dimensions and referenced me several times when she drew the lines measured with a ruler. Purple was the most challenging color because our watercolor tray did not contain it. So, I held up two fingers and told the color I was thinking of is made of two different colors. She guessed a brown table, too. All of this required referencing my face and nonverbal communications for information.

I filmed this activity and pulled these images off the video clip, which lasted an hour and is way too long to edit for the blog. In the top image of the two above, I am holding a ruler while Pamela guesses a dimension. In the bottom one, she is trying to guess the color purple for Mama Bear's bed. As always, you can click the images for a larger version. 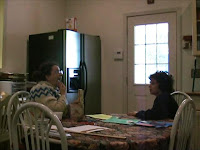 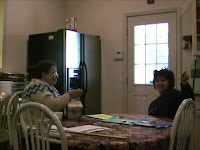 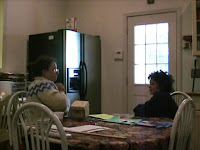 Step Three: While waiting for the rooms and furniture to dry, we continued the guessing game. I pulled out one object at a time: one pillow, another pillow, and Mama Bear's chair. Pamela struggled to get the color of her chair until I pointed to my pink lips (as shown in the top image of three). Pamela also took awhile to guess bowl (the image in the middle), and we had to do major eye gaze and pointing with the cupboard and a variety of clues. Bowl turned out to be more difficult than I anticipated. Pamela is very resilient and persistent in such situations. Porridge did not take as long because I hummed the tune to "Peas Porridge Hot" (bottom image of the three). 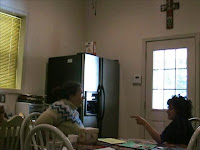 At this point, Pamela guessed that the story was Goldilocks and the three bears. So, I hid the characters behind my back, and she had to guess which character I held (pictured left). She enjoys guessing games. 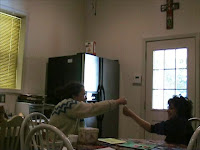 Sometimes, when I showed a character to her, I purposely showed her the wrong one and other times I did it right. She enjoys being surprised by the wrong thing but is glad when I get it right, too. I finished describing all nine objects (three bowls, chairs, and pillows). 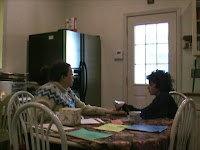 Step Four: By this time, the rooms and furniture had finished drying, so Pamela cut the furniture. She can always use practice sharpening her cutting skills (pun intended). 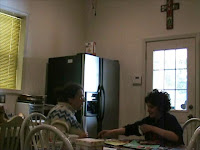 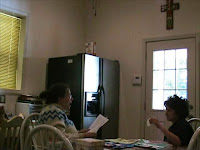 Step Five: We are finally to dig into the story. Of course, Pamela already knew the story, so, to keep her alert, I read parts of it out of order. Sometimes, I said something totally off the wall that did not belong in the story and she laughed at that! You can see in the picture on the left how she listens intently to know where to place the character next. In the one below it, she moves the character into place. 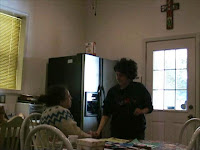 Step Six: Here we have some closure. I wanted to make sure she did not find it too babyish and Pamela confirmed that the activity was great and fun. Part of my parent goals is to give Pamela clear signals when an activity is finished so that she does not suddenly bolt. Sometimes, she will reference me for approval to go. But, that is inconsistent, which is why I am working on being more obvious.
Posted by walking at 14:07

Email ThisBlogThis!Share to TwitterShare to FacebookShare to Pinterest
Labels: framing

That's Austin's new objective, too, Tammy! We just worked on putting that objective "into our own words" today with our CIT! I was thinking, "I'm narrating my objective," and was so focused on that that I could barely think to put the objective into my own words. Guess I was a bit distractible! ;) I love seeing the still shots from the video... how do you do that?
Jennifer

My camera came with Roxio software and there is a way to pull a still shot from any video clip.

Pamela is slowly getting the hang of referencing for uncertainty. When extremely lost, she focuses so intently that she blocks me out. Today's activity she referenced me several times on her own.

It is hard because to test this skill I have to find something extremely challenging but not so challenging as to shut her down.

Tammy, you and Pamela worked SO hard on this. You are coming so far!
Rhonda

I'm so glad you find that website useful. You should see what I did 6 years ago when I first started doing David Syndrey's activities (the author of that stuff)... it was in a paper book- and I'd go to kinkos copy the B&W page and get out my crayolas.... My sister and BIL were living w/ us at the time and I made them color to keep their room and board!

it is neat you were able to make the putting together part of the activity. I had thought about that w/ Andrew but he is such a perfectionist we may have to wait on that one a bit.

pps...in case someone looks at this post in December...the mural will be a different one fyi..when they click on the link...
i think i'm gonna download that one after I looked at your post. i wasn't going to but you made it look fun!

Queen Mum, thanks for reminding me to mention that the activities disappear periodically. I have already printed out the ladder game Fallen Leaves, and I plan to play it today. That goes away TODAY (Friday, November 9, 2007).