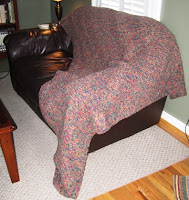 That is the afghan I am crocheting for Steve. Eighteen skeins down and fourteen to go! The blanket should measure 75 inches by 90 inches when complete, and I have the scars to prove it (I keep my yarn tension tight). By the way, the afghan represents It for all you Five Children and It fans.

Rats! Mady tagged me because she tagged the first seven people to comment on her blog after she had decided to choose those unwilling and unknowing victims. I thought commenting was good netiquette . . . Here is my mission should I choose to accept it:

1) Link to the person that tagged you, and post the rules on your blog.
2) Share 7 facts about yourself.
3) Tag 7 random people at the end of your post, and include links to their blogs.
4) Let each person know that they have been tagged by leaving a comment on their blog.

Seven Facts You Don't Already Know about Me
1. I was born on an island (Japan) and have lived fourteen years of my life on islands in the Pacific and Atlantic. Maybe that is why I enjoy books like The Brendan Voyage and Kon-Tiki.

2. I am a Navy brat and former naval officer. The last time I counted I have moved at least thirty-three times.

3. I was THE top twenty-five percent of my graduating class (we had four seniors that year). We were the last senior class ever to graduate from that school.

4. I was the only person in my family to start and end my education at the same school: A. L. Bristol School at Argentia, Newfoundland, Canada. I attended Kindergarten for three months and promptly dropped out because of a move. I graduated in 1980.

5. Speaking of seven . . . my parents had seven children, a yours-mine-and-ours family. It was my flesh and blood sister who dumped a bowl of oatmeal on my head, not my step brothers.

6. Seven historical incidents I would have like to have seen in action: (1) a meeting of the Inklings, (2) a lesson for Helen Keller by Annie Sullivan, (3) Charlotte Mason delivering her homeschooling lectures, (4) Theodore Roosevelt romping with his kids in the White House, (5) William Wilberforce and William Pitt discussing politics, (6) Pa Ingalls telling the story of the pig and the sled, and (7) the performance of Handel's Messiah in which the King stood (just so I could find out why and preserve that tidbit for history).

7. Seven is an important number spiritually speaking. I am a spiritual mutt: my great, great grandparents were booted from a Holiness Pentecostal church for growing tobacco and taking their children to the county fair. My dad grew up Methodist; my mom, Lutheran (Missouri Synod). I was baptized by water immersion in a Baptist church, confirmed in the Lutheran church, and am married to a Roman Catholic. The bottom line for me is that I have accepted Jesus as my personal savior and He guides my life (when I let go of the reins).

My victims are fellow bloggers, both cloaked and uncloaked, who have helped me figure out RDI for Pamela. See what happens when you are nice to someone: Mary, Sonya, Nifferco, Queen Mum, Chef Penny, and my three cloaked amigas Poohder, Jamberry, and Kathy.

Yes, I can count! I tagged eight people because I could not in good conscience leave one of them out! So, what are you going to do, force me to live on an isolated island in the Aleutians? Too late! I've already been there, done that--TWICE!
Posted by walking at 06:48

Email ThisBlogThis!Share to TwitterShare to FacebookShare to Pinterest
Labels: friendship

Aha! You're right, you shouldn't have been penalized for commenting, it was a bit sneaky but I thought it was fair at the time. What a good sharer you are.

That is one heck of a quilt!

I got tagged twice this week! ;-P

Cool, Maddy . . . another Navy brat! My dad retired as a warrant. My sister enlisted in the Navy and married a fellow enlisted man. I became an officer and married an officer. They we all left the Navy!

My brother is active duty, serving on a gator freighter. My husband's brother was in training as a Navy pilot when he died in a freak scuba diving accident. His father enlisted in the Navy when he became of age at the end of World War II and was promptly let go when the war ended.

I guess I should toss out an obligatory, "Go Navy! Beat Army!" since the game is coming up on December 1. As we beat Notre Dame in a stunning upset this year, I think Navy has a shot at cleaning Army's clock.

Bonnie, I am so glad you are not helping me with RDI, which spared you of getting a third tag. I guess proper netiquette would be to avoid tagging someone who has already been tagged that week!

I am fascinated to learn more about you. I thoroughly enjoy your writing and the life of learning reflected in your blog.

At least somebody does not find me too wordy! I wrote a story for A Cup of Comfort for Teachers a few years ago--the editor informed me of my awkward wordy style. A wrote another story this year for My Teacher Is My Hero due next spring. The editor, a different one, remarked about my wordiness. Editors are brutal but, since they publish my stories, I will be keep my mouth shut. Blogging friends are so much kinder!

You have very lovely children, Steph! They look like a load of fun! I am enjoying your blog too and I hope you keep writing!