In Chapter 2 of Awakening Children's Minds, Laura Berk points out that another ingredient of working in the zone of proximal development is the power of conversation:


When people converse with one another, they engage in a form of dialogue called narrative--a storylike mode of communicating, composed of a sequence of events with people as main characters. In the narrative, which may be real or imaginary, characters' roles and mental states--feelings, intentions, beliefs, opinions, and knowledge--are revealed (page 52).

Charlotte Mason believed that the narrative style came easily to younger children once they had words:


Bobbie will come home with a heroic narrative of a fight he has seen between 'Duke' and a dog in the street. It is wonderful! He has seen everything, and he tells everything with splendid vigour in the true epic vein; but so ingrained is our contempt for children that we see nothing in this but Bobbie's foolish childish way! Whereas here, if we have eyes to see and grace to build, is the ground-plan of his education. Until he is six, let Bobbie narrate only when and what he has a mind to. He must not be called upon to tell anything (page 231). 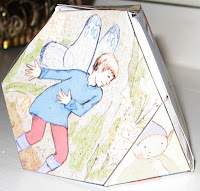 For narrative to extend the zone of proximal development, it helps to establish a shared understanding with the help of scaffolding. The other day, we had some great interactions that illustrate this. Pamela and I made an elfball. (A quick aside for those of you looking for non-toxic toys for Christmas gifts, the toymaker sells her own book.) Pamela cut the entire thing all by herself, and I cleaned up three corners for her. Before taking the next step, I wanted to establish an understanding about how the flap folds need to be made along the lines. She tends to fold without looking!


Pamela could see the need to fold the flaps but did not see the inner lines that form the ball. I talked about what needed to happen next, and I thought she understood. When Pamela said, "I did it," I realized we had a disconnect. She needed more scaffolding to get to my level of understanding, so I demonstrated the next step and she caught on immediately.


I hoped Pamela might figure out what to do next. We needed to tape the flaps to the ball, so I tried to make the point non-verbally. An interesting thing happened. When I was going to turn my gaze to the drawer with the tape, Pamela spaced out (it started when she tapped her face). The brisk, "get on with it" Tammy would have snapped her fingers impatiently and said, "Get the tape." I am working on my personal goal to slow down. This time, I waited and moved my head in odd angles. I realized she was not paying attention, so I waited about fifteen seconds until she referenced me to tell me I could continue. One crucial element of scaffolding for most autistic children is to SLOW DOWN and give them the chance to process and think.


Another element of scaffolding for an autistic child is to communicate non-verbally. Because I have emphasized language and speech for so long, I have neglected body language. Part of the problem was I had read so much research stating that reading facial expressions was too difficult for people with autism. I did not even bother to try. However, since 70% of all communication is non-verbal, I now think it is important to make the attempt. Pamela and I are both way past the neural plasticity limit (that magical age of six) and, yet, we are both learning new ways to communicate! In this case, Pamela got stuck ripping the tape. In the past, she would persist in pulling up, instead of down along the jagged edge. So, I took the tape and demonstrated what to do. She grabbed the scissors, and I shook my head. She reached up to hold the tape, so I guided it into the position. Then, she had no problems with ripping the tape. This entire twenty-five second interaction is completely non-verbal.


I strung together a few examples of declarative language, the last element of scaffolding I will show today. I needed to cut off excess tape, and the imperative Tammy would have said, "Get me the scissors." The declarative Tammy asked, "What do we do about this?" Later, a piece Pamela cut needed to be cut in half. In the old days, I would have said, "Cut this." Instead, I observed, "I think this is too long." By making comments like that, I get to see how Pamela solves problems.

The main difference between being imperative and declarative is not necessarily words, but intent. If grabbing the scissors is the only "correct" response, then I am being imperative. Waiting to see how this interaction will unfold is more declarative. She might have disagreed and come back with, "It's okay." Or, she might have gotten a knife instead of scissors. On the other hand, she might have given me a blank stare. I learn more about how she thinks when I allow her to be an active participant.

At the end of the clip, the phone rang and I told her, "I'm ignoring the phone. The last time they hung up." Pamela stood up to get it, so I told her, "That's okay. Last time, nobody was on the phone. I'm not going to answer it." I had hoped she would ignore the ringing phone because I knew David would get it. I told her what I was thinking, and she decided to sit down and ignore it, too! However, if she had opted to pick it up and hand it to me, I would have answered it. The old imperative Tammy would have said, "Sit down. I'm ignoring the phone." Period. End of story. 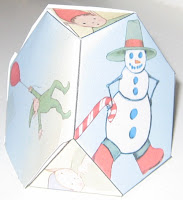 These three elements of scaffolding are what I was missing before I started reading about RDI. I already knew about elements of teaching problem solving like breaking things down into manageable steps, including visual cues, demonstrating what to do, give feedback, only helping when stuck, being warm and encouraging, etc. What is new for me are thinks like slowing down, relying on body language rather than my mouth, and sharing rather than demanding. My focal points when interacting with Pamela are Slow . . . Quiet . . . Sharing.
Posted by walking at 14:22

Tammy, this is going to be helpful for SO many people. It is amazing what our kids can do if we just allow them the time and give them scaffolding we would respectfully give to anyone else. Thank you for taking the time to post it!!!

What a great post, Tammy! Now I finally understand what is meant by scaffolding. I'd heard the term quite a bit and had a vague idea but this post has been great at helping me "get it". Thanks!

have you noticed any changes in public (like church) since doing RDI? Sincerely,dianeG.

Poohder, I made the clip on November 28 and it has taken over a week for the ideas to coalesce in my mind into a sharable version . . . Even if it did not help a soul, it helps me to have to explain it.

Diane G., Pamela is less interactive at church because of the large group thing. I took her out of youth group because it was developmentally beyond her, but she is in the adult choir (small group and a setting that requires less 1:1 interaction--easier for her abilities). So, it is hard for anyone to notice since these changes happened around the time we got into RDI.

However, my sil and in-laws visited about two months after we started, and they noticed a big difference in her connectedness. My mil kept exclaiming about Pamela looking at her during conversations. My mother (who lives across the street) observed that Pamela and she can have conversations outside of my presence.

What a terrific post! Thank you for telling me about the book you linked to in your first paragraph. I just put it on hold at the library. You've got me on a roll tonight!

You left a comment on my blog. I decided to check out yours, and I am glad I did.

I am a teacher at a residential school for autism that uses ABA (in South Carolina!)I have found demonstration, rather than talk, leads to more interaction.

I will be back!