I have not blogged much about David lately. He is reading books from Ambleside Online (to say the year would be a give-away to my guessing game). I love this way of learning because *I*, *the teacher*, get so much out of it, too. I guess I forgot way too much history since high school. In some cases, my textbooks never covered this material!

Guessing Game Number One
For example, do you know when, where, and who was involved with the first European experiment with communism on North American soil? I will let you guess and reveal the source and answer later in the comments! Here are the conclusions from the Governor about his constituents' brush with communal living:

The failure of this experiment of communal service, which was tried for several years, and by good and honest men proves the emptiness of the theory of Plato and other ancients, applauded by some of later times,--That the taking away of private property, and the possession of it in community, by a commonwealth, would make a state happy and flourishing; as if they were wiser than God. For in this instance, community of property (so far as it went) was found to breed much confusion and discontent, and retard much employment which would have been to the general benefit and comfort.If (it was thought) all were to share alike, and all were to do alike, then all were on an equality throughout, and one was as good as another; and so, if it did not actually abolish those very relations which God himself has set among men, it did at least greatly diminish the mutual respect that is so important should be preserved amongst them. let none argue that this is due to human failing, rather than to this communistic plan of life in itself. I answer, seeing that all men have this failing in them, that God in His wisdom saw that another plan of life was fitter for them. 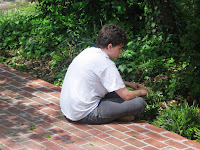 David and I came across an interesting quote in a biography of a great American yesterday. It sounds so much like Charlotte Mason's view nature, but these are not her words. You can cheat and google it, or have fun and guess!

1. The awakening of a greater interest in practical nature lessons in the public schools of our section.

The thoughtful educator realizes that a very large part of the child's education must be gotten outside of the four walls designated as class room. He also understands that the most effective and lasting education is the one that makes the pupil handle, discuss and familiarize himself with the real things about him, of which the majority are surprisingly ignorant.

2. To bring before our young people in an attractive way a few of the cardinal principles of agriculture, with which nature study is synonymous.

If properly taught the practical Nature study method cannot fail to both entertain and instruct.

It is the only true method that leads up to a clear understanding of the fundamental principles which surround every branch of business in which we may engage. It also stimulates thought, investigation, and encourages originality.

Who has not watched with delight the wee tots with their toy set of garden tools and faces all aglow with happiness and the yearning expectations of the coming harvest as they dug up the earth and dropped in a few seed or illy set an equal number of plants--with what joy and satisfaction they called it their garden or with what enthusiasm they hailed the first warm days of spring with their refreshing showers which bespoke emphatically the opening of the mud pie and doughnut season, and how, even though they were water-soaked and mud-bespattered from top to toe, how very happy they were at the close of such a day's work. So on through the whole list of childish amusements. Instinctively, they prefer to deal with natural objects and real things.

Mystery Science Theater Shakespeare
The last thing we did yesterday, before David headed off to a beach retreat for the weekend, was reading aloud the last act of A Midsummer's Night Dream. David, a tenth grader, has already read five of Shakespeare's plays; I had only read one my entire year of high school. I could hardly understand the plot line, much less get the jokes.

In Scene I of Act V, the four happily-united couples watch a play to celebrate the nuptials of King Theseus and his Amazon Queen Hippolyta. Shakespeare loved sneaking a play within a play, or, at the very least, having one or more character in disguise. Unfortunately, the men acting the tragical moments of the classic story of Pyramus and Thisbe were craftsmen, but their trade was NOT the theater. In a nutshell, the hero Pyramus and his secret love Thisbe are to meet at a wall and talk through a chink in the wall to one another. When Thisbe does not arrive, Pyramus searches for her and finds her bloody cloak. He hears a lion roar and, assuming the lion took his love for a midnight snack, stabs himself. Thisbe finds her love dying, and she stabs herself.

Tragedy turns into comedy because the play within a play is so poorly performed. The first hint of this is when Philostrate warns the king how the scene affected him, "And tragical, my noble lord, it is; for Pyramus therein doth kill himself: which when I saw rehears'd, I must confess, made mine eyes water; but more merry tears the passion of loud laughter never shed." After the king demands to see the play anyway, Philostrate warns him again, "No, my noble lord, it is not for you: I have heard it over, and it is nothing, nothing in the world; unless you can find sport in their intents, extremely stretch'd and conn'd with cruel pain, to do you service."

Thanks to a Charlotte Mason philosophy of education and Ambleside Online, David not only gets Shakespeare, but he gives me better stage direction than I can think of myself! When I read the prologue, he told me I was not reading it right because I sounded good. One character's comment told me how to read--fast with no breaks, except in the wrong places, "He hath rid his prologue like a rough colt; he knows not the stop." I read the lion too loud and scary, David stopped me and suggested a wimpy lion a la Oz's cowardly lion. And, later on, the royal barbs confirm his instinct, "A very gentle beast, and of a good conscience" and "a goose for his discretion." He did approve of my Ethel Merman voice for Thisbe.

The king and his queen found sport indeed! The couples found sport! We found sport at the badly done scene. As we read through the scene, David and I half-expected the robots from Mystery Science Theater 3000 to pop in and add their own barbs to the ones being tossed out by the couples watching the play:
"Indeed he hath played on this prologue like a child on a recorder!"
"His speech was like a tangled chain; nothing impaired, but all disordered."
"This is the silliest stuff that ever I heard."
Right before Thisbe's death, "I hope she will be brief."
"No epilogue, I pray you; for your play needs no excuse!"

Philostrate was right! The poor wall forms his fingers to be the chink (tells the audience what it is) and spends so much time on exposition he spoils the whole scene. Some keep butchering "Ninus' tomb" to "Ninny's tomb." At times, the actors answered the hecklers back in all seriousness a la Ferris Bueller. At one point, the couples spend more lines criticizing the poor moon than the moon has dialog! Who knew the bard could be so much fun?

P.S. I am not passing out prizes for my guessing games because the pursuit of knowledge is inherently delightful and rewarding in and of itself!

P.S.S. No rotten tomatoes please!
Posted by walking at 21:24

I'm interested in the answers to both guessing games! Is the first the governor of the colony of settlers that came from the Mayflower? I just cannot place who the second person might be. I'm eagerly awaiting the answers!

I guess this takes away that lingering question if Ambleside is challenging enough to be considered college prep! ROFL

Can we have the answers now, please? :)

Hint for Game #1:
The experiment with communism happened early in our history! Congratulations to LAA and family who answered correctly in a comment I will publish as soon as more people have had a chance to guess!

Hint for Game #2:
The nature lover is a male scientist who was a professor of agriculture, artist, musician, and knitter.

Game #1 answer.. the governor of the Jamestown colonies?