Before I launch into this more light hearted post after the sturm and drang of my graphic organizer monologues, I want to know who gave my address to anti-Charlotte-Mason publishers like A Beka and BJU Press! I have my suspicions . . . ahem, the buccaneer blogster who took me in with her April Fool's Day prank. Of course, it could be all coincidental . . . 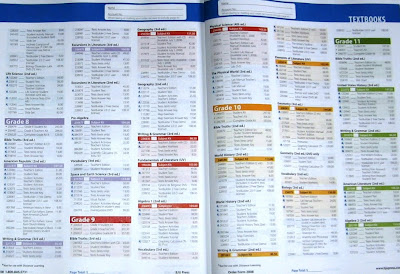 Today, the kids and I took our two dogs to the vet's office for a follow-up to their checkup. Loa, the eldest dog, has a thyroid condition that caused her to balloon to almost fifty pounds last year (now she is a svelte 37 pounds). She sings arias about this bizarre place where aliens abduct her, poke and prod her, and do all kinds of horrible things to her. From the moment we hit the parking lot until she's back in the car, she howls and moans nonstop (except when we shove a dog biscuit in her mouth). 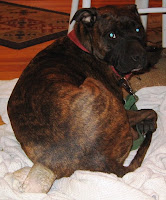 The other one, the Arwenator (or Beastie Girl), is so hyperactive that she foams at the mouth at the sight of any and all newcomers. Don't let that sweet innocent look on her face deceive you. The moment she sees a new person her tail starts banging everything in sight and ought to be registered as a legal weapon. She is the poster dog for canine Ritalin. If I could bottle her energy, I could feel twenty-years-old!

Today in the 150-mile round trip to the vet's office, Pamela and I enjoyed playing the newest game invented at the spur of the moment on the road. We spent our time looking at license plates: when I stick to the speed limit of 70 MPH, cars pass frequently enough to maintain Pamela's attention. As soon as a car passed, we played our game and reacted. Then, Pamela turned back to look over her left shoulder and peered at the next car or truck planning to pass. The jackpot was spotting unusual states like Illinois or Oregon. Quebec and Puerto Rico completely perplexed both of us. We felt the suspense every time a car was about to pass and laughed and giggled with excitement if the car was out of state. This was emotion sharing at its best!

We have different variations of the game. The most exciting thing about them is that we made them up and often find ourselves thinking of new variations. (1) Figure out if you would fly or drive to that state. If you drive, then you state whether or not you would need to stay in a hotel. (2) Figure out if the car is from a different time zone. Pamela's latest self-taught accomplishment is learning all of the states and time zones and how to calculate times in other zones. (3) Figure out if the car is going in the wrong or right direction. Pamela's sense of direction is so sharp we call her GPS!

I began thinking about what good travelers Pamela and David are. They have never required massive doses of electronics in the car. For example, today, Pamela had her classical CD's and kept the music flowing, while David listened to his iPod. He also narrated some books for me and read a book for pleasure: How to Stay Christian in College. Back in 2001, we survived a 4,500-mile journey from Colorado to Homer, Alaska without a DVD player or video games (okay, I do admit that David wielded his Game Boy until he left it at a rest stop in Washington and did not realize it until an hour down the road). Listening to an audio version of Trumpet of the Swan helped him recover from his loss. They have enjoyed many long, long trips with amusing little games we invent when the mood strikes.

Now, I am the first to admit some kids are such miserable travelers that only a DVD player can keep the peace. One thing I did with three-year-old David to break the habit of whining when the kids and I traveled from Louisiana down the Florida peninsula and up to Connecticut was to play stop the action. If he began complaining, I warned him I would pull over and stop so he could see the real meaning of boring. After a couple of stops, he got the message. When I was a tween, my parents traveled from Washington state to Illinois to North Carolina and back to Illinois with six kids, camping equipment, and a dog with three puppies. When Bill Cosby did the "he touched me" bit, I knew he had bugged our brown van. I spent that trip escaping to the gritty world of Oliver Twist.

Rather than share with you all of the tricks we have learned throughout our years of traveling, I will let masterly inactivity rule the day. The best games are the ones your children invent for themselves. For more ponderings on play, read Rebekah Brown's post called The Art of Play.
Posted by walking at 17:59

Email ThisBlogThis!Share to TwitterShare to FacebookShare to Pinterest
Labels: travel

ok, I have to ask... where did you visit in Illinois as a child? Those are my stompin grounds!

We love a good road trip! Jman and Sly are great travelers too, no brain-numbing electronics required. Road tripping is way too much fun to spend it watching videos or playing gameboy! There are brown signs to chase, songs to sing, games to play, books to read, and it's hard to beat looking out the window, and just plain talking with each other too.

And I also have to say, How to Stay Christian in College is a great book. We used it with a group of college kids at a previous church. A must read, for kids and parents alike.

I swear it wasn't me! I'm not that much of a scurvy pirate to do that to you! ;) I did get both of those catalogs today as well, but I at least know why... I ordered from Abeka last year (history for Austin and readers for Reece), and I order my ITBS tests from BJU.

You know, that would be a way to get back at folks you don't really like... you could sign them up for Abeka and BJU catalogs! ;)

You knew i was planning a road trip this month didn't you?!? The King thinks we won't survive without a dvd player, but i just don't think i want to do it. I'm planning no packing a travel kit for each of the boys for on the way home. We're driving at night to get down to FL.

Once the movie watching starts they usually don't want to stop. Much easier listening to books on cd.

I love Bill Cosby himself. The "he touched me" is a classic. Arwenator... Car Wars... I can't believe there's another Christian, sci-fi, homeschooler out there. I love it!

I love brown signs too, Jamberry!

Masterpiecemom, we rented a van with a DVD once--the kids thought it was cool, but they never asked about getting a car with one!

Bonnie, I'm a real contradiction because I enjoy sci-fi movies that aren't too far out there, but I also love moldy oldy classic novels and rarely read anything modern.

well road trips are so cool when you are with your dad.

My dad was great. We used to go camping with every move, so we have all kinds of stories of our car wars! (She touched me! He's looking at me! Bill Cosby bugged our car to get material for his comedy.)

My dad had one huge fault (perhaps, because there were seven kids). We never went sight-seeing and went straight from one campground to the next. He did not even drive us by Mount Rushmore when we saw the exit. My best friend from high school experienced something worse--her dad didn't stop for the Grand Canyon!