While we are working on a new objective, we have not closed the book on helping Pamela with her anxieties. We can add another objective to our plate because the whole family is mindful of how to handle moments of anxiety. We have a game plan for current issues, and, if any new ones crop up, we have an idea of what to do. Guiding her through uncertainty (the root cause of most of her worries) is part of our parenting style (when we are not grumpy or exhausted--hey, we are only human). Sunday was a good example.

David went to the early service. He got home just as we were leaving for the late service (our church is around the block, so we walk). Steve specifically told him to feed the dogs and let the hyper dog out of the kennel. When we got home, we planned to pick up David and drive to a restaurant for lunch. David had not done as requested, and I could hear Steve scolding him (which David deserved). I knew Pamela would feed off of that, so we walked to the front yard and sat on the brickwork. She knew David was in trouble, but she saw me acting calm and neutral so she stayed cool. Then, David walks over to us in a huff and vented. I told him that it was between him and Dad, and my job is keeping Pamela neutral. If he had to vent, I told him to find another spot. If I had not been a buffer, Pamela would have had moments of anxiety where she grits her teeth. I prevented it by showing her that I was going to sit there with her and enjoy the glorious sunshine!

We drove to the restaurant for lunch. David and Steve did their usual fast-paced repartee in the car. I could tell Pamela was growing frustrated because she could not follow them nor keep up. Her frustration was beginning to build into anxiety. I stopped the banter and reminded them that Pamela could not keep up. Then, I repeated Pamela's question for Steve so he could answer it and help her feel competent and part of the conversation.

After our meal, we walked by a table with a family and a baby seated in the high chair. While we were putting the trash and trays away, Pamela stopped and walked up to the baby with very friendly overtones. We did not know the family so we moved on and I said, "Do you like babies?" Pamela answered, "Yes."

Pamela does not go to church events very often because we hope she will want to go because she feels competent. Sunday night, she wanted to go to a church spaghetti dinner (and we brought her gluten-free noodles and sauce, of course). She sat at the table, while we headed to the food line, where we needed to snag a plate and drink for her.

Someone in our Sunday school class walked up to Pamela and greeted her. She was wearing a pretty, shiny ring. Pamela grabbed and massaged her hand and looked at the ring mesmerized. The lady said, "Pamela, do you like my ring?" Pamela looked her in the face and said, "Yes." Then, the lady said, "I like your hair. Who cut it?" Pamela didn't quite get the question, but she did answer with, "Me!" So, the lady said, "Did someone cut your hair for you?" Pamela again confused, said, "Yes, me!" What impressed the lady the most was how Pamela looked her in the face while they talked! While the lady was relating this anecdote story to us, her daughter walked over to the table to give Pamela her plate and drink. Pamela looked up at the daughter and said, "Thank you." They were both very amazed at how well Pamela engaged them without direct prompting.

While we ate, Steve was talking to a fellow car buff. They talked about cars, selling toilets, and washing the siding. Pamela had two issues: a slight case of jealous and trigger words. Whenever she would start to over react, I would explain the whole story: "Oh, Bob just moved into his new house." Steve was able to converse in peace while I kept Pamela regulated! 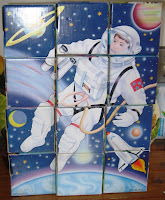 Yesterday, Pamela did a fabulous job in reacting to visual and auditory barriers I put in her way. She seems to know when I am not able to see and hear what she perceives. She overcame every challenge I gave her. Instead of getting frustrated at her mother, who seemed to be acting like a blockhead, Pamela was very playful and laughed. She required hardly any scaffolding (only for removing the head phones). The most exciting moment was when she automatically knew that she had to move to see the astronaut that I built out of blocks. I have saved those Discovery Toys blocks for ten years and I am so glad I did! They are quite awesome for a physical barrier that can also function as showing two different perspectives.

Pamela clearly has a higher level of understanding than I thought. I suspect that her aphasia (which has prolonged her confusion with pronouns) has masked her true abilities. We still have to demonstrate a fuller understanding for her to master this objective. I think you will enjoy watching her shine. I had a hard time repressing my urge to do an endzone dance during this recording.

Email ThisBlogThis!Share to TwitterShare to FacebookShare to Pinterest
Labels: theory of mind

what a great video!!! I absolutly loved it.
Bea

I'm not sure who's more amazing--you or Pamela!

you're so creative with your activity ideas!

Awesome Tammy, plus THANKS for the chuckle, I loved seeing you beebop to the music. It tickled my funny bone. Rhonda

I love watching her blossom. :-)

This is terrific! Thanks!