I Did Chores (Introduction to the Concept of Negative)

Since June, I have had math on the brain, partially because Pamela will start pre-algebra this year. At the ChildLight USA conference, my presentation covered Charlotte Mason's ideas about teaching math. I had never examined her views closely until then because I have very strong views of my own since I have a degree in mathematics. My goal this year is to test her ideas through pre-algebra with Pamela. What makes it difficult is that Charlotte Mason did not go into great detail about teaching post-elementary school math in any of her books. However, Parent's Review articles do shed some light, especially the ones published during her lifetime as she edited the magazine!

Charlotte Mason definitely believed in the zone of proximal development: "Care must be taken to give the child such problems as he can work, but yet which are difficult enough to cause him some little mental effort" (Volume 1, page 255). She understood that assigning tedious drawn-out problems kept children occupied for too long, ending up with nearly right answers, burnt out minds, and discouraged hearts. She worried about children who knew their tables backwards and forwards but did not understand their purpose nor rationale.

She found that children could uncover mathematical truths by exploring and explaining concrete objects and real-life applications to pictures of these ideas to mental images to abstract written numbers and symbols. Mill’s Logic summarized what she learned during her years teaching the children of English coal miners, "All who wish to carry the child's mind along with them in learning arithmetic, all who wish to teach numbers and not mere ciphers, now teach it through the evidence of the senses in the manner we have described" (Volume 1, page 262). The typical process for the mind to visualize a new concept would be to go from concrete manipulation to explaining pictures to describing mental pictures to written equations.

My goal is to extrapolate her ideas to pre-algebra. The first lesson is about negative numbers, and I have been inventing games that develop the concept without actually using the term negative. Whenever we go shopping, mail packages, or eat out, we talk about spending money. We also talk about how Dad earns money when he goes to work, while David earns money for taking care of people's lawns. Up until recently, we have not focused on chores and earning money and, with Pamela's growth in dynamic thinking, I thought it a good time to start. 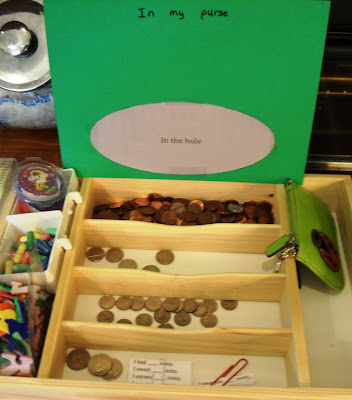 Practicing concepts about money has captured Pamela's imagination. I have little trinkets for sale and spending money is like subtracting. I have chores ready to go and earning money is like adding. IOU slips are on hand so that Pamela can go into debt to buy trinkets, which means she ends up with a negative balance. She can pay back any debt by doing chores. I made a graphic organizer for Pamela to place her coins ("in my purse") and her IOU slips ("in the hole"). I also have a slip to help her keep track of what happened and figure out her balance. The following video is 10 minutes long, but I think it will give you a good idea of how it works.

Even though we focus on math, I try to take advantage of any opportunities for relationship building as shown in the following video.

Pamela has latched onto the idea of chores rather strongly. Yesterday, I told her I would pay her a nickel if she put her clothes in the laundry room after she took her shower. She came up to me a half hour later and told me, "I did chores." Today, I did not mention a thing and she came up to me as soon as she stashed her dirty clothers, "I did chores." So, we figured out how much money she earned all together. This dovetails very nicely with one of our long-term goals for Pamela to monitor things we have requested and let us know when certain events have occurred.

If you want Pamela to get practice with negative numbers, I could let her balance my checkbook. Sorry. I couldn't resist.

I LOVE the way you're introducing this concept in ways that are both practical and hands-on before exploring it academically. Brilliant! :) I'll have to keep these things in mind for Trishy, when the time comes.

Ahem, besides giving God the glory for all things bright and beautiful, these ideas are inspired by Charlotte Mason. Stay tuned . . . I have a few more to share once I flesh them out.

I'm all on board with CM and all set to start with my most difficult child this year... EXCEPT in this area of math! :) My husband was also a math major and he also was in a teaching program and he did not like the new ways of teaching math. We have been text booking it all along and my kids are learning fine... We'll see if we jump on board someday. I'll be watching.

What curriculum are you using? What does your dh consider "old" math?

My issue with Pamela is that, because she spots patterns easily, she can pick up procedures without any problems. But, knowing WHEN to apply WHICH procedure is another matter. Recognizing the need for a certain procedure in the context of life is not obvious.

So, I am going to start off very concrete and build concepts before teaching the algorithms.

We're just using Abeka and we've always been happy with it. I'm SO NOT hands on! I have little kids coming up that I don't think have the natural tendency towards math like their dad and older siblings. I'm thinking these are going to need some more effort put in.

When I say older math I just mean textbook math. Tony is very creative and if he was teaching them math I bet he'd be far more creative than I am. I'd rather get out the book, get it done and then move onto being creative in other subjects! :)

Part of my problem might be that maybe I don't always know what to use in real life and so passing that on is difficult. I figure I'm married to a math guy so why strain my brain?! :)

Give me a book or a paper to write and I'll be happy, give me 20% off my shirt and I'll know that I have to pay "a little bit less!"