Have you ever looked on the Internet for original ideas in math? You can find tons of supposedly "fun" worksheets or kill and drill computer programs that focus on procedure or facts, not knowledge.

We covered area in our first week of 20-minute geometry lessons, Charlotte Mason style. She suggested giving a child "such problems as he can work, but yet which are difficult enough to cause him some little mental effort" (Volume 1, page 255). In other words, tedious long division problems or cutesy little worksheets are pointless. If a math lesson does not spark an original thought, then it is a waste of time!

Rather than make children memorize, Charlotte recommended making math so clear and understandable that any other way of learning a fact or doing a procedure would seem absurd.

"We remember how instructive and impressive Ruskin is on the thesis that 'two and two make four' and cannot by any possibility that the universe affords be made to make five or three. From this point of view, of immutable law, children should approach Mathematics; they should see how impressive is Euclid’s 'Which is absurd,' just as absurd as would be the statements of a man who said that his apples always fell upwards, and for the same reason. The behaviour of figures and lines is like the fall of an apple, fixed by immutable laws, and it is a great thing to begin to see these laws even in their lowliest application." (Volume 6, page 152)

How does this look in real life? My plan for this week was to introduce the concept of area and work through the area of various shapes. Most curriculum hand down the magical formula from on high that some smart dead guy figured out a long time ago. I wanted Pamela to discover it for herself.

Day One
I gathered a bunch of flat, rectangular objects (refrigerator magnet, sticky note, Netflix envelope, etc.) for Pamela to measure. First, I grabbed two items and asked her which one was bigger. She had no problems understanding this preview of area. I had a 7" x 10" grid (an Excel spreadsheet) that represented 70 square-inch blocks. I gave Pamela a piece of paper with columns for the object, length, width, square inches, and shape. We measured length and width with a ruler and outlined the object on the grid. Then, I introduced the idea of a square-inch and measured the sides of one. We counted up the number of square-inch blocks in the first item, and then Pamela recorded her observations for the first object. We continued the process until we hit the fourth object when she figured out the pattern: length times width yields the square inches. 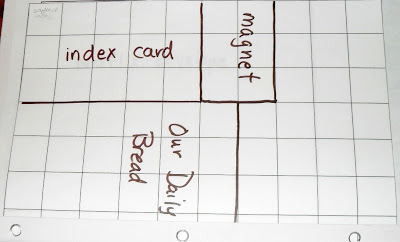 We repeated this process for all seven objects so that Pamela could know through her own reason that the area of a rectangle is the length times width. Anything else would seem absurd to her. Imagine I said to ADD the dimensions. She would know that made no sense because she figured out the pattern for herself!

Day Two
This lesson took much longer because I wanted her to apply the same thinking to larger rectangular objects. At first, we covered the objects with the grids. You can see how we covered the top of the toaster with grids.

When the objects were too large, Pamela calculated the square inches for herself. She worked hard until she finished the fourth object and realized she was not even half of the way done. Measuring large objects with a ruler required her to skip count and do mental math in her head. She became tired and disheartened with five objects left. I checked the stopwatch and realized she had only four minutes left, so I showed it to her and said, "We only have enough time for one more problem!" Pamela's face brightened and she eagerly went back to work. Charlotte knew the value of short lessons: "Give him short sums, in words rather than in figures, and excite him in the enthusiasm which produces concentrated attention and rapid work" (Volume 1, page 261). 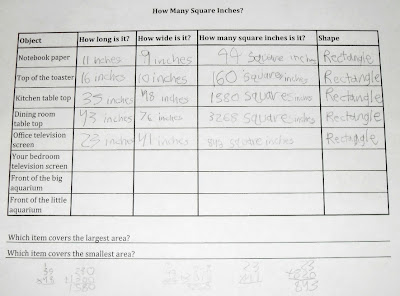 Day Three
Rather than jump to the formula right away, we worked on word problems today in which Pamela drew the items (and even colored them) and figured out the answers. Since we dropped the association method, I even encouraged her to write the answer in complete sentences. Often we jump so quickly to new symbols and formulas that meaning disappears. "I recommend strongly that no new symbol should ever be introduced before it is necessary to use it in practical work. A new labour-saving symbol is like a new machine, extremely interesting when you realize its usefulness, merely strange when you see it lying idle" (Parent's Review Article). 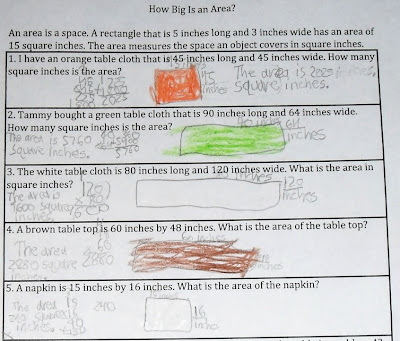 Day Four
Pamela discovered how to find the area of a triangle. I spotlighted the difference between the area of a rectangle and triangle with similar dimensions by having Pamela doing them together and filling out this chart. 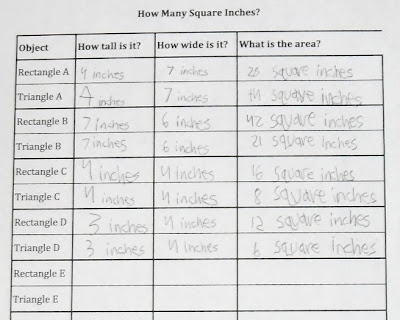 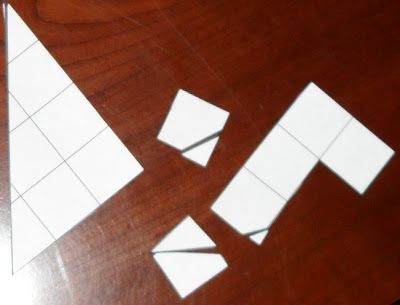 We found an alternate and easier way to do this with a square! 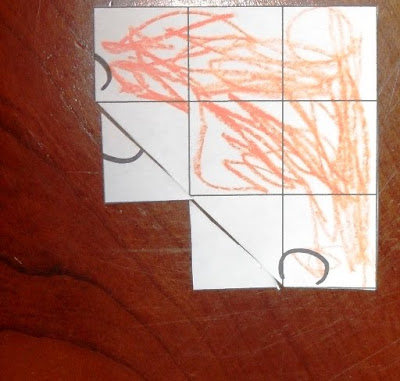 As you can see on the video, Pamela did well. She caught onto the pattern by the third and fourth set.

Day Five Plan
We continued to work on triangles, which are tricky because of the concept of base and height, which I plan to flesh out next week. We had a wonderful week and Pamela's opinion of geometry is that, "Great! Fun! I measured." Now, that is what I call an accurate gestalt of our week.

Let his arithmetic lesson be to the child a daily exercise in clear thinking and rapid, careful execution, and his mental growth will be as obvious as the sprouting of seedlings in the spring. (Volume 1, page 261)

Brilliant! And now you just cleared it up for me too!! I'm learning right along with Pamela. Rhonda

i need to read this in parts. i really like it though..and that pointless comment at the beginning makes me pause...

I love your living approach to math! I agree that the "rules" are given to children too early, long before they make sense and without giving them time to try to figure out the rule for themselves.

Please, please, submit this post to the Charlotte Mason blog carnival! You can submit it here. There are so many moms wanting to transition to living math but struggling for specific steps.

Amen to what Jimmie said. Lots of us would like to teach this way, but we don't "see" math like this...

I think that is because we were poorly taught! Digging into Charlotte Mason's ideas about math have inspired me to dare to try something different this year. Two weeks into this year, it seems to be working well!

Thank you for sharing this! We want to do more living math but my brain just doesn't wrap around it yet. I'll be back to re-read this.