Pamela is clearly in a search for meaning. The other day, we were reading the introduction to Augustus Caesar's World, which began with the myth of Janus and Rome's city gates. The story shifted to Octavius, who was attending college in Apollonia. Pamela wrote on her graphic organizer, "Octavius, 18 years old." I told the year was 44 B.C. Then she asked me, "What is B.C.?"

I didn't know whether to praise God or Snoopy dance, but ecstatic does not begin to describe my emotions. Not only is Pamela thinking and trying to make connections, she is able to ask me for more information! She could not do this two years ago!

I drew a hasty timeline and wrote "Creation" at the beginning and Pamela said, "Just like Old Testament." Then, I wrote "Jesus as a Boy" with a the number zero below and asked where the New Testament would go. Pamela pointed in the right place. When I wrote "Today" at the end, she said, "21st Century." I finally explained that A.D. is Anno Domini, Latin for "Year of the Lord", while B.C. is English for Before Christ. 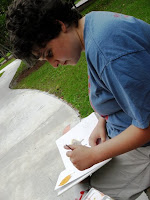 Full of inspiration from my friends at ChildLight USA, I matched our first week with the recommendation of Charlotte Mason very closely. The highlight for Pamela was poetry, especially reading Walter de la Mare's Tired Tim in the mopiest, boredest voice and the pouchiest lip! Imagine! A person with a history of severe language delays loving the pictures and images painted by words.

The keys to helping her love poetry are context and meaning. While Pamela had no problem with Tired Tim and The Horseman, the other three poems were tough. Pamela has no idea why a butcher shop would disgust the poet, so, before the reading, we talked about things we thought that were ugly. I explained to her that our meat is wrapped us nicely in packages we buy at the store. In those days, people might see dead animals at the butcher shop. As I read I Can't Abear, Pamela's facial expression showed me she understood the poem. Before reading Mrs. Earth, we cleaned a silver spoon with a white cloth so Pamela could see the black tarnish and we studied two cans of paint, one rusted and one shiny. I thought the hardest poem would be Up and Down because I had trouble following it. Then, I found a map of Dicken's London and printed it out for Pamela. Before the reading, Pamela colored all the places mentioned in the poem with a yellow crayon. While I read it to her aloud, Pamela astonished me with her auditory processing skills and pointed out things like Ludgate Hill, Fleet Street, and Temple Bar on the map. She sure has come a long way!

The following is a list of what we accomplished this week, according to plan. The keys are to have short lessons and to keep in mind what is really important (context, meaning, process, ideas). We are not at full schedule yet, but we managed to pull this off in less than 3 hours and 15 minutes a day. I do not have as much literature as other Charlotte Mason educators due to Pamela's severe language delays. 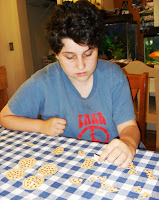 Mathematics
We did three short lessons, totaling an hour a day, on geometry, number theory, and algebra/arithmetic. In geometry, Pamela measured the length and width of small and large rectangular objects, learned what a square inch is, and discovered how to find the area of rectangle by counting square inches or multiplying length times width. She measured the base and height of right triangles and discovered how to find their area. In number theory, Pamela played various games that preview the concept of negative. Her B.C. question inspired me to invent a time travel game, too. She now understands how to add two negative numbers and how to add a positive and a negative, except when it crosses zero. Even though we said things like "going north/south" or "going back/ahead in time" rather than negative or positive, Pamela was practicing how to handle negative numbers. In algebra/arithmetic, we reviewed fractions and covered whole, equal parts versus unequal parts, fraction, numerator and denominator, the syntax of saying fractions, and equivalent fractions. I cleared up some gaps in her understanding and found out where she needs work.

History
We worked out of five books for our two threads of ancient history, and Pamela added pages to the book of centuries we started last year. For the most ancient of history, Pamela read and wrote a narration of Cain and Abel (Chapter 4 of Adam and His Kin and Genesis 4:1-15 from an illustrated version of Genesis). For the era leading to the birth of Jesus, she just started Augustus Caesar's World and typed narrations for 44 B.C.. She recorded some sidebars from The Amazing Expedition Bible and the meeting between Elizabeth and Mary at about 3-6 B.C. (Luke 1:39-56 of an illustrated version of The New Testament). I plan to blog her book of centuries down the road.

Geography
While formal geography was not on the schedule, we located Fleet Street, London and found Apollonia on a map of ancient Rome. I pointed out Sicily to Pamela and told her that her grandparents lived there for many years. Literature, history, and family reminiscing provide many opportunities to study maps! 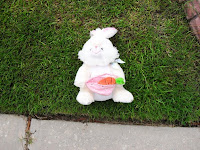 Language Arts
Pamela did studied dictation of a one page story about Pandora and needed no special lessons. She started memorizing The Horseman for recitation and practiced her articulation in reciting, reading aloud poems, and singing songs. She typed narrations of Watership Down and her history readings. Pamela copied a poem she selected called "A Morning in Fall" by Reeve Lindbergh and part of a story she picked called Who Took the Farmer's Hat? into her copy journal for penmanship. Pamela completed Lesson 1 of Writing Strands Level 2 (emphasizing adjectives and commas). She took a picture and typed a story about her rabbit. Pamela learned syntax for saying fractions correctly by comparing the denominator to how we say singular versus plural nouns. She wrote out many of her answers in math in complete sentences. Pamela orally narrated her readings and two paintings by Monet.

Literature
Pamela read five poems by Walter de la Mare and one chapter of Watership Down.

Life Skills
Pamela helped me deliver hot lunches to eighteen elderly people through the Meals on Wheels program. She learned to rename and color-code tabs of Excel worksheets as well as add, move, and delete worksheets. She is creating a workbook with the calendar information she loves to track. She decided which way to turn while we were walking the dog, taking a different path every day. We talked about people we saw while we worked up a sweat (the neighbor's son getting off the bus and Opa driving to Sumter). She spent a little bit of time with her cousins who are visiting from Virginia. 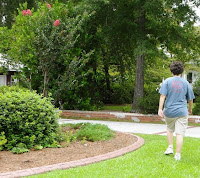 Recreation
We exercised by walking the dog and took one nature walk sans pooch. Pamela painted a leaf in her nature journal and nearly has the melody for Blessed Assurance and Land of the Silver Birch. What astounds me is how expressively Pamela sings: when she sang in the choir a few years back, I could hardly get her to articulate and now she sings with gusto! We listened to Mozart in the car (Pamela nearly always puts on classical music in the car anyway) and did two picture studies on Monet: The Picnic and Camille Embroidering.
Posted by walking at 18:11

So excited for you, Pamela and the rest of the family at seeing her progress so much!!! It's wonderful that the learning never stops. :D

I am always impressed by your teachings you so creative!!

WOW, Tammy, what a GREAT week -- I can't believe you had time to blog so thoroughly about it, too!

Fortunately, tiffrutherf, I did not have to imagine all this because Charlotte Mason came up with these ideas over one hundred years ago. Plus, some of my CM compatriots share their understanding and it helps fuel the creativity.

Penny, I'm a mom on a mission, like all of us here!

i love this post because it shows 'school' and 'life' and how the two can be done together.

True, Queen Mum. At this point, we are not using any textbooks and Pamela loves what she is learning so much she talks about it even when we are not schooling.

I am delighted and amazed at how much she loves poetry! This week, it was her favorite subject--AGAIN!