Pamela and Steve are sharing joint attention, a cognitive skill often lacking in autism, as they look at his Blackberry, while he checks his email. Joint attention, a triangulating relationship between two people and an external stimuli, is much more than a snapshot in time. By the age of twelve months, a baby desires "to broaden her own subjective impressions by learning those of her partners. She is borrowing the perspective of another person's mind to enhance her own ability to obtain meaning" (The RDI Book, page 120). We are using this ability to guide Pamela through three cool milestones right now, captured in a very brief conversation caught on video at Walmart the other day.

Pamela is more able to tolerate things that might be broken. I dropped the camera when I tried to turn it on. While I was picking it up, Pamela asked, "Is it broke?" A few years ago, such an incident would be cause for a meltdown. Instead of flipping out, she noticed that I was calm so she referenced my reaction and stayed calm, too.

For some reason, Pamela switched topics to Steve and his running schedule. Because Pamela did not like his unpredictable departure times for going to work she practically stalked him until he was out the door. Last January, as part of our whac-a-mole campaign, we started working on her anxieties and very slowly, but surely, she learned to embrace the idea that he leaves for work at a different time every day and some days he even works at home. Her final tactic was to talk Steve out of running because she observed a pattern between running and later departure times. We guided her out of pestering him about that too once he realized that his soft spot for Pamela allowed her to manipulate him, knowingly and deliberately.

Tuesday morning, Steve's touch pad on his work laptop died. Pamela walked into the room while he quietly tried to figure out the problem. She stayed calm as we searched the drawers for a wireless mouse, located batteries, and realized the mouse was no good. She asked, "Is it broke?" Steve calmly replied, "I am going to give it to the techie at work. He's really good. He can fix anything."Pamela is also learning to monitor my movements. When we dropped David off at the dentist, she sprinted ahead of me into the waiting room and let the door close on me. Her cousin Jose and I stood outside the door, peering at her through the glass, waiting for her to realize what happened. On the way in to pick up David, Pamela showed much more caution. In the second and third clips, filmed the next day, we are going in and out of a new building and Pamela monitors me much more carefully this time. 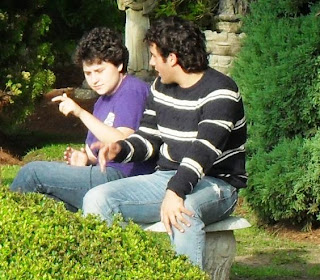 Pamela shares a close bond with her cousin Jose, who is only six months older than her. She cracked up him up the other day when he was chatting with one of his friends via webcam on his laptop. Jose asked her to say hi to his friend. Feeling a bit jealous of competition, Pamela said, "P-U! You stink!" Then, she fired her magic finger (seen in the picture to the left) and said, "Shoot her!"
Posted by walking at 08:09

I remember more than once allowing the door to hit me in the face so my DD would realize. Isn't it funny how the "littlest" thing like opening and closing a door take a lot of intersubjectivity. I also had to work on a similar area. It was learning to take things out of my hand. She tended to snatch things, which to most people seems rude. Rhonda

VERY interesting. We find Woodjie can have excellent joint attention one on one with an adult. But add a few siblings into the room, and it isn't helpful. It isn't even that he focuses on something they are doing... he just loses focus. :[