Iguanas and Morphos and Buses, Oh My!

The day started off with a belly laugh. Steve went to the ATM machine to get $200 in cash. It gave it to him alright . . . in $5 bills! He did not have to go to a special machine with money from the United States. The colón has been the unit and the centavo, the cents since 1892. Salvadorans have been working in the United States and sending money home for so long that the government could not keep exchanging currency. In 2001, the government made our dollar legal tender and everywhere you go you can pay in U.S. currency. It makes travel here quite convenient.

Every once in awhile, Pamela needs down time and today was her day off. Steve and I decided to take advantage of her desire to stay put and went off the beaten path. We drove the Pan-American highway and winded our way through the bumpy roads of Santa Ana, El Salvador's second largest city, which probably has more potholes per capita than any city in the world. Everywhere we saw shops for tires, repairs, and car washes, but we could not find a restaurant anywhere. El Salvador is a place where you don't just go and wing it if you like your meals on time. 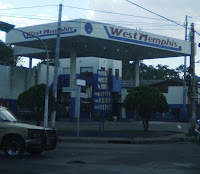 Driving in El Salvador is tricky at best. You often see stop signs at traffic lights. Why? My theory is the signs serve as a backup when power is out. Roads are sometimes one-way but poorly marked. Pedestrians in town do the craziest things. While traffic is flowing, albeit slowly because of the congestion and terrible roads, people throw themselves in between cars. At one stoplight, we saw a man push a car across. One woman pushed a stroller in a mad dash with another child at her side. The grassy medians between the highway serves many purposes. We saw a teethered horse eating grass, a live clown, and a food stand with tables and chairs for diners. On the shoulders of highways were school children walking home, unfenced cows grazing, fruit stand, and furniture for sale. The bravest soul was a woman standing in a gap along a single concrete barrier separating traffic going sixty miles an hour. Steve said many years ago an Italian was driving by one of those and the pedestrian tripped and fell into traffic. The driver could do absolutely nothing to stop in time and killed the man. He stopped and waited for the authorities but everyone told him to go because it wasn't his fault. He stayed and the police arrested him. He ended up paying the family for their suffering and loss. 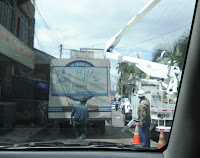 In addition to repainted public school buses, we saw short school buses and cars that looked like bumper cars in El Congo. Some buses had passengers packed like a subway in Tokyo. People sit or stand in the back of pick-up trucks, going full speed down the Salvadoran version of the Interstate. Drivers sometimes overload their trucks, end up crushing the wheels, and block traffic. Occasionally, you see armed guards and soldiers riding all sorts of vehicles. Santa Ana had many soldiers because of the crack-down on gang violence, which is a serious problem. Steve's niece in Guatemala City did not visit as planned because a friend her age and two others were caught in the middle of a crossfire in what is supposed to be a safe part of town. She stayed to attend the funeral. 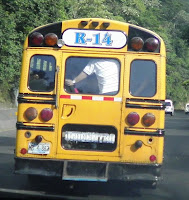 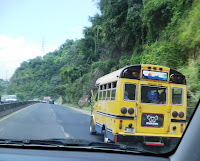 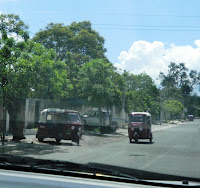 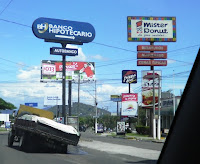 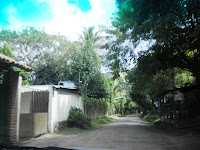 We also drove an arc around Lake Coatepeque. We were in search of a restaurant on the lake with a spectacular view. We found a dirt road that made us very thankful to be in a four-wheel-drive pickup truck. We were not exaclty in the middle of nowhere because Steve could still check his email and, as long as we saw the back walls of lake estates, we knew we were fine. We stopped at one point to snap a picture of an iguana sunning itself. When the road worsened and the land became more undeveloped, we stopped to enjoy the view and turn around. I chased the most beautiful blue morpho butterflies, gently flitting along at a leisurely flap, but they were too fast for my camera. Then, we saw an enornmous white butterfly, which turned out to be a white morpho with a wingspan of five inches. We drove under it and had no luck in capturing it in megabytes. The rugged roads felt like being jostled in a cheap massage chair, definitely not for anyone with back problems. While we never found the restaurant, the view stunned us. 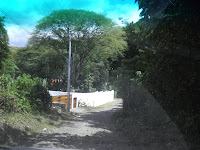 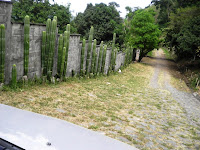 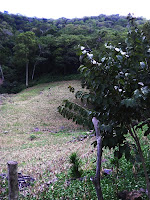 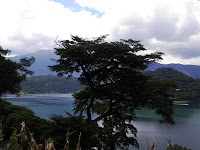 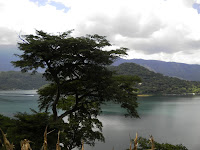 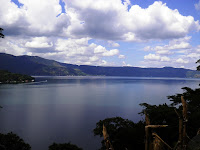 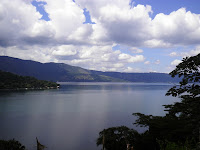 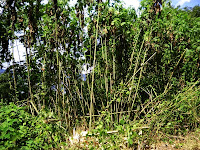 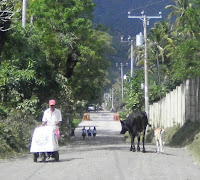 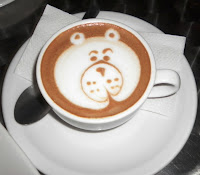 By the time we made it back to San Salvador, Steve and I were starving and our innards felt like jello. Rather than drive through rush-hour traffic with hunger headaches hammering our brains, we stopped at La Gran Via and ate typical food at Inka Peru. We ordered a huge appetizer with meat on a stick, yucca chips, a fried corn flour ball stuffed with cheese, and lightly fried chicken. I ate slowly because I felt nauseous as soon as food hit my stomach. Then, we ate about a third of a delicious meal: steak, rice topped with Spanish onions, fried plantains, and fried yucca. We turned down the bread because the food looked so delicious. We took home a doggie bag and hit a coffee shop before heading home.

Pamela enjoyed her down time and really needed it. Rosa said she did really well all day. Our girl was quite grumpy when we came home and went to bed early. We learned a long time ago to respect Pamela's requests to stop and rest. Pamela did not even feel like greeting her tio Mario Emilio and cousin Mario Alberto, who returned from a business trip to Austria and the Czech Republic. Although she did not appreciate their stories, Steve and I did, especially when we contrasted the orderly regulated society they experienced versus the untamed chaos we witnessed today.

I will close with what one friend calls a wink from God and another calls a whisper from God. Every time I pass this sign I smile because our church is doing a Bible study every Wednesday night. We just started Colossians and we are studying Chapter 1! The sign says, "'Cristio es la imagen visible de Dios,' que es invisible. Colossians 1:15."
Posted by walking at 20:26

Reminds me of Karachi (especially the roads, and strange incidents on the roads!) - only it looks prettier.

I remember driving behind a rickshaw filled with a few goats - and we were counting the heads to see how many goats there were in there, I got to 9 before it made a turn and went away!

El Salvador is a beautiful country. The people are hard-working but very friendly. They provide excellent service and have gone out of their way to make sure Pamela's dietary needs are met. The poverty is crushing in some places, but I have seen a great change since the first time I was here in 1990 when they were in the middle of a civil war.

El Salvador is a beautiful country. The people are hard-working but very friendly. They provide excellent service and have gone out of their way to make sure Pamela's dietary needs are met. The poverty is crushing in some places, but I have seen a great change since the first time I was here in 1990 when they were in the middle of a civil war.