I'm a bit behind in blogging between trying to catch up after the trip and recovering from a lingering gift David gave me when we returned from El Salvador: a nasty head cold and sore throat. Before doing the final post on Joya de Ceren (a beautiful way to finish this series), I want to touch on Pamela and our educational plans post trip.

Pamela did not join us on our forays on the last two days of our trip. She is very good at self-regulating. If she is hungry, she will eat an entire plate of food. If she doesn't have an appetite, she will skip a meal or eat only a couple of bites. If she feels tired, she goes to bed early. If she is cranky, she will stay home rather than put herself in a situation where she will have an ugly meltdown. Some people with autism lack this level of self-awareness, which is why that screaming "brat" at Wal-Mart may very well be an autistic child who had had enough for one day. Pamela probably realized that our day of travel on Wednesday would be exhausting and she needed to rest up to be on her game.

Earlier in the visit, Pamela bonded with Julie's maid Rosa and even spoke to her in Spanish. I regret having not recorded any of their interactions early on. Five days of adventure wiped her out and Pamela was a bit frustrated on day six. Even though you cannot see how many Spanish words she could express, this video clip shows many wonderful things, evidence of how far she has come in her ability to interact with people. The last time we visited El Salvador, Pamela spoke a few words but did not have an ear for Spanish. She had no way of communicating non-verbally, much less expressing herself through facial expressions, gestures, or body language. She never interacted with maids because they spoke no English. RDI has helped her come a long way.

Here are some highlights of what I noticed:

I will add five minutes of Spanish a day, expanding the original to fifteen minutes. I am doing two things: reading the book El Salvador (twice a week) and listening to two new sentences of Blancanieve (Snow White) from an audio CD we picked up there (three times a week). 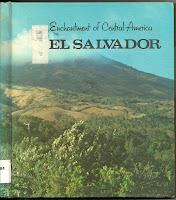 The weekend before our trip, Pamela and I stumbled on this little gem of a book that I mistook for twaddle. El Salvador by Allan Carpenter and Eloise Baker appeared to be one of those dry-as-dust, fact-based social studies books because it was part of a series called Enchantment of Central America. Although dated, the book is far superior to what is on the market today. I searched Amazon and found the only comparable book in which you could peek inside. In the Charlotte Mason world, we debate how to recognize a living book. I will give you a three-question "test" to see how sharp your discernment skills are.

Question 1 - One way to assess whether or not a book is alive is to read the opening sentences. Read A and B. Which one leaves you wanting to continue?

A popular saying in El Salvador advises, in Spanish, El que quiera celeste, que le cueste, meaning, "Whoever wants blue sky has to work for it." The people of this Spanish-speaking country have had to work hard in the face of many challenges. These include a bloody civil war from 1980 to 1992, a wide gap between rich and poor people, and frequent natural disasters.

The cruise ship neared the coast of El Salvador. It was dark, and most of the passengers had just begun eating their late evening meal. A festive buzz of conversation filled the dining room.

Suddenly the captain spoke over the loud speaker. "Ladies and gentlemen, if you will please interrupt your dinners and go on deck, you will see one of the most spectacular sights of this voyage."

Question 2 - Living books reach you emotionally and their ideas stay with you because they are bonded to your feelings. Read A and B. Which one touched your heart?

In the 1960s, El Salvador became a leader in promoting the Alliance for Progress. The United States and Latin American countries used the alliance to speed growth. With foreign loans and U.S. aide, El Salvador's government created new industries. The upper classes benefited from the boom. They no longer relied as much on landowning and coffee growing. With a more progressive attitude, the nations's leaders also sought to meet the needs of its people. Some made efforts to improve housing, education, and health care.

[El Salvador] also participates in the Alliance for Progress. This channel for United States aid to Latin Amercian countries was put into action in El Salvador by U.S. Ambassador Murat Williams. Homes, schools, water and sewage installations, health centers and mobile units have been promoted by the Alianza.

One early Alliance project will be remembered for a long time. When Ambassador Williams was visiting the Army facilities, he was told about a warehouse full of old German rifles and asked to see it. There he saw neatly stacked, unused Mauser rifles. He thought that this was a waste of good material, and the Salvadorans agreed. As a result, the Alliance financed melting down the weapons, and creating construction rods for building schools. Coverting guns into building support rods is a rather modern example of turning "swords into plowshares."

Question 3 - Living books clothe facts in stories. Which version makes the Soccer War sound like a story rather than a dull recitation of facts?

El Salvador's economic growth, however, was not enough to meet the demands of its rapidly growing population. Many people were unable to find work or farmland in their own country. Over the course of several years, about 300,000 Salvadorans emigrated to Honduras, often illegally.

In early 1969, the Honduran government began to speak out against the Salvadoran "invasion" of Honduran territory. Hondurans saw the Salvadorans as an economic threat. Along with land issues, the two countries had long disagreed about their border. The matter became a crisis when Honduras passed laws that would take away the land of illegal immigrants. In response, Salvadoran troops invaded Honduras in July 1969. The ensuing war lasted four days. It left two thousand people dead and four thousand wounded.

For El Salvador, the cost of the brief war was high. The return of emigrants swelled El Salvador's landless class to 41 percent of the rural population. The war also led to the end of the common market.

Perhaps the most outstanding event of Central American history during this decade was "The War of 100 Hours" between El Salvador and Honduras in 1969. This is sometimes erroneously called the "Soccer War," because it was sparked by the soccer championship matches. However, its causes are much deeper and more involved.

For years, citizens of El Salvador had immigrated to and settled in Honduras. Many had become successful businessmen and farmers.

When Honduras passed land reform laws in 1968, Salvadorans were forbidden to own land. Thousands were forced to return to their overcrowded homeland. In Honduras, mobs set fire to Salvadoran homes and attacked many of the Salvadoran residents. Altogether, more than 20,000 Salvadorans left Honduras at the beginning of the conflict. There were many border clashes, and both governments accused the other of many misdoings.

As wars go, the War of 100 Hours was a little more than a skirmish. If any side could be called a winner of the military action, it probably was El Salvador.

And the winner is . . . It should be so obvious which book captures your attention and which would be good reading right before bedtime. I won't insult your intelligence by giving you the answer! I will close with a short clip of our view of Lago Coatepeque on the day we took Mr. Toad's wild ride on the back roads of El Salvador. A reward for those brave souls who made it to the bottom of this post!