Here we all are relaxing before breakfast: Pamela at the computer, me waking up, Steve taking pictures, and Julie's husband Mario Emilio reading the paper. Clearly, we know that Coco is boss in this household! 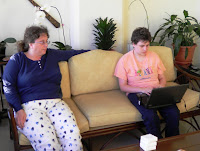 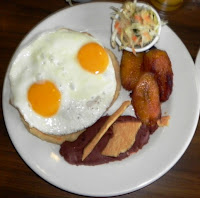 This morning, Pamela, Steve, and I ate un desayuno Salvadoren (a typical Salvadoran breakfast) at San Martin: heuvos, pupusas con cortido, frijoles, y platanos fritos. We always sit inside, rather outside in the middle of the mall, because they bake bread on the premises, an irresistible smell. The place was packed but slowly people left.

Unfortunately, the women at the table next to us did not leave. Even though the restaurant piped music in overhead speakers, one lady decided to entertain us with a music clip from her laptop: "The Little Drummer Boy in Spanish. The singer's high-pitched voice encouraged Pamela to sing "My Boy Lollipop" so that we had three-song party going on over at our table. The laptop defaulted to playing that thirty-second clip over and over and over again. Did they not realize how insipid it sounded once, much less a hundred times? Coming home to a running washing machine and Coco squeezing her squeaky toy while construction workers hammer and drill away in the unfinished apartments in Julie's building was actually pleasant.

We could not help laughing at the ridiculousness of it all. Why? Whenever anything annoying happens while traveling is more fodder for the blog! While driving around today, we saw more unsafe driving and pedestrian antics, including two young men carrying logs across the Pan-American highway. They had to climb over the concrete barrier in the middle with no shoulder nor any margin for error. We decided that the Super Mario Brothers theme music is the perfect accompaniment for Salvadoran traffic. 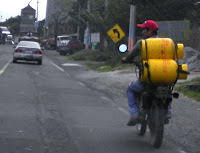 Today was so special I will postone the really interesting pictures until we return home and take time to narrate it all. We meant to go to Tazumal today but ended up at two archaelogical sites: San Andreas and Joya de Cerren (the jewel of the hills).

We did not get to spend as much time with our hosts, Julie and Mario, as we would have liked. Mario got back from Europe last night. Julie has been helping a very dear friend of the family get acclimated after having spent the rainy season here in her other home in San Francisco. They were not able to join us for our last dinner out, so we dined at a little cafe in the Torre Futura, the very tall green building shown in earlier posts. We hooked up with Patty and Javier.

Patty showed up grumpy because of her bad day. She spent three hours getting her hair done and her car, which I affectionally call the death trap, finally did her a favor and died (it was in sorry shape). Pamela quickly cheered her up! First, they promised Pepsi instead of Coca-Cola and then came back offered Sprite instead. Pamela was only mildly displeased. Then, the waiter told her they had no hamburgers. That was it! Pamela gruffly poked him in the arm and screeched, "You have hamburgers! You get it right now! You're making a big mistake!" We laughed so hard once smoothed things out with the waiter. Since we were sitting outdoors, Patty ran over to another restaurant get Pamela a hamburger.

We finished eating and I really wanted dessert. I had not eaten many sweets since arriving and, after seeing live cocoa trees today, had a hankering for chocolate. Pamela was ready to go and began to pitch a fit. We told her we would go after we paid the bill and then I crossed my arms, turned my back to her, and pouted. I told her I was not happy because I did not have a treat. I ignored Pamela.

Then, she amazed me. She found a way to give in without totally losing control. After fussing for a minute, Pamela poked me and said, "You can have it. Let's explore together." I agreed and asked Patty to order dessert for me. Pamela and I walked around the plaza and browsed through a bookstore before heading back to the table. As we were walking, she said, "You defeated me." Clunk! You bet my jaw dropped when I realized how deliberate she was trying to win this battle of wills.

Javier and Patty both told me how much more typical Pamela seems to them. She is aware of things that she used to ignore. When Patty accidentally dropped her fork, Pamela said, "You pick it up!" She pays attention to strangers like when the waiter has forgotten mustard and mayonnaise and she waves her hand and tells them what she needs. She looks at people when they talk to her and communicates more fully. They congratulated us on her progress.
Posted by walking at 13:02

Pamela such a sweetie, I loved reading about her adventures in El Salvador! Makes me want to travel too.