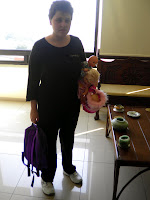 Wednesday morning, a beautiful sunrise greeted us as we packed our luggage. Pamela gathered her babies: she has three now. Tía Patty gave her a new princess baby, which we named Light Princess in honor of the fairy tale by George MacDonald. We arrived at the airport in plenty of time to buy an indigo T-shirt for David and enjoy a cup of coffee. You never know when something will amuse you on the road. This time the Salvadoran elevator music was the source. One song included in a very short rotation was an instrumental Yanni-like version of Blessed Assurance.

A couple of interesting things happened which illustrate how far Pamela has come. The airport in San Salvador added a little wrinkle to boarding an airplane. At the gate, airport personnel had a station set up to inspect the contents of carry-on luggage and give each passenger a brief pat-down. For a moment, I thought Pamela was going to freak out because of her anxiety over anyone touching her purple backpack. She carried her five favorite DVDs in it and nothing else, not even the balsa wood craft kits that Tío Mario gave Pamela and David.

One thing that is tricky about RDI is knowing when to guide versus when to command. One of the goals is to reverse the guide to command ratio because adults tend to fall into an imperative (command-oriented) style of interaction with children in the autism spectrum. Restoring the ratio to something more typical does not mean you never tell the child what to do. The last thing I wanted to happen was for Pamela to freak out and get tagged as a disruptive passenger. I looked her in the eye and sternly told her, "The security guard will look at your purple bag or you are not getting on the plane. Now, knock it off!" Pamela recognizes my "don't mess with mom" attitude and settled down very quickly.

Then I prepared Pamela for the next wrinkle, which was better suited for an RDI style of guiding. While the female guard patted me down, I smiled and looked at Pamela. "Oh, Pamela, this tickles! She is being very careful." Pamela watched and then imitated my posture so that, by the time the female guard was ready to check Pamela, Pamela had her arms up and extended. During the pat down, I stayed in the same position to guide Pamela nonverbally and calmly talked to her about what the guard was doing. She stayed anxiety free during a situation she had never encountered in her many trips.

The rest of the two-leg trip was uneventful. Pamela, a great traveler, handled customs, where we went through a second inspection because we were carrying frozen pupusas, and a three-hour layover in Houston. She did not feel flustered that Steve took a different flight and switched planes in Atlanta. One thing greases the skids is Pamela's babies. People see the babies and catch on very quickly that Pamela requires a gentle touch. It also cracked up the screeners at the X-ray machine, "Oh, no! We're frying babies!"

At one point, Pamela was singing "My Boy Lollipop" to get me to join in her verbal stim. Rather than mindlessly go with her, I turned it around to make a point about her rude behavior from the night before. Pamela was in a very playful mood and I knew I could make a point if I stayed light and playful. She sang, "You are as sweet as candy." I countered, "You are as sour as a sour ball!" She laughed at my variation. Then, I added, "This morning, you are as sweet as candy. Last night, you were a sour ball!" She giggled and said, "No! Sweet as candy!" I replied, "No, you were a sour ball when you didn't want me to have dessert." She smiled, "Sweet as candy!" I concluded, "Okay, when you changed your mind, then you were sweet as candy!"

A Sweet Good-bye Kiss from the Son 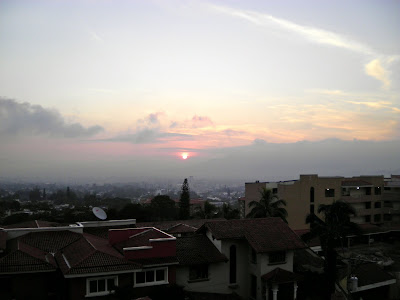 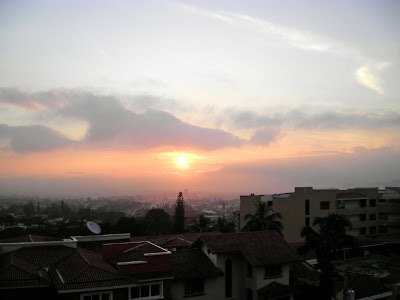 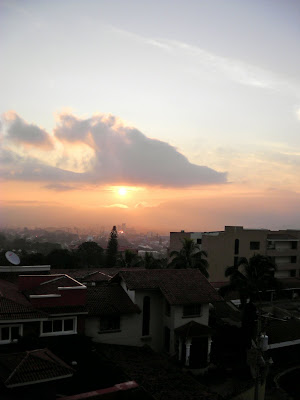 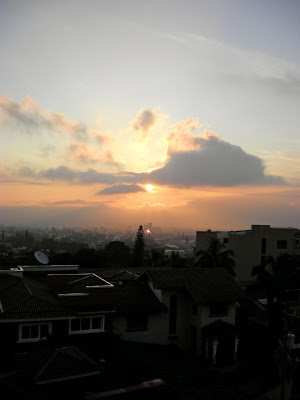 Turner like photos.
I love Pamela's name for her doll!