Adding Fractions with a Graphic Model

I have slowed down the pace of completing Intermediate Math because Pamela is coming across concepts completely new to her that RightStart built into earlier levels. It isn't her fault. What she needs to learn isn't all that hard. It's mainly vocabulary words for concepts that she picks up easily with her pattern-driven mind: classifying triangles as acute/right/obtuse or equilateral/isosceles/scalene, being able to identify parallel versus perpendicular or horizontal versus vertical, knowing what a line of symmetry is and what bisect means, etc.

A person with aphasia struggles with learning new words, so we are spending a month or two going through these ideas at a reasonable pace. That means we will spread out RightStart Intermediate over two whole years. That is okay because I am focused on Pamela and her individual development. Children are born persons, and my goal is to teach Pamela, not to force her into a curriculum. She has already knocked out 45 lessons and all she needs is another 23 to be at the halfway point of its 135 lessons.

A problem with fractions cropped up while working on area and perimeter problems. She started crunching numbers so mindlessly that she confused adding fractions with multiplying fractions. Do you add the denominator, numerator, or both? Do you multiply the denominator, numerator, or both? Many people still confuse these two operations with fractions and turn to their calculators for help. I could have done the same. Or, I could have simply shown her the two different procedures and showered her with worksheets. That is why children in the United States do so poorly in math. We focus too much on memorizing and not enough on understanding. Then, we give up and hand them calculators.

A friend of mine whose son with Asperger's Syndrome is at Cal Tech told me that he had a hard time memorizing procedure. He was fine as long as he understood the concepts. If he forgot the procedure, he could think of a simpler form of the problem and figure out what to do. Pamela had lost touch of the concepts, so we have spent the past three weeks building understanding. First, I focused on addition. Why do we add the numerators only (assuming the denominator is the same)? Did some sicko make up that rule to ruin the lives of elementary school children?

Uh, the answer to that last question is, "No!" 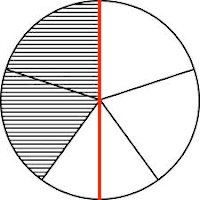 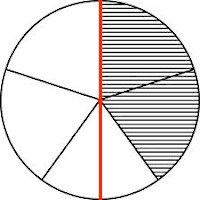 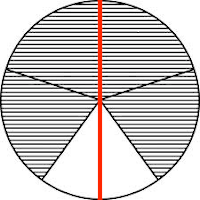 Suppose you are unsure of whether to add denominators, numerators, or both. Try each one and see which makes the makes the most sense:

Scenario 1 - Adding denominators only (the number on bottom) would be 2/10, or 1/5. If you add two positive numbers, you will never get something smaller. That makes no sense!

Scenario 2 - Adding numerators only (the number on top) would yield 4/5, which is just under a whole. That has potential.

Scenario 3 - Adding both would be 4/10, or 2/5. Adding 2/5 to itself would be like doubling it. It makes no sense to double a number and get itself (unless you're talking about 0).

Applying my friend's theory, the one scenario that makes sense would be to add the numerators only. Using reason, we were able to determine that, given the same denominator, adding the numerators is the only logical step. Another logic check would be to think of a real world problem. I cut a pie into 8 pieces. Steve ate 3 pieces, 3/8 of the pie, and David ate 4 pieces, 4/8 of it. That means only one piece is left (1/8), and the menfolk ate almost the whole thing (7/8). The total eaten was 7/8, or 3/8 + 4/8. You could create a visual model, too. The bottom line is that we add the numerators (if the denominators are the same) because it makes sense, not because of some pie-in-the-sky procedure. 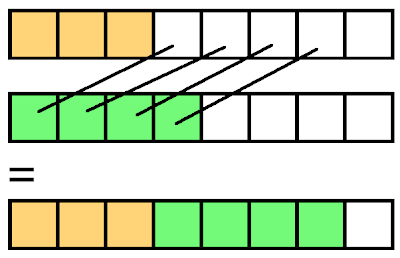 "Heeding the call of the indispensable mathematical principle to always break down a complicated problem into simple components" (Wu pg. 6), we focused on adding small fractions with like denominators. Wu also wrote, "It is good to start with simple fractions that children can visualize, and they should do many such problems, until they have a firm grasp of what they are doing." I gave her picture problems like the one above and had her draw the answer and write the symbols for the solution as illustrated below. 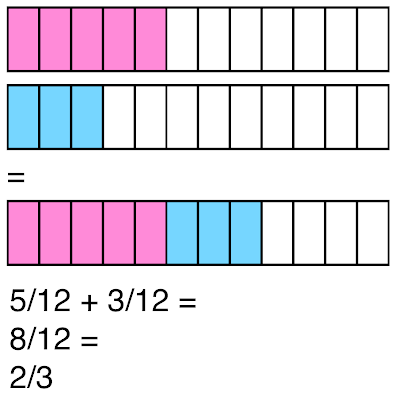 Because of her strong eye for patterns, Pamela figure out to add the numerators only after the first day. We spent another day solidifying that "rule" and then I assigned a combination of problems written in symbols (i.e., numbers, plus signs, and equal signs). Knowing the rule is just as important as understanding the concept because we cannot draw complicated problems. "We should not make students feel that the only problems they can do are those they can visualize. We should explain to them that of course they cannot draw a picture . . . But this does not mean they cannot do the problem! Or that more complex problems like this one are not essential" (Wu pg. 2). Once rules makes sense, they are easier to know, or as Wu puts it, "Children always respond to reason when it is carefully explained to them."

We scaffolded the learning of adding fractions in this way:

In case you struggle with finding a common denominator for 3/4 + 7/8, here it is in pictures: 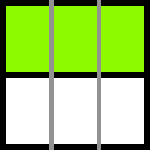 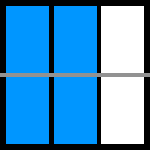 Pamela hasn't mastered the art of finding the least common multiple (or least common denominator or lowest common multiple or lowest common denominator--is there any wonder why kids get confused?). If I introduced it now, she might see it as a pointless exercise. I plan to let her chew on more complicated problems like 11/144 + 17/40 first. Why? I want her to appreciate how wonderful finding the LCM after having experienced the school of hard knocks.

It should be plain to the children (even if they may not be able to articulate it) that this is an efficient compression of a valuable piece of mathematical reasoning into a compact shorthand. They would appreciate this efficiency, let it be noted, only if they have meticulously gone through the laborious process . . . Because young minds are flexible and discerning, the children will learn the algorithm logically . . . they will learn how to reason effectively, and the whole experience will stand them in good stead in their later work. Wu

Now, here's the really cool part for me. Charlotte Mason said these sorts of things a century or so ago:

~ "How is this insight, this exercise of the reasoning powers, to be secured? Engage the child upon little problems within his comprehension from the first."

~ "Arithmetic becomes an elementary mathematical training only in so far as the reason why of every process is clear to the child."

~ "Carefully graduated teaching and daily mental effort on the child's part at this early stage may be the means of developing real mathematical power."

~ "Nothing can be more delightful than the careful analysis of numbers and the beautiful graduation of the work, 'only one difficulty at a time being presented to the mind.'"

~ "The child, who has been allowed to think and not compelled to cram, hails the new study with delight when the due time for it arrives."

~ "Mathematics are delightful to the mind of man which revels in the perception of law, which may even go forth guessing at a new law until it discover that law."
Posted by walking at 13:22

You can sure see your love of math in how you teach it.

Phew Tammy, how wonderful to have such a mathematical mind! Think Nick takes after me in his lack of understanding!!!! ;-)

You are doing a wonderful job of this CM math principle too: "Demonstrate every demonstrable" (Vol. 1, p. 255). Thanks for all the great ideas!