Sweet Moments Treasured in My Heart

Saturday afternoon, Steve and I drove the Chevy to the levee (okay, it was the uncatchy VW) and walked about three miles along the lake. The sun glimmered on the waters, and a gentle breeze cooled us as we headed back to the car. When we returned home, Pamela and I counted birds for the Great Backyard Bird Count. We stood for a half hour at the kitchen window and, although the count was low due to a pesky hog-faced squirrel at the feeder and an evil cat who adopted a neighbor last summer, we enjoyed our quiet time together. Yesterday was our final day for the count. At seeing our last two customers, I broke out into song, "Two mourning doves!" Without missing a beat, Pamela improvised, completely impromptu, "And the cardinals on a bird day!"

Then, the Saturday miracle happened. You might not think of it as miraculous but any family dealing with autism knows one when they see it. Pamela and I headed to the store to pick up some things. She picked out a small bag of chips to go with her burger for dinner. I know I bought the chips. I saw the clerk put them in the bag. I put all the bags in the car. Somehow between the car and the house, the bag of chips disappeared. I don't know where it went. I don't know how it happened but the chips vanished.

While she is mature enough to avoid a full-blown meltdown, we usually cannot avoid tears in such situations. I spent ten minutes looking in all the cabinets, drawers, refrigerator, and car. Pamela remained calm and joined me in the search. I apologized several times while we looked everywhere. When she realized that the chips were gone, she looked over to the gluten-free bread our neighbor picked up for us Friday. She said, "Chips, next time." She quietly opened the bag of bread and fixed her hamburger. Pamela kept herself so well-composed I stopped her after she grabbed two pieces of bread. I hugged her and looked her in the eye. I told her she was so brave and stayed so calm about the chips. I smiled at her, and she smiled back at me and nodded, "Yes!"

Today was another warm, gorgeous day and so many lovely things filled my heart to near bursting. Pamela and I studied in the morning. She flew through math and remembered many details from our readings about the Presidents. Last week, I introduced her to the electoral vote by playing with a spreadsheet about the 2000 presidential election. We looked at the popular vote first which leads you to one conclusion. Then, we went state by state, looking at the results of the popular vote, and assigning electoral candidates. Since Florida was the source of so much controversy, we did that state last. The electoral vote lead to another conclusion, which is the constitutional one.

Today, when Pamela narrated the presidential elections, she told me they were counted by state! Woo hoo! Then, we read the lesson which talked about how Andrew Jackson held the first national convention to pick a candidate for the party. That was something I had forgotten (if I ever learned it in high school). The first one for Jackson's party, the Democrats, occurred in Baltimore, Maryland in 1832.

Before plunging into A Child's History of the World, Pamela told me what she remembered about the Bronze Age. She said, "Caveman had fire. Made copper. No wire. No electricity." I replied, "They didn't make wires. I wonder what they made." She answered, "Hammers. Knives." After reading and narrating, we talked about the map in the book. Pamela made a connection to the Caspian Sea because it reminded her of Prince Caspian.

Our lesson on sculptures was spectacular. Sculptures? Yep!

As always, we recalled what we did last time, which was draw an Assyrian tree of life into a slab of Sculpey clay, which we baked to harden it. To start today's lesson, Pamela made rubbing with crayons. Then, we inked it and tried making stamps. The original drawing was more like a sunken relief sculpture (the one on the right) because she carved into the clay. We made a second slab and made an imprint of it, which turned out to be like a high relief sculpture (the one on the left). But, that was not even the cool part! 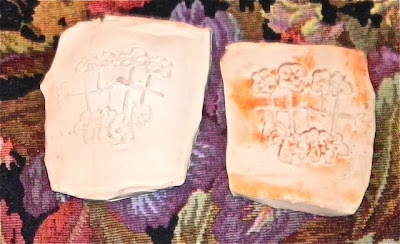 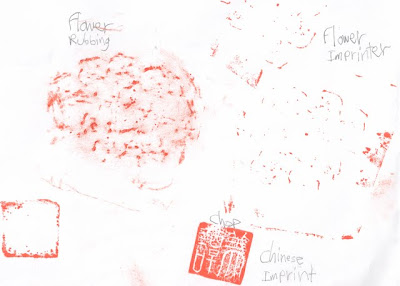 I glanced over the first sentence of the book, which talked about a chop. "Today in Japan and China, artists sign their names with a stamp made of carved stone called a chop." Suddenly, I realized that we have a couple of them in our house! Whenever Steve travels overseas on business, he always picks up interesting objects. On one trip, he brought home some chops. I sprung off the couch and grabbed one. We inked it up and stamped the paper. I told Steve about what happened later on and we both had a good laugh. When we were in the Navy, senior officers had to put their chop on paperwork, which meant they had to initial it--the Captain in green and the Executive Officer in red. We had no idea the term's origin was connected to the Chinese stamps in our office! If that wasn't enough, the reading ends with talking about different museums in which you can find Assyrian sculpture--one is located in Baltimore (a connection to our reading on the Presidents)!

The rest of the morning went smoothly. Pamela had another surprise for me. When we sang "El Coqui" in Spanish, Pamela harmonized! Since it is a very short song and we are still learning the lyrics, we repeated it a few times. Every time we sang it, Pamela sang a third above the melody. She has never done that before, and I just loved it!

We ate lunch with some homeschooling friends who are interested in Charlotte Mason's ideas. They asked me to do a "show and tell" to give them a glimpse of how we do things. We sat at umbrella tables in an outdoor patio out back and the children who came enjoyed playing together. As we talked, we soaked up the sunshine and fresh air. Afterwards, as we began to chat about how we all met one by one in unusual ways for a small town, we realized that only the hand of God could make such a meeting possible. So many disconnected threads all woven in such a beautiful way. I have been hoping to become involved with a local study group for the past ten years, and it looks like this one has fallen into my lap. Suddenly, I felt very loved and cherished by my Father in heaven.


‎"The world is perishing for lack of the knowledge of God and the Church is famishing for want of His Presence. The instant cure of most of our religious ills would be to enter the Presence in spiritual experience, to become suddenly aware that we are in God and that God is in us. This would lift us out of our pitiful narrowness and cause our hearts to be enlarged." ~ A. W. Tozer

Love the Tozer quote and what you felt from your heavenly Father.

Have you read Ann Voskamp's book yet?

I have not read it Ann Voskamp's book yet. Too many books. Too little time! :-)