Copper and Other Things in Context

Science lessons have been quite sweet lately, even though some demonstrations (trying to create static electricity sparks on a door knob) fail. One of my Charlotte Mason friends helped me to see that scientific explorations should flow out of the books we are reading. I am finding them especially powerful in building a context for material in the books, especially when I focus on doing guided participation where I give Pamela opportunities to observe, think, and share. 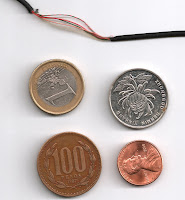 Pamela is reading about making a better cable as Field and his compatriots plan to lay the first telegraph cable across the Atlantic Ocean. Since I wasn't sure about what she knew about metals, I stripped the coating off ear bud wires so she could see copper wires for herself. At first, Pamela freaked out when I gently cut into the coating. Because she feeds off emotions around her, I stayed calm and neutral and paused until she got a grip. Then, I quietly told her they were already broken. She quickly settled down and watched what I was doing very intently.

The video illustrates what sharing joint attention looks like. She shifts attention to what I'm doing without any prompting because she is naturally interested in what we are doing. When I move the trash can, she coordinates her actions with mine very smoothly. When I am getting close to pulling off the coating, Pamela smiles in anticipation. She expects to see wires and chips in her own comments like "Wire" and "Got it!" She managed to tie in her favorite topic (ancient history) into our task. She tells me what she observes when we finally peek at the wires. I was quite surprised to find color-coded wires in addition to the copper wire.

The teachable moment is looking at something very familiar (coins including those from other nations for variety) and searching for the coin made out of copper. I hope she can tie in a known (pennies) to an unknown (copper metal). At first she didn't understand the task and, once she understands she is supposed to match the metal, she takes an active part in searching for the right coin. I scaffold the ability to see the color by placing the copper wire against a blank index card.After we explored copper wire, Pamela asked to read A Child's History of the World. One would think that ancient history has nothing to do with copper wires and coins. Wrong! We were in the middle of the chapter on the Bronze Age and the very first idea covered was Stone Age man's discovery of copper, "Now, it happened that this particular rock was not ordinary rock but what we now call 'ore,' for it had copper in it. The heat of the fire melted some of the copper out of the rock, and it ran out on the ground." I would love to tell you that I am so well organized that I planned this. I did not. The beauty of a living books curriculum is unintentional connections that seem to flow out of nowhere.

We are also reading a biography about Alexander Graham Bell, so we explored the propagation of sound. First, I stretched a rubber band around a plastic cup. She plucked it and I plucked it. We talked about how the rubber band moves after it is plucked and, when it stops, you hear no more "music" as Pamela called it. Then, I plucked it and put my finger on it to stop the sound abruptly. After that, I stretched the rubber band tightly and Pamela plucked away. Suddenly, she said, "It's fast!" I replied, "Yes, high sounds go with fast waves." Then I said, "Let's see what happens when you stretch it loosely." She watched and said, "Slow." I confirmed the connection between low sounds and slow waves. That was a VERY COOL science moment for she made that discovery on her own and thought it important enough to tell me--a true sign of experience sharing. 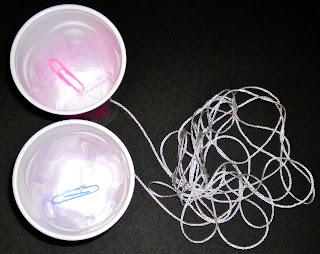 Then, we built a string telephone. Since I found it hard to pierce the disposable cups, I did that for her. I cut a very long piece of string. I took one cup and waited for her to take the other. I grabbed one end of the string and she grabbed the other. As soon as I started poking the string in my cup's hold, she did the same. She copied me for the rest of the set-up: we pulled the string out of the cup and tied it to a paper clip.

We stood up and walked in opposite directions. To create a contrast, we first tried it with the string on the floor. We tested the string telephone phone (I talked and Pamela listened) with the string touching the ground. She told me, "It's broke!" Then we tried it with the string hanging loosely and she again said, "It's broke!" By now, Pamela looked at me like I was crazy. She was probably thinking, "Not another experimental dud." When we pulled the string tightly and I talked, Pamela didn't even have to report the results. A huge smile broke out on her face and I knew the phone was up and running! We talked some more and I had her observe what the string was doing while we talked, tying into the rubber band explorations. Then, I talked to her some more and pinched the string. Pamela said, "It stopped!"

We have also been reading a book about weather and, last week, we covered lightning. Since I didn't expect God to hit us with a thunderstorm in the middle of winter, we watched some videos of lightning on you-tube: a tree getting struck by lightning, tower being hit multiple times, and tree catching fire. When we read the passages on what to do during a thunderstorm, those vivid images gave Pamela context for the readings and her narrations were solid. We used this video to count the seconds between lightning and thunder before we read a passage on estimating distances. Our work earlier in the year on setting up circuits with batteries introduced Pamela to the idea that electricity involves positive and negative charges, so, when she copied this diagram from one of her books, it made sense to her. 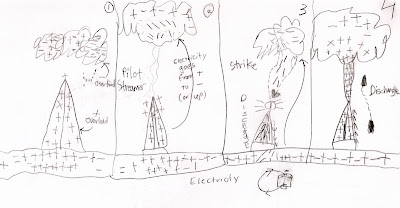 Email ThisBlogThis!Share to TwitterShare to FacebookShare to Pinterest
Labels: science

Goodness me Tammy, can I send Nick to live in your house............. he would certainly get a wonderful (mindful) education :) It is always interesting to read what you and Pamela are up to!

I'm so inspired about what ya'll are accomplishing. I've refocused on what I am doing with my oldest. Thanks again!

Di, we do stick by our "wide and varied" curriculum around here, no doubt about it!

Linda, so glad to be of help. It's never easy figuring out what to do with our older kids.

I watched the video a few times, but didnt get time to leave a comment. I just love it (not to mention how adorable Pamela is) but just the things you guys study gives me so much inspiration.
GO Aut-2B-Home GO!

She did something really cool last night that I will have to blog!!!! :-)

Pamela is ALWAYS learning something! Have you looked back at all she has accomplished recently? I will be happy with full sentences here. :)

Charlotte Mason had a great "test" of what makes a lesson. Every lesson ought to furnish at least one new idea (even if it is one we didn't anticipate). A lesson lacking in ideas is not worth doing!