**RDI** Last night, Steve was impressed when Pamela started shaking and nodding her head appropriately in a conversation they were having about our plans for Saturday. He had never seen her do that and was not aware I was emphasizing that skill. That tells me she is generalizing well!

Begin to think about the concept of productive uncertainty, which really means, acting in unexpected ways from time to time, doing the silly or goofy or 'wrong' thing to create moments of pleasant surprise and an opportunity for facial gazing, a self directed desire to look at someone’s face to share pleasure or to get more information. You can have an OOPS! moment or a OH! SILLY MOMMY moment or Uh Oh! that's not what I meant! moment together.

While playing hot potato, David casually tossed his ball cap to me, and I put it on my head. Pamela laughed, and the game continued. I tossed the cap to her, and she put it on her head, backwards. What I found odd was that she had trouble keeping focused on the game and spaced out a bit until she removed the hat and threw it back to David. Neither one of them knew it, but I had hatched my own moment of uncertainty. I had tucked two packs of cards into my back pants pockets and, in the middle of an intense ball toss, suddenly launched the cards at both of them, simultaneously. David thought it was hilarious, and Pamela laughed, but started to worry, "What a mess! Pick up the cards!" We managed to play ball with the cards sprawled on the floor. Pamela had a hard time resisting the urge to gather up cards during pauses in the ball game (like when David or I missed a catch).

Pamela seemed to be vying for sympathy today. She has never fussed about being hurt; in fact, she avoids admitting physical setbacks of any kind until the truth of a cold is undeniable. She had a miniscule cut on her finger (at first, I thought she was pretending). She told me she was getting a bandage and, during the day, I made a special effort to kiss her boo-boo. Later, she walked around with a dishtowel on her eye and told me she had a rash. I told her I was sorry and gave her sympathy for that too, but did not see one hint of a rash.

I ought to mention I am continuing on RDI habits like declarative language, nonverbal communication, exaggerated facial expressions, unexpected sounds to get her to reference me, etc. I deliberately walk into the room where she watches television, just to encourage her to shift her attention from the show to me. Then, I tell her what I am doing or make some kind of statement. She is doing much better at referencing me now, even with the one-eyed monster competing against me. Today, Pamela helped me fold sheets, towels, and napkins and put away the dishes.

**Math** I have struggled with teaching Pamela proportions for two weeks. I grabbed the Math-U-See blocks from David's algebra program and made up some problems in Excel. On the second day, she started solving for the missing number in one proportion, given another, without blocks! Yahoo! When in doubt, go concrete. 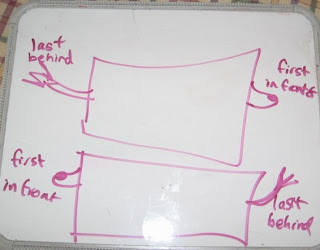 **Language** I had to take one more step to nail the difference between in front of and behind from a side view. I am not sure why, but this simplified illustration I used on Tuesday did the trick. She was finally able to whip through a busy page like the one below, flawlessly. Yesterday and today, we went back to Garth Williams illustrations to generalize side views. 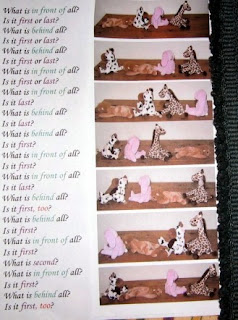