Scaffolding and Differentiating First versus Last 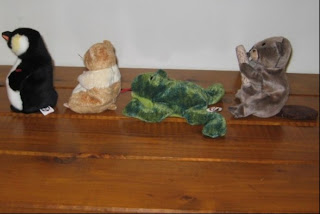 Here is an example of how I taught Pamela to differentiate first versus last from a side view. Pamela has a difficult time deciding which animal is first or last and basically guesses! I tried demonstrating how the animal with its nose on the outside is first and its tail on the outside is last, but Pamela was still confused when I mixed up the animals and/or flipped them in the other direction. 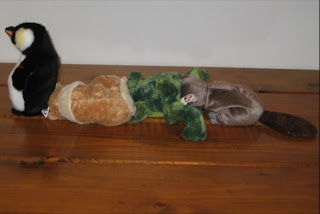 At this point, I began thinking about how to scaffold this by simplifying the elements. I pushed together all the animals to make the penguin's beak and the beaver's tail more prominent. But, Pamela continued to be confused with successive trials. 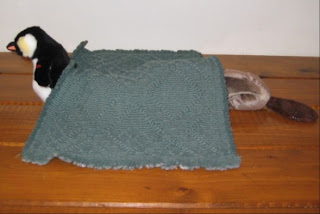 My final step worked! I covered up all the animals with a placemat, leaving only the penguin's beak and the beaver's tail uncovered. The mat made it so obvious that Pamela had no trouble picking first and last. We did some trials with the placemat and she picked correct animals for first and last every time. Then, I tried some trials without the placement, and she clearly understood! I plan to spend one more week on this because I want to make sure she remembers this from day to day.
Posted by walking at 08:39