Scaffolding and the Cutting Edge 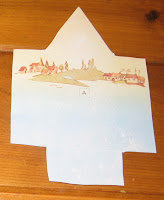 In Chapter 2 of Awakening Children's Minds, Laura Berk discusses scaffolding as a way to help children in mastering new areas of competence. Today, we had a great example of how this works. Pamela finds cutting anything short or curved a challenge. We have been making toys from The Toymaker to practice cutting (among other things). Today, we cut out the Christmas angel box. When we started RDI, Pamela could handle simple cutting tasks that were straight and long. She was not very good at corners, short snips, and curves. She tried to cut curves with shorter straight cuts. She cut this piece all by herself today, a task she can do independently because it had all straight lines and right-angle corners. I assisted by cleaning up a couple of corners--the last skill she needs to learn for cutting corners.

When it comes to cutting, we have a shared understanding that Pamela will cut as much as she can by herself and I will cut the tricky parts. She got this far when she recognized the short, tight cuts in the roof were too hard. She told me, "Help me with this." I cut only the parts that were challenging and encouraged her to keep cutting.

She reached another tight, tricky corner near the floor of the house. I left one little triangle for her to snip and asked her if she could do it. She said she could and finished cutting the rest all on her own.

As you can see she had a couple of snags that were minor, so I cleaned it up for her. Her cutting has improved over the past couple of months, and I did not think it was worth drawing her attention to it since I had bigger plans in mind.

She did not know where to begin with the angel and handed me the entire piece, uncut. I decided to cut the inner part of the wings and section between the head and wings. I thought she could do the stand all by herself, and I would use the long curve edge of the wings to demonstrate how to cut curves. I filmed us cutting the angel: first, I told her I thought she could do the straight edges and she agreed. Then, we talked about how you cut with the cutting hand and you turn with the turning hand (she is left handed, so I wanted to avoid left versus right).

The second clip shows the curved cuts. This is the first time Pamela has ever successfully turned a paper while cutting a curve! You can see how pleased I am by the smile on my face!


The first technique of scaffolding I used was joint problem solving aimed at keeping Pamela in the zone of proximal development. I broke down the task into three parts: the interior, which I would cut; the straight stand, which Pamela would cut; and the long curves, which I would show Pamela how to cut. I provided very little direction in the straight cuts because she has mastered that skill. I provided detailed direction on the long curve because had never been able to do it before unless I held the paper and turned it for her. Since I knew cutting curves was at the edge of the zone, I moved in closer to narrow the zone of connection between us. I had to give her a little "tu" sound to help her think of the word, turning, which I was trying to spotlight. I also repositioned the paper to maximize success for her.

The second technique of scaffolding I used was self-regulation, or "the capacity to use thought to guide behavior" (page 49). Pamela and I talked about what my cutting hand was doing versus what my holding hand was doing. You can tell she put this new way of thinking about cutting curves into action. She made three of four curved cuts by turning the paper today. In my opinion, this is the major difference between behavioral techniques and RDI. The former focuses on changing the environment or finding ways to shape behavior; the latter focuses on thinking in new ways so that the person makes better informed behavioral choices:


In scaffolding, the adult encourages the child to grapple with questions and problems, and, thereby, to contribute significantly to the dialogue. . . The parent or teacher intervenes only when the child is truly stuck, granting the child as much opportunity to master his or her own behavior as possible. . . When adults ask children questions and make suggestions that permit them to participate in the discovery of solutions, then transfer of useful strategies to the child is maximized. by introducing language as a mediator of the child's activity, the adult's questions and prompts prevent the child from responding impulsively. They encourage the child to step back from the immediate situation and consider alternatives--in essence, to think (pages 49-50).

The third technique of scaffolding is what I covered in another blog post: warm parenting.

Of course, I cannot help but close with some Charlotte Mason musings. I think she instinctively understood the idea of scaffolding. For example, when teaching children under six outdoor geography, she encouraged parents to break it down into many little steps and to engage children in conversations about what they observe and concepts of geography. Children could learn to think of a duck-pond as an island sea, a hill as a mountain, and a brook as a mighty river. To prepare them for map reading when older, she broke down directions and distances: talk about observing the sun's movement and time, observing the sun and compass directions, paces and distance, time of a walk and distance, direction different windows in the house and other buildings face, the connection between wind direction and weather, the compass and directions, measuring boundaries (property boundaries, building dimensions) by pacing, making their own plans of their house, their property, the block in which they live, the neighborhood, etc. You can read her ideas on outdoor geography here.
Posted by walking at 13:25

Email ThisBlogThis!Share to TwitterShare to FacebookShare to Pinterest
Labels: scaffolding

So neat the discoveries you are both making about what Pamela can do!! Very Cool!

gonna read this in detail later but finally looking at Tmaker site. Are there directions for the activities...i keep pulling up things to cut out but not sure how to put together?

Just had a chance to read. great scaffolding...and explaining of scaffolding:)

Wonderful posts. We have been having computer problems. Frustrating! How do you help Pamela with her hyperfocus? You are such a MENTOR to me. Thank you. sincerely,dianeG.

The directions are not as always as clear as I would like, but it certainly adds an element of productive uncertainty and, if all else fails, good enough thinking.

Hyperfocus is a double-edged sword. Being more relational in our interactions does help her become less hyperfocused, but it is also a blessing when she is trying to master something difficult. I do find the harder something is for her, the more hyperfocused she becomes, which is why scaffolding can help reduce some of that!