Thankful for the Association Method!

I have some BIG NEWS to share about speech therapy ala the association method. But, first, I will share a quick recap!

A few weeks ago, we reviewed 131 irregular verbs for simple past tense and mastered simple past tense questions containing the word did. She knows 79 irregular verbs for simple past tense. Of the ones she missed, she knows seven by sound but spelled them incorrectly. That means we can slowly work through the 52 remaining verbs at our leisure because she knows enough to move onto present progressive tense. My idea is to start with the seven misspelled verbs and lump them in with ones she can spell. For example, she wrote layd but wrote said and paid. That will be an easy fix. When I write up the next batch of studied dictation, I plan to find quotations using irregular verbs she misspelled.

Guess what! After years and years of failure, Pamela has caught onto present progressive tense with ease! Back in 1994, I bought Laureate's all seven Micro-LADS and Early Emerging Rules. In 1996, I started drilling her with a hand-me-down program from Pamela's last teacher (Vocabulary, Articulation, and Syntax Training Program cards), a visual way to practice sentences with varying syntax, including verb endings. In 1998, I made color-coded charts for the different verb endings that go with tense and started drilling sentence patterns ala Teach Me Language.

We did a combination of all of these things off and on with very little measurable improvement for about eight years until we came across the answer to our prayers. Yes, I can safely say that the association method is THE ANSWER TO OUR PRAYERS when it comes to syntax. Why? I can remember working with Pamela's present progressive tense during her elementary homeschool years. All of the drilling and diligent practice never amounted to much and no matter how hard we worked she would still say things like "dog is run" or "dog running" as a complete sentence. She continued to do this until we started focusing upon simple present tense back in May.

About three years ago, we started doing the association method. One thing I knew is that, if Pamela could finally get present progressive tense straight, then I would know without a doubt that it was working! It has taken three years of working through the varies levels of syntax and stories (see page 9) to reach this goal. But, in two weeks of teaching, she has finally nailed it! 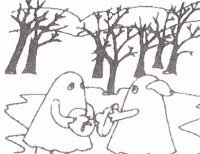 Each of ten reading primers from the syntax-controlled Reading Milestones program has six stories. I always have Pamela narrate in writing her favorite story. We just finished Level 02 Reader 05. This time she chose a story about Dee and Boo, two-costumed characters that appear in some of the stories. She wrote this story without any help or correction from me. Look at her beautiful use of present progressive tense! In days long gone, she would not have been this accurate even with an example in front of her because she just could not process language in this way!

The true test is for syntax to generalize into every day conversation. Present progressive tense is already emerging with accuracy!!!!!!

Yesterday, for both RDI and generalization of speech therapy, I got out twelve pictures card for the three little bears story that I found at Hearing Journey. (It was a weekly activity that is no longer available.) She put them in order, and then we took turns retelling the story. The video clip is six minutes long and, in those six minutes, I only needed to remind her to use full sentences four times. The following is a transcript of all of the sentences she used!

She had NO slip-ups the two times when she used present progressive tense. I know she jumps around from one tense to another but look how well she puts words together! This was NOT possible before the association method and would have only happened in one sentence by sheer luck, much less nineteen sentences. I also love how she added little touches when I asked her questions, adding "I said" for emphasis or responding with "That's right." And, at the very end of her retelling, Pamela gives my hope for the future by saying "The goldilocks will run" for I have not formally taught future tense!

Some bears are eating some breakfast.
The family goes to the woods.
The girl goes to a house.
The girls go inside, see some breakfast.
It’s cold porridge; eat cold porridge.
She sat on the hard chair.
She sat on the soft chair.
She sat on the old chair.
She said, "Too hard! Too little! The bed is great!"
Goldilocks slept in the bed.
The porridge is gone.
Baby Bear feels sad because the porridge is gone.
I saw a broken chair.
A baby bear cries because the chair is broken.
Goldilocks is sleeping.
Baby bear is angry, "Get out of here!"
The girl felt scared.
She is frightened.
The goldilocks will run away.

In case you are really bored and are not in the midst of baking turkey, pie, mashed potatoes, etc., this video clip is one reason why I am so very thankful this year:

Pamela is making wonderful progress!
She is so attentive and expressive too!

Tammy, I hope your family had a wonderful Thanksgiving!!! Pamela is doing so good. You should get Best Home School Mom of the Year award for all your hard work!!!

I'm so glad for you and that Lord brought you what you needed. You are a great mom!

Thanks all!!! I must say that Pamela must be nominated for Most Perseverent Homeschooler of the year before I could accept any award. She is the true inspiration behind it all!

Taffy, I have lost track of your blog!