Steve's mother will turn eighty next February. Since all of her children, nieces, nephews, and grandchildren attended the wedding, we held a pre-birthday bash at the Sun Ray Grill in the Warehouse District of New Orleans. Steve's mother and father are incredible because they still have enough get up and go to dance on stage at the wedding reception the night before this celebration. We look forward to sharing many more birthdays with them in the years to come. Below is a photobucket and video of the celebration, followed by a very prestigious award won by the official dance king of the wedding reception. 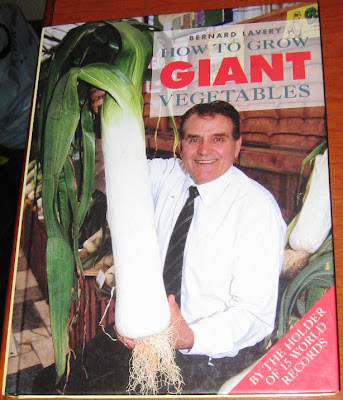 It goes without saying that everyone loves Pamela, and she is a favorite with the Glasers. David astonished them with his height and asked if we sprinkled Miracle-Gro on his head. He towers over all but one of his cousins! They must think we can transfer our ability to grow a giant kid to the garden because someone gave us this book about growing super vegetables. As I have a black thumb in both the kitchen and garden and Steve's porch ferns look luscious, he will be the one to grow super veggies.

And, now, our very important announcement of the winner of the Dance King contest. But first, you need a little background. The Glasers have many talents, and, while singing is not one of them, they are excellent dancers. They lived in Central America for many years (and some of the Glasers still do) and know how to keep time with a Latin beat. David has never joined in on dancing because he was a tender (and short) lad of twelve at the last bash we attended. After Pamela and I had retired to the safety of our hotel room and collapsed in a head-cold haze, David decided to hang out at the reception. Steve felt pity on Pamela and I and hung out with us. Suddenly, we receive an urgent call from his sisters. "Stevie, you have to see David! You didn't tell us he could dance! He's got moves we've never seen!"

David never told us he could dance either. . . So, while Pamela was the Princess of the Programs, David was King of the Dance! The next day someone tossed one of the Glasers these beads. In New Orleans, you don't need a reason for beads--any excuse will do. They thought it would make the perfect impromptu spontaneous award for the dance king.

David gave an encore performance with Tia Julia before and after receiving this award. Tia Janet pronounced him the winner. Enjoy!

Your extended family looks like they are SO much fun to be around! Are they open to adopting a family of 5? :)