The Second Unit's Next Five Sentences and Questions (Part III)

Today, I will follow up on the introduction to the second unit of language and thoughts on RDI and the association method with the five remaining repetitive sentences and questions. To quickly recap the earlier post, I covered the first sentence (This is a/an/some _____) and question (What is this?) and the steps used to cover them.

The next sentence I taught was (I see a/an/some _____). Because Pamela had already learned the difference between the three articles (a/an/some), we did not spend any extra time on them. I wrote "see" in green to attract her attention to the new syntax. I also took pictures of Pamela pointing to the object to emphasize that she was the subject (I) and she was in the act of seeing the object. We had not worked on eye gaze at that time, and I remember finding it difficult to get her to look at the object and pose for the camera. Notice that the first two sentences I taught were declarative in nature because the speaker states something about an object. (Click the pictures for a better view.)

As before, I taught the question that goes with the sentence next: "What do you see?" and then alternate randomly between the two sentence/questions to make sure Pamela knew which sentence answered which question. We also practiced this playing games and in real life to make sure Pamela understood the context in which to apply them. 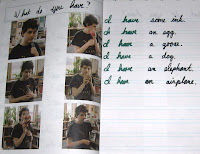 The next sentence we covered was similar to the second: I have a/an/some _____. Again, we color code the verb "have" because it is the new word of interest. I purposely had Pamela hold each object when I took these pictures to emphasize the difference between seeing and having. After we taught the question "What do you have?" we went back to alternating between the three sentence-question pairs and being sure to use all three in games and real life. 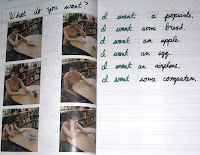 The fourth sentence we covered was similar to the second and third: I want a/an/some _____. The verb "want" is green, and I had Pamela reach out to the object of desire to emphasize the meaning of the verb. After we taught the question "What do you want?" we went back to review all four pairs and using them beyond therapy time. 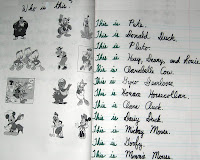 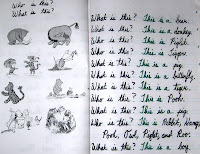 Then, I switched gears and focused on names of people and characters instead of nouns "This is _____" to go with "Who is this?" I remember this "little" change threw a few curve balls, which Pamela overcame after a few weeks (yes, weeks): (1) remember when to use articles and (2) when to ask "who" versus "what" questions. Her difficulty with these minor alterations in syntax confirmed my suspicions that she had syntactic aphasia. 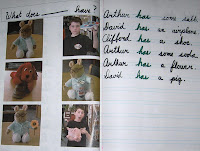 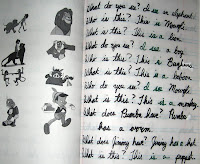 Pamela found the next question much easier because there were no articles to trip her up: "_____ has a/an/some _____" and "What does _____ have?" She was so used to using "I" in sentences and "you" in questions, she had no problem substituting these pronouns with the name of a person. However, she struggled a bit with "has" versus "have." To you, it may seem minor, but children with aphasia are extremely poor guessers and they usually guess wrong! So, a little difference in the last sound of a word was huge and took another week or two for her to nail.

Up until this point, all sentences and questions were in the present tense. We finally reached the first past tense one, and, believe it or not, it threw Pamela for a loop: "I saw a/an/some _____" and "What did you see?" I forget how long Pamela needed to nail the sentence and question down, but it took quite some time to remember which words went with which tense!

Last month, something interesting happened. Pamela's skeeter bites were driving her nuts. We were working on expressive imperative and declarative gestures, but she was so distracted that she stimmed up a storm AND fell back on the six repetitive sentences that she learned five years ago! Here is the clip:

Tammy, they should have you rewrite the manual. You have a way of making it SO much more clear, IMO. Thank you!!!

Jamberry, I think I read that manual about twenty times. It is definitely not light reading! I guess you can thank Charlotte Mason for brushing up my reading comprehension.

i am unable to find the manual for association method.help???

You can find old versions of the book used online. If you can try to get the 2000 editions. It appears they have updated the manual. This new version is revised and expanded and is sold only at the USM Barnes and Nobles store: "Oral and Written Communication Disorders" by Maureen Martin, ISBN 9780983429333. I am not sure if they ship because it is for classes taught at USM. You should probably contact the store first. Here is a link to the book: http://usm.bncollege.com/webapp/wcs/stores/servlet/BNCB_TextbookDetailView?catalogId=10001&storeId=13556&langId=-1&productId=650009343773&sectionId=56987351&partNumber=&item=N&displayStoreId=13556#

Rupa, check out the videos in my latest post on picture study. Two things made this happen: a combination of Relationship Development Intervention and the Association Method.

Imagine a person in their late teens and early adult years making HUGE gains in receptive and expressive language!