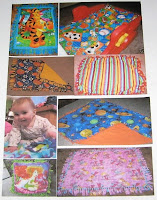 Not everything goes as smoothly as I hope, and Tuesday was a case in point. I wanted to give Pamela a preview of my plans for her to make "no sew" tied reversible fleece blankets. I copied a bunch of pictures off the Internet and put them on two pages for us to review. To strengthen episodic memory, it can help to spotlight various stages of an activity. My objective was two-fold: do the preview and see what gestures Pamela makes in casual conversation.

The problem was that Pamela was itchy from her skeeter bites. She was very distracted and stimming up a storm. While she used some echolalia productively and appropriately "Please stand by," "Cut," "Don't say that," and "Don't do that to me again," she blurted out some off the wall stuff: "Maizie," "Yes or no," "Director," "It's to be announced," "Big bad wolf," and "Rollercoaster." She even reverted back to the earliest syntax she first learned when we started the association method: "I saw a . . ." and "I have a . . ." It is interesting that her syntax feel apart when she felt confused.

I did see some positive things. Even thought Pamela did not want to engage, she trusted me enough to hang in there. She did use some declarative language in the midst of all that stimming. She told me, "I don't feel so good." and used "we" language when she suggested, "Let's go somewhere else." When she was confused, she said, "It's stucked," and I think she meant, "I'm stuck." She also used lots of single nouns and "this" when a word escaped her.

Her nonverbals were there, too. Pamela paid very close attention to me when I looked at her and made sounds. Sometimes, she nodded or raised her eyebrows. She caught on right away when I was using eye gaze to give her a clue about making a blanket for her babies for she asked, "What?" and then started naming things in her room. She hit her leg to show frustration when she saw the dog in the room, scolded the dog, and shifted right back to joint attention with me. She also did that when she was mad at me! I ignored her, so she tapped me for attention. She used several gestures: point, hitting her leg gently, grabbing the page to tell me to turn it, cut with her fingers when she read the instruction about cutting, and poking me. These were all natural gestures that I did not pull out of her or demand.

I had hoped she might immediately figure out my idea about making blankets for her babies. She did not. First, I pointed to the babies. That did not work. Then, I started looking at the pictures. That did not work. So, I asked, "I wonder which one baby David would like." Then she caught on.

When we read the directions and talked about what we had on hand, I had hoped she might immediately figure out shopping for cloth over the weekend. She did not. I said, "When we go shopping," and paused. She did not react, so I added, "What could we do on Saturday?" I tried sticking with declarative, but I had to ask questions because she wasn't tracking. I ended up giving lots of explanation at the very end, rather than dragging it out, because I thought it would have pushed her patience too much.

The very next day, Wednesday, we had a lovely conversation: Pamela was not itchy and was much more engaged.


Objective:
I want us to have a conversation that is not an obvious RDI thing to see what gestures arise. We are talking about two emails Janet and Alyson sent to her.

Overall Impression:
Pamela struggled much less than yesterday and you could tell by her quick thinking! She followed my nonverbals well!

What Worked:
Pamela had no idea what was in my hand. She started off with one of her stims, "New York," and I went with it. I figured I could nonverbally guide her into guessing Louisiana. I was really shocked that it worked so well! :-) Immediately, she thought of the wedding. Again, she used some declarative language about her cousin, aunt, and her princess attire.

Pamela paid very close attention to me when I looked at her and made sounds. Sometimes, she nodded or raised her eyebrows. She was much more engaged with me than yesterday.

When she changed gears from wanting to bake a cake to shopping at Piggly Wiggly, I played dumb. She did follow my nonverbals and got a little annoyed with me. She grimaced once at me in frustration, so I pointed. Right away, she poked me and then adjusted my chin! I have never seen her do that. That would be expressive imperative because she is telling me not to pout!

She used the following gestures: point, pointing to herself, poking me, adjusting my chin, and slight frustration flaps. These were all natural gestures that I did not pull out of her or demand. There was one gesture that I felt I demanded: pointing to her teeth.

My bottomline conclusion is to agree with something Dr. Gutstein said at a breakfast for my consultant and parents in her practice. Self-stimulation is a secondary issue, and, as the brain organizes, it usually goes away. In Pamela's case, physical discomfort or illness distracts her brain and her verbal stims increase!
Posted by walking at 07:23