The Second Unit of Language of the Association Method Part I

Last month, I gave an overview of the association method and a description of the first unit of language. Today, I will follow up with introducing the six repetitive sentences and questions taught at the beginning of the second unit of language. If you find you have no clue about what I am explaining, you might want to read the overview and first unit posts first! If you are dying to know more NOW, this long pdf summarizes and condenses the method. The manual itself is only $52, and, when I reflect back on all of the speech therapy materials and manuals I have bought in the past seventeen years, this book was the best investment I ever made. Without a doubt!

The minimum required vocabulary at the beginning of the second unit is fifty nouns (you will understand why soon). Children do not need to have verbs or adjectives because you cover these parts of speech later in the unit. They need to be able to read and write these nouns, but, for children delayed in fine motor, I would certainly try this method with magnetic letters! 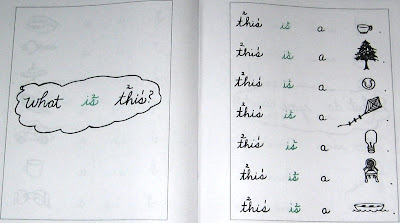 Here are the official seven steps listed in the manual in my words (there are only six because one of the original seven gets dropped when you move to the second unit). I modified these steps with Pamela, but this summarizes what the manual recommends:

Activity 1:
Reading the Child's Book - The educator observes the child read the stories in her individualized book (all pictures in this blog are examples of said stories) and monitors her pace and articulation and ability to read from top to bottom and left to right.

Activity 2:
Syntax Review - The educator writes an appropriate number of sentences with the new syntax on the board (four to six or more). The child reads the sentences in three passes broken down into the reading step, the lip-reading step, and the acoustic step.

a. Reading - The educator points to each word in a sentence and the child reads it aloud. Then, the child turns around and repeats the entire sentence from memory. The child performs this step for each sentence on the board.

b. Lip-Reading - The educator reads a random sentence from the board. The child points to the sentence, reads it aloud, turns around, and repeats it from memory. The child performs this step for each sentence on the board in random order.

Activity 3:
Oral Recall - The educator shows a picture of a noun, and the child says a sentence using that noun with the syntax of the week. They work through several pictures in this manner.

Activity 4:
Writing - The educator writes a story in cursive and the child copies it onto lined paper. (The manual has adaptations for children whoare still learning to write.)

Activity 5:
Written Recall - The educator gives the child a picture (or series of pictures), and the child writes her own story, using the syntax already mastered.

Activity 6:
Dictation - The educator slowly says a story, sentence by sentence, as the child writes it on paper.

Other Activities
Games - While playing games, like Go Fish and Concentration, the child and educator can practice new and old syntax. This can even work well with commercially available games, too.

Pretending to Be Teacher - The child and educator switch roles!

Daily Activities - Educators can looks for opportunities throughout the day to apply the new syntax and reinforce the syntax already learned.

I made the following modifications to suit Pamela. Because she already knew phonics, I did not teach the Northampton symbols. Because she could read chapter books, I wrote the nouns as words in the sentences and put the pictures on the question page and began sentences and questions with a capital letter. Here is the very first story we read and seeing it brings back memories for me! I applied the "seven steps" from a Charlotte Mason perspective, so I modified it from the book a bit. We focused on the sentence only at first. I believe I used to spend about a week on this sentence (some new syntax took two weeks, or longer). Notice that the first sentence taught is "This is a" which limited me to singular countable nouns that begin with a consonant. Pay attention to the color coding because you will soon see a pattern that green signals the syntax du jour. (Click the picture for a larger view.)

If you haven't already guessed, I am a principles-oriented thinker which I believe is the common element present in all three ways of thinking. I have tried to coalesce them into one (RDI, Charlotte Mason, and the Association Method). When I was processing the Association Method, I tried linking it with a Charlotte Mason point of view and, after careful reflection, realized that all I needed was a minor translation. Every day, we cycled through these steps, focused on the new syntax. The very first week we focused on "This is a" stories:

Once Pamela mastered "This is a _____" we moved onto the question it answers: "What is this?" I believe we spent a week on the question before moving onto the next piece of syntax, the article an. While we stuck to singular countable nouns, this time we focused on nouns beginning with a vowel. Again, the color green spotlights the most important syntax is an. Because the question for this second sentence structure is the same ("What is this?"), we practiced the sentence and question side by side, both Pamela asking and answering the question.

In the next step, we combined both kinds of sentences, "This is a _____" and "This is an _____" to make sure she had mastered the difference. Because Pamela had an eye for pattern and already knew the difference between consonants and vowels, we only spent a week on this kind of story. I imagine younger or less experienced children might take longer. You have to be absolutely sure the child is able to say the syntax correctly very consistently before moving onto the next level. This looks startling easy to us native speakers, but, for kids like Pamela, still learning English as a first language, it is surprisingly difficult. I found when I pushed Pamela too fast, her syntax fell apart! Seeing that happen several times convinced me that she really did have aphasia.

I believe we spent another week on the question before moving onto the next piece of syntax, the article some which went with mass nouns. Again, the color green spotlights the most important syntax is some. Because the question for this third sentence structure is the same ("What is this?"), we practiced the sentence and question side by side, both Pamela asking and answering the question. 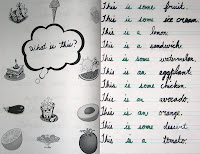 For her, the cliff notes looked like this (new in green and review in black) but remember some kids may progress more quickly or more slowly than this timeline:

If you are impatiently chomping at the bit, wondering if a child could ever get far progressing through syntax at such a slow rate, one structure at a time, take a peek at Pamela's latest unedited nature notebook entry she composed with no input from me and you will see how far a child with severe language issues can go when you find the right method of her!

Because this post is very meaty, I will pause here and let you digest this introduction to the second unit of language. While I have only covered one sentence and one question, the next five will flow much more quickly, now that we have gotten through the methodology of actually teaching one structure. Some of you RDI families may be thinking this is dull and deadly and down-right static. These are very valid points to consider. In Part II of the second unit, I plan to reflect on how one can view this from an RDI perspective!
Posted by walking at 10:40

Tammy, this is SO incredibly helpful. Thank you SO much for breaking things down and translating them into English, and for the PICTURES!!! I have no idea how you manage to find time to do all that you do with Pamela and also share with all of us out of the kindness of your heart. You are a true heroine!!!