Score One Victory in the Whac-A-Mole Game! 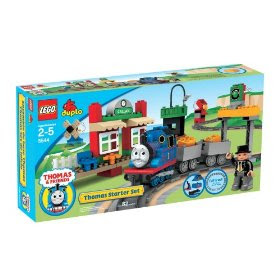 Baby David's gift, a Thomas the Train Duple Starter Set, arrived in the mail, so Steve and Pamela opened it yesterday. Pamela was excited but not over the top like she was with Baby Alive's gift, probably due to the nature of the gift more than anything we have done! The goal for Steve was to slow down and use nonverbals. He did a fantastic job and even gave her space for thinking and responding. Pamela referenced me a lot at first, but then shifted to Steve!On the Whac-A-Mole Game front, Steve practiced how to guide Pamela when uncertain about whether or not he goes to work and what time he leaves. He talked her through various scenarios and did some role-playing. Pamela was very attentive: she played along but gave real signs of her displeasure at moments of uncertainty.
How did today go? GREAT! Last Monday was a very difficult day because of uncertainty and Steve's job. Today, we had nearly the exact same scenario as last week, except last Monday was miserable for us all:


He was not sure whether or not he would make the long commute to work or work from home today. Pamela was not happy. She could have handled a decision one way or another or a time at which he planned to make his decision. Steve truly did not know all morning, so it gave me the opportunity to work on guiding Pamela's thinking about not knowing. I was not entirely successful at helping her stay calm because we were addressing one of her high level anxieties. She went through about three cycles of fifteen-minute crying spells! . . . It was a very difficult morning seeing her struggle with this, but it was true uncertainty lurking beneath all of the tears. The funny thing is that Steve ended up leaving to go to work but only went to a wi-fi spot in town. He was home in an hour, which she knows is implausible.

Today went much, much better! This morning was also ripe with uncertainty. Pamela did much better because we all gave her the calm neutral affect about when Steve was leaving for work. He really wanted to stay in town and attend a luncheon featuring the new sheriff. So, he left the house at 10:00 to find a place to work in town. Both of us worked to keep Pamela regulated. For example, Steve told her he would be able to answer her question at 9:30. I had to leave for a dental cleaning at 9:20 and could not run interference. So, I suggested she could take a shower and she agreed.

Steve came home "from work" early and Pamela was not happy but she did not scream and cry like last week. She knew he never left Manning. He had to run errands and he invited her to join him. When they returned home, Steve needed peace and quiet for a conference call so Pamela and I went to my folk's house.

We did not whack the anxiety mole into the ground forever, but today gave us hope.
Posted by walking at 21:48

what a team! i see now, why u're such a stable & grounded front in pamela's world - u have that wonderful front line support from ur hubby! just lovely! way 2 go pamela - u were so cool in that video & it sounds like u were pretty darn cool 2day too!

Wow Steve, that was awesome!

Steve is really coming along. Our consultant noticed the same thing!!!