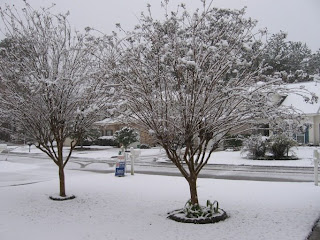 Snow Showers:
I am gearing up for the possibility of snow showers tomorrow. Pamela knows that it sometimes snows in weird places like Louisiana (last month, Steve's parents who live there snapped this photograph). Having lived in Minnesota, Pennsylvania, Connecticut, Colorado, and Alaska, she definitely knows what snow is and what it means. However, she does not expect snow here in our town. I have my handicam ready for any more conversations on uncertainty, bright and early tomorrow morning. 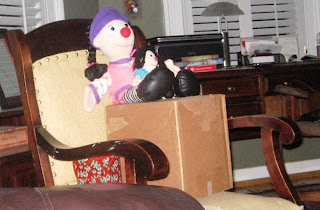 Loonette and Molly:
Two weeks ago, Pamela and Baby Alive opened presents that completely overwhelmed her! For two weeks, she has not been able to do anything more than take a quick peek in the boxes and run off. Last night, Steve decided to take the two dolls out of the box and Pamela did not freak out and smiled at us. However, we noticed that Pamela was not able to sit in the same room with them. So, tomorrow, I plan to move them into a different room to see if the pattern continues.

Stay or Go:
Pamela had a very tough morning. Steve was concerned about two things on the home front: a heating unit that had ice on it and contractors making preparations to pour a driveway. He was not sure whether or not he would make the long commute to work or work from home today. Pamela was not happy. She could have handled a decision one way or another or a time at which he planned to make his decision. Steve truly did not know all morning, so it gave me the opportunity to work on guiding Pamela's thinking about not knowing. I was not entirely successful at helping her stay calm because we were addressing one of her high level anxieties. She went through about three cycles of fifteen-minute crying spells! Here is what I tried:It was a very difficult morning seeing her struggle with this, but it was true uncertainty lurking beneath all of the tears. The funny thing is that Steve ended up leaving to go to work but only went to a wi-fi spot in town. He was home in an hour, which she knows is implausible. She told me that her dad did not go to work. She was fine and laughing when I told her it was a joke and gave her a big wink. More than anything, I think she was okay because he had finally made a decision!

Trigger Words:
Another element of uncertainty revolves around trigger words, or words that create such anxiety in Pamela that she automatically overreacts with loud and high-pitched screeching. Usually, she does this when she is playing on the computer, watching television, or listening to a conversation on the phone. Our consultant quickly spotted the consistent pattern in all of these incidents: Pamela had only part of the story! So, my objective is for her to learn how to create space around the trigger word to give her time to apply some whole-part thinking before reacting.

In the following two videos, we talk about Pamela's reaction to trigger words. Because I had her full attention, she did not scream when I said her trigger words. She enjoyed the topics we picked and stayed calm and neutral the entire time. She did not seem anxious or worried. She gave thoughtful answers, except when she was quite tracking with me. Sometimes, Pamela automatically replied "because I said so" which I think is a substitute for "I have no clue". However, once I rephrased what I was saying, she usually gave me a thoughtful reply. She especially loved the story about "selling the dogs" and enjoyed practicing hearing me talk on the phone. She usually does not talk that much when I am on the phone, so she knew it was pretend.

i am constantly amazed at the progress u r making with pamela! it warms my heart & i get so excited when u've posted a new video! ;0)

You are one heck of a mama!!

It is amazing when you compare them to videos from two years ago where I had to do cartwheels to get her attention!!!

Hi there! I just found your blog last night. At this point I don't even know how. I just know that I am newly trying to incorporate Ambleside Online into our homeschool, and from the group I surfed to a website, then to another website. I ended up at your blog.

Anyway, I just wanted to tell you how inspiring your work with your daughter is. I have a dyslexic son but I realize our challenges pale in comparison to what you are doing. My hat is off to you and I look forward to reading more of your blog.