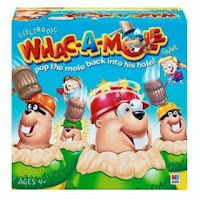 Last November, Pamela let go of her 18-month infatuation with the sacred hour right around the time we started working on uncertainty. Now, we are working on helping Pamela handle trigger words, which are also related to the uncertainty found in staying on one house, getting sick, etc. Our RDI consultant pointed out that Pamela's anxieties are like the Whac-A-Mole game: when Pamela discovers she can live one category of anxiety, another pops up. We suspect that she is testing out various areas of her life and we hope she will make the big milestone discovery: when you feel anxious, you can stop, watch and listen, think, reflect, change your thoughts, stay calm and neutral, realize you only know part of the story, and/or read the body language of people around you. The new anxiety revolves around whether or not Steve plans to make the 2.5-hour round trip to the office and, if so, what time he plans to leave. Steve and I have work to do on this over the weekend, and I will share how it goes next week.

I have not talked about Charlotte Mason in awhile, but what we are really doing is working on habits of the mind, one she did not cover. I find many of Charlotte's thoughts on habit training helpful:

But habit, to be the lever to lift the child, must work contrary to nature, or at any rate, independently of her.

Pamela's initial inclination is to overreact to uncertainty. What we are doing is building a lever she can use to lift herself out of the habit of melting down when uncertain!

How is the dilatory child to be cured? Time? She will know better as she grows older? Not a bit of it: "And the next, more dilatory" will be the story of her days, except for occasional spurts. Punishments? No; your dilatory person is a fatalist. 'What can't be cured must be endured,' he says, but he will endure without any effort to cure. Rewards? No; to him a reward is a punishment presented under another aspect: the possible reward he realises as actual; there it is, within his grasp, so to say; in foregoing the reward he is punished; and he bears the punishment. What remains to be tried when neither time, reward, nor punishment is effectual?

Like Charlotte, I prefer working on Pamela's thought life rather than an elaborate (and what I would find exhausting because of my inconsistency) system of rewards and punishments. Nor do I wish to endure her overreactions because they are as hard on her as they are on us!

That panacea of the educationist: 'One custom overcometh another.' This inveterate dawdling is a habit to be supplanted only by the contrary habit, and the mother must devote herself for a few weeks to this cure as steadily and untiringly as she would to the nursing of her child through measles.

Every day Steve has the opportunity to go to work, we have an opportunity to replace the habit of overreaction with new habits (the ones listed earlier). I will need to be very consistent in nursing her through this while Steve will need to work on avoiding QPCs and slowing down long enough to help her learn new habits.
Posted by walking at 22:53

Easy to talk about NOT easy to implement. Yup. I've never seen a Whac-a-Mole board game!!

"when you feel anxious, you can stop, watch and listen, think, reflect, change your thoughts, stay calm and neutral, realize you only know part of the story, and/or read the body language of people around you."

if only I could do that LOL
amy