Education is the Formation of Habits

Charlotte Mason believed that habit is the instrument by which parents work, much like the wheel is to the potter. Not only that, habit is the chief instrument of educators: "The formation of habits is education, and Education is the formation of habits" (page 97). Her six-volume series is peppered with ideas about habit training, with the most details found on the following sections:
Volume 1, Parts III, IV
Volume 3, Chapters 10, 11, 12, 13
Volume 5, Part I

Sometimes, reading through the series is like a treasure hunt. Even though most have an index and I can always perform advanced searches for keywords online, I always wonder if I have overlooked a jewel of a thought. Sonya Schafer at Simply Charlotte Mason has put together a wonderful collection of all of Charlotte's writings on habit in one book, appropriately titled Laying down the Rails! She has compiled every habit mentioned by Charlotte and sorted them by category. She leaves room for notes in the margins, outlines the formation of a habit with the example used by Charlotte Mason of shutting the door behind you, and includes a checklist plus inspiring quotes and thoughtful questions for each habit presented.

I have found other resources to be invaluable in habit training: Hints on Childhood Training (an oldie, but goodie) and, for people blessed with strong-willed children in their lives, You Can't Make Me, But I Can Be Persuaded. 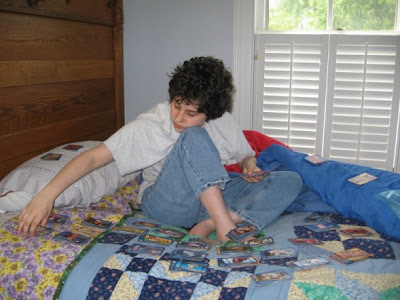 Originally, I had planned to outline the training of a habit, but Pamela's self-directed demonstration the habit of orderliness got me sidetracked. Today, when I walked in her room, she was busy sorting all of her Disney charade cards by movie, something she has never done before today. To the left is a close-up of one batch. This is the kind of thing I started seeing more often after I formed my own habits of habit training and masterly inactivity.
Posted by walking at 21:42