One of five essential elements of dynamic intelligence defined by Relationship Development Intervention is episodic memory:

The ability to reflect on past experiences and anticipate potential future scenarios in a productive manner. Developing an internal mental "space" to consider, reflect, preview, prepare, regulate, evaluate, hypothesize and dream.

On page 310 of the book My Baby Can Dance, Dr. Gutstein defines episodic memory as

. . . a representation we form of an event in our lives, strongly anchored by an emotional appraisal of that episode, that we use to form a sense of ourselves and to anticipate our future. Episodic Memory is very different than just remembering the details of a past episode.

Definitions like the two above are not very helpful when trying to incorporate lifestyle changes that develop episodic memory. The RDI Protocol states that Memory Journals can strengthen episodic memory, so I decided to make a recipe book that would encourage Pamela to anticipate future cooking experiences. The last section of her cookbook is for material to develop episodic memory. I wrote a very long and detailed experience story describing the exact steps we took and highlighted exciting emotional moments, such as when a pan unexpectedly crashed or when Pamela discovered cocoa without sugar tastes bitter. When I shared it with one of my dear friends who is also doing RDI, she gently hinted that my approach may end up being too static and could end up being another (of many) scripts in Pamela's life. Even my second rewrite was something she kindly suggested we read one or two times and store in a file. I am so thankful for the wisdom she generously shares because I think my third take was a winner!

Since we are flying by the seat of our pants without a consultant, I began to scour the Internet for ideas. On page 11 of a presentation, I found more clues:

This type of memory has three components: the raw pieces of data (the event itself), the emotions we experience and the meaning we extract from the interaction of these two components. Very often people on the spectrum will be able to recount the events that happened and perhaps the emotions they felt at the time, but they will have difficulty tying the two together to form a base of reference for remembering past events and evaluating future experiences.

I definitely had raw data in the form of digital recordings filmed by Pamela's brother David. It faithfully recorded the event itself and the emotions we shared verbally. I found some ideas in a thread at the one of the RDI forums. The key is to spotlight emotions and people! I copied static images from our digital recording, placed them into Excel (because I can line up the images more easily), and wrote a simple title. 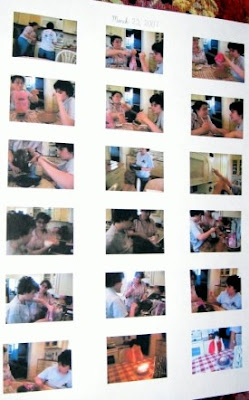 Then came the moment of truth about whether or not Pamela has the gaps in episodic memory described by Dr. Gutstein. Pamela and I sat down and talked about baking a cake on her birthday. I filmed it for review later and was amazed at how factual her memory is. I had to draw out emotional highlights of that experience. She began with, "I bake the cake. I can bake. The pans go to oven."

At that point, I tried to draw out her memory of the pan that crashed, which was an emotional highlight of baking that day. She recalled, "Big sound." To tap into her emotional memory, I said, "I laughed. And you?" She replied, "I'm happy. It got banged. I made the cake." Hoping she would recall that she thought it was magic, I reflected, "I thought it was gravity." Pamela did not remember her comment about it being magic (which was the moment her face showed the greatest emotion during our baking).

Another fun memory of baking was when David said the batter looked like mud. When I recalled that memory, Pamela agreed, but showed flat emotions. She also showed a distasteful look when she felt the slimy egg (noticed by David while filming). I commented, "I don't like the feeling of eggs." Her observation was, "It's sticky", but she did not recall how she felt about touching sticky eggs. Then, I made a face to show my disgust, which she interpreted as anger.

I am starting to see how Pamela anchors very little of her memories with emotional appraisal and going beyond the details is a challenge.
Posted by walking at 18:08